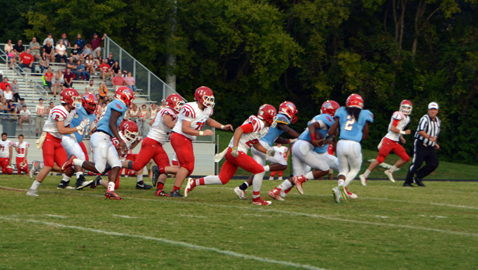 PHOTO BY DAN ANDREWS
Austin-East scoops and scores a defensive touchdown on this play to take the lead against Halls Friday night at A-E. The Roadrunners won, 46-22.

Austin-East quarterback Darius Harper is known for his passing arm, but it was his legs that broke Halls’ back Friday night.

After the Red Devils had rallied to within eight points of A-E early in the fourth quarter, Harper avoided being thrown for a huge loss and ran into the end zone from 40 yards out to give the Roadrunners breathing room on their way to a 46-22 win at Sam Anderson Field.

On the key third-and-three play at the Halls’ 25 yard-line, Harper was chased back to near the 40, where he broke loose from would-be tacklers, got going in the right direction and battled his way across the goal line.

“The score was getting close and I had to do something,” said Harper, a 6-3, 195-pound junior. “When I need to, I feel I can get out of the pocket and scramble a little bit.”

On the ensuing 2-point conversion, Harper dropped back again, saw an open field to his left, tucked it and ran it in to give Austin-East a 16-point command.

A-E defensive back Xavier Ligon delivered the knockout punch on Halls’ next possession with a 58-yard interception return to the 2. It was the Roadrunners’ third big defensive play of the game and running back Gedarian Mobley cashed in with 5:47 left.

The win lifted Austin-East to 2-0 and the public address announcer at George “Dusty” Lennon Stadium often said during the game that “the winning tradition has returned.”

“It was a big win for our confidence and our fans,” said Harper. “The past two years haven’t been so good and we’ve known that. We have just put in so much work for this year, and I think it’s going to be a big year.”

The Red Devils looked impressive as they drove 64 yards in six plays on their first possession to take a 7-0 lead. A 41-yard screen pass from Andrew Davis to Matthew Runge-gold set up Hutson Woods’ TD dive from the 1.

A-E’s offense answered with a three-and-out. But freshman linebacker Jatwan Forbes got the Roadrunners going when Halls attempted another screen pass on their next possession. Forbes picked off the deflected pass and returned it 23 yards for a touchdown to cut the Red Devils’ lead to 7-6.

“We just woke up,” said A-E Coach Jeff Phillips. “I think the defense decided to wake up and get some turnovers and that was huge for us.”

Austin-East’s big-play defense struck again when freshman linebacker Robert Allen forced a fumble and junior linebacker Tim Forbes scooped it up and returned it 60 yards for a TD, giving A-E a 12-7 lead.

After Halls had a 76-yard touchdown pass nullified by offensive pass interference, the Roadrunners’ offense got in on the big-play stuff with Harper hitting a wide open Kashif Warren Jr. for a 67-yard TD play. It produced sound effects, too. Beep! Beep!

A 3-yard keeper up the middle by Davis increased Austin-East’s lead to 24-7 midway through the second quarter.

A defensive stand – stopping Halls on fourth-and-one at its 43 – gave A-E good field position. The Roadrunners wasted no time scoring, either, as Harper and sophomore Kajuan Hale-Ligon hooked up on a 44-yard TD play. That made it 30-7.

A 57-yard kickoff return by Runge-gold gave Halls a spark and the Red Devils got their second touchdown when Caden Harbin dove for the pylon to complete a 6-yard pass from Davis. That made it 30-14 at the half.

After a scoreless third quarter, Halls drove 42 yards and got within eight when Woods slashed over from the 1. Davis tossed a 2-point pass to Nick Gangloff, making the score 30-22 with 10:18 remaining.

That set the stage for Harper to show he wasn’t just a passer.