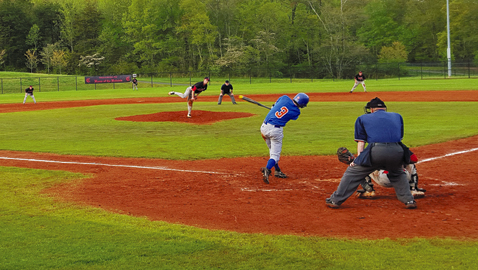 Photo by Dan Andrews.
Campbell County center fielder Brandon Miller swings at a third strike from Central reliever Alex Haynes. Miller was one of six strikeout victims for Haynes, who threw two scoreless innings and helped the Bobcats seal a 6-3 win over the Cougars.

The Bobcats entered the bottom of the fifth facing a 3-1 deficit against District 3-AAA rival Campbell County and plated four runs to take  a 5-3 lead and went on to nab a 5-3 win over the Cougars on Bud Bales Field at Tommy Schumpert Park.

“I think we thought that we were just come out and win this game,” Central coach Matt Byrd said. “This was a tough game for us and I knew that it would be because they’re well-coached.”

The Bobcats may have won the game, but early on they struggled.

Campbell County (6-14 overall, 0-6 in the district) scored a run in the top of the first inning.  CCHS starting pitcher Tate McGhee opened the frame with a double and later scored when Virgil White singled.

McGhee also had a stellar first three innings on the mound as he retired the first nine Central hitters he faced.

The Bobcats (17-6, 6-4) threatened to score in the fourth but left the bases loaded and came up empty when McGhee got Central’s Bass Cooper to fly out to end the frame.

Meanwhile, the Cougars plated a run in the third. CCHS took a 2-0 lead when an RBI single from shortstop Matt Ogden scored McGhee, who singled to lead off the inning. Campbell County extended its advantage to 3-0 when an error by Central allowed Max Farris to score. Farris had a one-out double before coming home with the Cougars’ third run.

The Bobcats got on the board in the bottom of the fourth inning.  Catcher Jackson Greer opened the frame with a double and came home on a sacrifice fly by Bradley Clark. Central, however, squandered a chance to tie the contest when it stranded a pair of runners in scoring position.

Central finally took the lead in the fifth. In that frame, Greer had an RBI double. Clark had a two-run double and Alex Haynes drove in a run with a sacrifice fly to give the Bobcats a 5-3 lead.

Central got another run in the sixth on an RBI single from Cooper.

Bobcats’ reliever Andrew Biddle, who got the win, gave way to Haynes in the sixth. Haynes responded by striking out six (and walking two) over the final two innings.

“Hats off to Campbell County,” Byrd said. “They came in and did a good job they played well and they had nothing to lose.”

Byrd also lauded the effort he received from Haynes on the mound.

“This is the first time that we brought him in in relief since I’ve been here and he stepped up,” Byrd said.