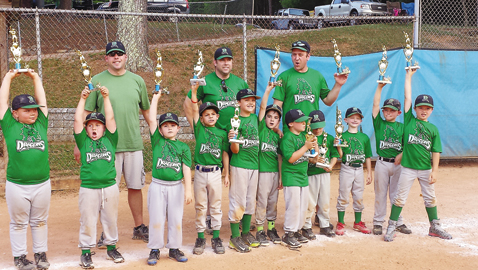 The Dragons, who had five players selected to the all-star team, may have finished on top in the 6, 7 and 8-year old coach pitch league. Early on, however, first-year head coach Justin Kittle wondered just how far his squad could go.

“When we started out, it was kind of iffy,” Kittle said. “We won a few game but we lost more games than we won. I think we had three wins and five losses and I decided to make some changes and I had my 8-year olds playing in the field.

“After I did that, we won eight games in a row. This was my first year as a head coach and it was great to see this whole team grow as baseball players. These are young kids and they’re all playing the game of baseball for the first time. For them, the game is fresh and it is pure. These kids just want to play. They just want to be out there.”

Five Dragons were selected to represent the Karns Community as all-stars and Kittle was extremely pleased with that.

“This season was a lot of fun and it was great to see these kids become good baseball players.”