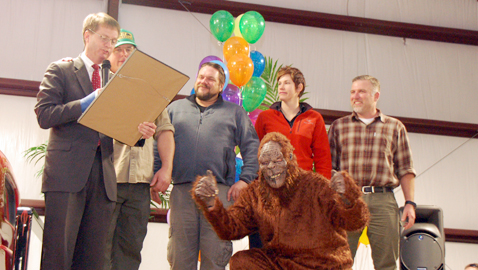 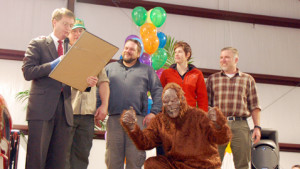 By Tasha Mahurin
mahurint@knoxfocus.com
Traffic lined Clinton Highway and uniformed officers were on-hand to direct traffic last Friday night when well over 1,000 people came to Powell Auction to ring in the proclamation of the official Knox County Bigfoot Day.
After a brief ceremony, Knox County Mayor Tim Burchett and the cast of Animal Planet’s “Finding Bigfoot” greeted fans, signed autographs, and posed for pictures.
People from all across Tennessee and at least five surrounding states including Kentucky, North Carolina, South Carolina, Georgia, and Alabama turned out for the event. One family in attendance flew in from a northeastern state to be a part of the event. Matt Moneymaker, James “Bobo” Fey, Cliff Barakman, and Ranae Holland, stars of the hit series, graciously greeted them all for well over two hours.
The cast and crew were in town until the end of the weekend as they filmed an episode here in Knoxville. For those interested in local investigation, Matt Seeber of East Tennessee Bigfoot was also on hand to answer questions and provide information on local sightings. The Knox County episode is to air in the spring.
The event proved to be fruitful for the organization. “So far we’ve officially got 30 confirmed reports to further investigate,” Seeber told The Focus.
Seeber explained that due to overwhelming sighting reports, the group schedules an in-person interview only after carefully considering the validity of the evidence and the relevance of the sighting received via phone call or email. If those things “check-out,” the group then requests permission to conduct an investigation of the property or location where the sighting occurred.
Many attendees expressed interest in joining the group.
“We’ve had about seven or eight people who have asked to join the group tonight,” Seeber said.
He added that the East Tennessee Bigfoot organization would open for membership, most likely through Facebook, before the end of the year. Applicants who specialize in biology, environmental science, or hunting and tracking will be given preference.
The two hour event was free and open to the public. In addition to a meet-and-greet, attendees were treated to face painting, a bounce house and live bluegrass, courtesy of event sponsors Powell Auction, Steve Hunley and The Knoxville Focus.