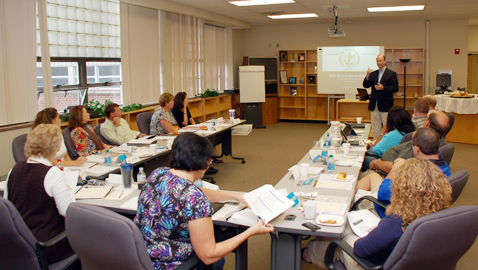 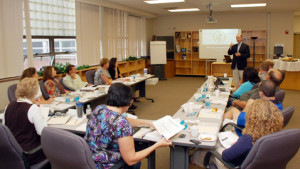 Photo by Dan Andrews Superintendent McIntyre addresses the School Board during their retreat.

Members of the Knox County Board of Education, along with Superintendent of Schools Dr. James McIntyre, met at the Sarah Simpson Center Sunday, September 16 for their annual retreat. Every member of the Board was present to discuss an agenda outlining the future for the school system and share ideas.

So much time was spent discussing the strategic plan, especially by Karen Carson, Indya Kincannon, and Lynne Fugate, that the agreement between the Board and the Superintendent was put off to a future workshop meeting.

Late in the afternoon, the Board finally began discussing the budget and working with the County Commission. The Commission is the funding body for the school system. Fugate, the Board’s new Vice Chair, stated she believed part of the failure of the last budget might have been due to the perception that the budget as presented seemed to be entirely that of Dr. McIntyre, rather than the Board. It was a fair assessment as McIntyre formulated the budget and presented it to the Board of Education to be ratified.

McIntyre presented an ambitious budget for the next five years, fueled by significant tax increases. Fugate’s speculation seemed to be a tacit admission by some Board members that McIntyre has had little success throughout his tenure in acquiring new funding from the County Commission.

Mike McMillan, East Knox County’s member of the Board of Education, asked if anyone really believed a tax increase would be perceived differently by the public whether it was proposed by the Board or the Superintendent. When asked, McMillan confessed, “It might make Board members more responsible in terms of elections and perhaps provide some cover for the Superintendent, but I doubt much.”

McMillan, the only former member of the Knox County Commission to serve on the Board of Education, pointed out the next budget will be the last to be approved before the Commissioners and the Mayor have to face the voters in an election.

The same is true for four members of the Knox County Board of Education and there is reason to believe support for increasing taxes, especially in a dismal economy, is taking its political toll. In a poll inside South Knoxville Board member Pam Trainor’s district, almost 80% of likely voters said they would not support her for reelection. Slightly over 20% indicated they would vote for Trainor again. Amongst seniors, the most consistent voting bloc, Trainor’s support fell to just about 15%.

Thomas Deakins, former Chairman of the Board of Education, expressed his hope that Mayor Tim Burchett would help the school system, due to the Mayor’s love for children. Burchett had adamantly opposed any tax increase this year and threatened to veto a budget containing any kind of tax increase.

As Board members pondered this year’s failed strategy, McMillan pointed out the elephant in the room, noting the school system had the strong support of The Knoxville News-Sentinel, which editorialized constantly on behalf of the tax increase. The Chamber of Commerce hurriedly put together a $40,000 advertising campaign during the last two weeks of the budget process, but it fell flat and not a single member of the County Commission made a motion to increase taxes.

McIntyre was oddly quiet during the conversation about taxes and budgets. McIntyre also seemed stung when South Knox Board member Pam Trainor echoed a complaint long sounded by Mike McMillan regarding the flow of information from the Superintendent’s office and staff.

Trainor said while she didn’t expect information to arrive within “five hours”, she didn’t think it should take “five days” to arrive either.

Board members continued to ponder on just what figure might be appropriate to seek from the County Commission and the Mayor. Indya Kincannon complained she didn’t want to have to choose between increased pay for teachers and technology. Kincannon was supportive of asking for all the money the school system wants and perhaps a “hybrid” of property tax and sales tax increases could cover the costs.

As the Board members departed the meeting to enjoy supper together, one thing seemed certain: they will be coming back for another tax increase.