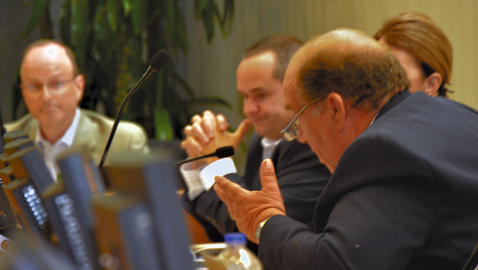 At last Wednesday’s Board of Education Meeting, 8th District BOE member Mike McMillan asked to call for personal privilege to postpone the vote on the 2020 Strategic Plan. After a brief consult with Dr. McIntyre, Chair Lynne Fugate shakily replied, “It may come to no surprise to you that I intend to deny personal privilege… I guess you can ask the board to over-rule me”

McMillan compared the current board to a lame duck congress. He said it is rare to invoke personal privilege, and rare to deny it. He asked the BOE law director, David Sanders, “Does the chair have the right to do that? It was my understanding that we always had abided by it being an automatic privilege that any member could exercise, going back more than two decades.”

Sanders responded, citing Board Policy BCBD, said “any member of the board may postpone an agenda item for one month, unless the Director of Schools, and the Board Chair, declare the need for emergency action at any time. There is no further clarification within the policy.”

Before he asked for the delay, McMillan had confirmed with Dr. McIntyre that there would be no penalties, fines, or loss of funds associated with delaying the vote. McIntyre said, “It is a document that speaks to our strategic direction as a school system. A document that guides our educational decision-making and work that we do on a day to day basis… Having our strategic plan in place will be very beneficial.”

McMillan asked, “If it were to be delayed 60 days, it would not have a significant impact on us not having school.” When McIntyre asked what he meant, McMillan clarified, “if it was to be put off, we would have school open up, we would do the things we normally do… I assume if we had to have some plan, we would temporarily operate under the old plan.”

McIntyre countered, saying “The reason we have a strategic plan is that we have developed a vision and a strategic direction that we can work toward and move toward… We have 8000 employees in Knox County Schools, each of whom makes hundreds of decisions every day that impact the education of our children and the direction of our school system. I think it is vitally important that we have a plan in place that can guide them in those decisions.”

McMillan said “I don’t think that those employees, or the children, are going to be significantly impacted if we did not have a new plan in place for 30 or 60 days. That’s my opinion, you are entitled to your opinion.” That’s when he asked for personal privilege to delay the vote.

McMillan wasn’t alone in wanting a delay in approving the 2020 Strategic Plan. At both Monday’s work meeting and Public Forum on the agenda item at Wednesday’s meeting, several speakers asked that more time be given for public input and review of the plan, which was still undergoing revision as recently as August 1.

On Monday, Dave Gorman, Co-President of Students, Parents, and Educators Across Knox County (SPEAK) outlined the process that SPEAK followed to come up with their 77 page response and recommendations to the proposed strategic plan.

Gorman highlighted several of the recommendations in the SPEAK document, which can be viewed at SpeakTN.com. He also said that SPEAK members would be available after the meeting to discuss any aspects of the plan, and noted afterwards that Indya Kincannon and he talked for around 20 minutes.

Mark Taylor, who spoke at both meetings, was more direct in his remarks Wednesday. He said that in response to some pointed questions by the Board about the Strategic Plan [regarding the proposed Regional Support Structure], the Superintendent was “evasive and even misleading with his answers to the Board, and by extension, to the Public.”

He also cited a lack of trust, transparency, and truth regarding the Superintendents claim that KCS worked with “Students Parents and Educators to reconcile vast community input into the Strategic Plan.” He said that very little of SPEAK’s plan was added to the current revision, calling it an “obvious attempt to appease.”

Taylor gave additional examples of lacking trust, transparency and truth, including the PR spin on TCAP scores, a “special call” meeting August 18 to discuss Dr. McIntyre’s evaluation, and the absence of minutes from the Teacher Advisory Group meetings.

Dr. McIntyre and the BOE claim that their Regional Support Structure is simply a twist on the existing support structure that is currently in place. McIntyre said that it is about bringing support to principals, and that some of the testimony given amounted to a “conspiracy theory,” and that it was “inaccurate and irresponsible speculation.”

However, one only need look to the other end of the state to see how this model plays out in the real world. Metro Shelby County’s Achievement School District claims to “Build the possible by moving the bottom 5% of schools in Tennessee to the top 25% within five years.” Schools either become charter schools or are run by the ASD. Math scores were up slightly, yet at the end of year two, reading scores were still lower than they were before the state intervened (in 2012).

New Orleans has a similar model in the Recovery School District. At the end of 2014, the crescent city had no public school remaining in the RSD. Public schools had either been closed, or turned into Charters. The guidebook for mass school closings originated from the controversial Broad Academy, ‘School Closure Guide’ 2009. McIntyre is a Broad Academy Superintendent. Coincidence? You decide.

Last Monday, numerous media outlets reported “Knox County teachers are finding common ground with KCS administrators,” but whatever illusions of improved relations between the BOE and teacher groups may have appeared after Monday’s work group meeting evaporated by Wednesday.

Karen Carson became especially agitated in Wednesday’s meeting, taking issue with several of the concerns speakers had raised, including minutes from the Teacher Advisory Group, the timing of Dr. McIntyre’s evaluation, Board transparency, and the Regional Support Structure.

BOE members felt that the plan was given plenty of time for community input and review (despite finalizing the current version of the plan on August 1), and pointed out that it is “only a plan,” some referring to it as a “living document” that could be changed at will by a new BOE.

Finally, after an hour and a half of discussion, the BOE voted to approve the 2020 Strategic Plan. The vote was unanimous. Mike McMillan voted yes, but using a procedural technique, vowed that he would bring the plan up for discussion again next month.

The “emergency” was averted. The vote was held, and the plan was approved. This BOE did nothing to restore their tarnished reputation with teachers or citizens of the Knox County community. Fugate’s smugness as she pounded the gavel, saying “meeting adjourned” said it all.  “We won. We got our plan approved.”

There is just enough vagueness in the 2020 Strategic Plan to give the Superintendent the power to do pretty much anything he wants. But there has been significant change in the makeup of the Board. The new BOE members will not be a rubber stamp for McIntyre’s agenda.

Now it is up to the public, along with the new board members, to ensure that the parents, teachers, and students of Knox County win a few, too. Enough of the imperial board.