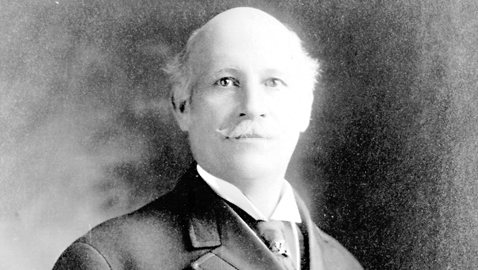 From the author’s personal collection.
Robert Love Taylor of Tennessee, original in Library of Congress.

Senator Kenneth D. McKellar once claimed that outside of the three men who served as President of the United States, Robert Love Taylor was “the best-known man to the Republic at large that Tennessee has ever produced”. It well may have been true.

Robert L. Taylor certainly enjoyed almost unparalleled success as a politician in Tennessee, serving as Congressman, three-term governor, and United States senator. When not earning his living through public office, Bob Taylor entertained audiences on the platform with his speaking ability. During his time, certainly hundreds of thousands of Americans heard Bob Taylor speak. Taylor earned hundreds of thousands of dollars from his speeches, but was frequently careless with money and therefore compelled to speak even more often.

Born on July 31, 1850, Robert Love Taylor was the son of Nathaniel Taylor, who served as a Congressman from Tennessee’s First District and would later be Commissioner of Indian Affairs in the administration of President Andrew Johnson, all the more remarkable as the elder Taylor and Johnson had opposed one another to represent the First District in Congress. Taylor’s mother, Emaline, was the daughter of a Confederate senator. Nathaniel Taylor had been a Whig, member of the Union Party and finally, a Republican. Robert Love Taylor chose to follow his mother’s side of the family and became a Democrat. His brother Alfred, with whom he would battle for the governorship of Tennessee was, like their father, a Republican.

When the Confederate Army occupied East Tennessee, much of which supported the Union cause, the Taylor family took up residence in Philadelphia. After the war, the Taylors returned to Tennessee and young Bob tried his hand at several business enterprises, but never really made a success at any of them. In fact, Taylor was no better at running an iron forge belonging to his father than he had been at farming or operating a lumber mill. Eventually, Bob Taylor earned the right to practice law after “reading the law” with a local attorney.

Robert L. Taylor found his true profession in 1878 when his brother Alfred was waging a hard campaign for Congress. Alf found himself locked in a bitter contest with a politician with the arresting name of Augustus Pettibone. Alf lost the Republican convention to Pettibone, despite having been the favorite to win the nomination. The turmoil inside the Republican Party allowed Robert Love Taylor to emerge as the Democratic candidate for Congress. It should have surprised no one that many of Alf’s supporters opted to back Bob Taylor for Congress rather than Pettibone. Taylor eked out a narrow victory and remains the last Democrat elected to Congress from the First District.

Bob Taylor lost his reelection campaign in 1880 to Pettibone and was defeated again when he faced Pettibone for a third time in 1882. Taylor contented himself with launching a local newspaper devoted to his own point of view. With the election of Grover Cleveland as president, Bob Taylor was appointed the Federal pension agent in Knoxville.

In 1886 one of the more curious political situations in the history of Tennessee politics occurred when Volunteer State Republicans nominated Alfred A. Taylor for governor. The Democrats responded by offering their own nomination to Robert Love Taylor, brother of the Republican candidate. The campaign between the Taylor brothers would become known as the “War of the Roses”, as the supporters of Alf wore white roses in their lapels, while the supporters of Bob wore red roses. Bob himself had made the comment that he and Alf were roses, but he claimed the white rose for himself.

The Taylor brothers were quite close and campaigned together all across the state, entertaining thousands of people all along the way with oratory, fiddle playing and homespun wit. As they traveled the state, the two brothers oftentimes shared the same bed. Having campaigned together, the brothers were thoroughly familiar with one another’s speeches and the mischievous Bob once flabbergasted Alf by giving his brother’s speech first.

Tennesseans flocked to see and hear the Taylor brothers and estimates of the audiences ranged as high as 25,000 in some of Tennessee’s larger cities. Bob Taylor edged out his brother Alf by just over 16,000 votes to win the governorship.

As governor, Bob Taylor was highly criticized by opponents for granting far too many pardons. Governor Taylor had requested the legislature create a facility for errant juveniles, a request the General Assembly ignored. Oblivious to the criticism about his using his pardoning power all too casually, Governor Taylor pardoned almost any juvenile offender who sought a pardon as a result of the legislature’s refusal to create a juvenile facility.

When Governor Taylor sought reelection in 1888, he was opposed by the more conservative Democrats, but was easily renominated. Governor Taylor won the general election almost as easily.

With his personal finances in shambles, Bob Taylor decided not to seek a third two-year term as governor in 1890. Instead, frantic to find a way to get himself out of debt, he asked his brother Alf what he should do. Alf invited Bob’s family to move into his house and suggested Bob go on a lecture tour. It was the start of a very lucrative enterprise for Bob Taylor, whose lecture, “The Fiddle and the Bow”, was a huge success. When Alf left Congress, he joined Bob on the lecture circuit and they presented a program called “Yankee Doodle and Dixie” which netted the brothers huge profits.

Bob Taylor was sought out by leaders of Tennessee’s Democratic Party in 1896 who begged him to run for governor again. Taylor didn’t much like the idea, nor did the incumbent, Peter Turney. Taylor finally agreed to run and narrowly beat back the Republican opposition, albeit only narrowly.

Bob Taylor did not run for yet another term as governor in 1898, but instead returned to the lecture circuit, where he remained enormously popular. Taylor did, however, covet a seat in the United States Senate and was frequently a candidate for that office. Although still highly popular with the people of Tennessee, Bob Taylor found it more difficult to be elected to the U. S. Senate as the General Assembly was responsible for electing senators at the time. When Senator William B. Bate died and the legislature promptly elected Governor James B. Frazier to succeed him, both Bob Taylor and former Governor Benton McMillin were outraged. McMillin and Taylor had desperately wanted to serve in the Senate and Taylor concluded he would be a candidate against Senator Edward W. Carmack in 1906. Carmack had quietly supported the effort to elect Governor Frazier to the Senate and Taylor entered a nonbinding preferential primary against Senator Carmack and won the popular vote. The legislature followed the will of the people and Robert Love Taylor finally attained his goal of serving in the United States Senate.

Bob Taylor was quite happy to have finally reached his goal of serving in the United States Senate, but politics in Tennessee soon caused Democrats to urge him to leave his Senate seat. Governor Malcolm Patterson had been running for a third two-year term in 1910, but finally withdrew as a candidate after it became readily apparent he could not be elected again. Tennessee Democrats were facing strong Republican opposition and the split in the Democratic Party had led to a “fusionist” movement that frightened many Democrats. Taylor did not want to leave the Senate, but seemed unable to resist the importunings of his fellow Democrats. He very reluctantly agreed to run for governor again, but to the surprise of almost everybody, lost the general election to Republican Ben W. Hooper of Newport.

It was a stinging rebuke to Tennessee Democrats and many of Bob Taylor’s friends believed Taylor never recovered from the blow of having been rejected by the people of Tennessee. Taylor still held onto his Senate seat despite having lost the gubernatorial election, yet he fretted over the loss of a campaign he never wished to wage in the first place. Taylor had been the most likely candidate to unite Democrats for the election, but the bitterness of so many Democrats following the assassination of Edward Ward Carmack and Governor Patterson’s actions following Carmack’s murder was impossible to overcome.

Bob Taylor had, for the most part, a very happy personal life. He and his first wife, Sarah, had five children together and Bob Taylor was cherished and adored by his children. Following the death of Sarah Taylor, Bob remarried to one Alice Hill and apparently they did not get along and the marriage ended in divorce. Love managed to find a willing Bob Taylor yet again when he married for the third time in 1904 to Mamie St. John.

Senator Taylor fell ill in March of 1912 and was suffering from gallstones. He went to a Washington hospital where he underwent an operation that was apparently highly unsuccessful. Whether it was the surgery or an infection that killed Bob Taylor remains unknown, but the old warhorse died on March 31, 1912, shocking the people of Tennessee, as he was only sixty-one years old.

Senator Taylor’s body was taken home to Tennessee by a special train and he lay in state in Nashville before being borne to Knoxville prior to his burial. At that time, the funeral of Robert Love Taylor was the biggest in the history of Knoxville, with much of East Tennessee turning out to bid “Our Bob” good bye. An estimated 40,000 citizens and dignitaries followed the body of Bob Taylor to Old Gray Cemetery.

Bob’s brother Alf finally managed to get himself elected governor in 1920 at age seventy-two. Robert Love Taylor’s remains were moved by the family in 1938 to lie beside his brother Alf in 1938. Today they sleep side by side.