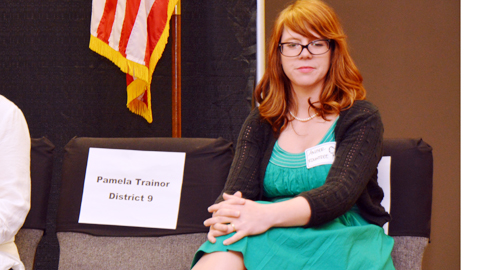 Amber Rountree, candidate for 9th District School Board, listens to a question during the forum. Photo by Dan Andrews.

There were two obvious things that came out of the school board candidate forum segment of the Concerned Citizens’ Candidate Town Hall meeting Thursday: None of the candidates present support Superintendent James McIntyre’s agenda for the schools and NONE of the incumbent Board of Education (BOE) members showed up.

The Knoxville Focus-sponsored event drew hundreds of people, candidates for all public offices, their supporters, lots of media, but no current school board members. Absent was BOE Chairperson Lynne Fugate of the 4th District, Gloria Deathridge of the 1st District, and Pamela Trainor of the 9th District.  Other candidates who were no-shows included Robert Boyd, District 1 and Sandra Rowcliffe, District 6.

Each candidate had chairs marked with their names on the stage and those five chairs remained notably empty while their challengers used the forum to present their views.

The “Town Hall” type forum allowed citizens to ask the school board candidates questions, one of which was aimed squarely at the embattled superintendent:  “Do you support McIntyre’s leadership?”

All of the candidates answered that they do not support McIntyre, with Buchanan commenting, “He’s not listening.” Absher said that McIntyre “leads the school board but not the schools.”

Another citizen asked if the candidates favor a middle school for the Gibbs-Corryton area. Hill replied, “absolutely, they need a school.” Bounds said she has a “great concern for Gibbs.” Rountree said that if the funds were there, “I’d like to support that.”

In a discussion on the superintendent’s contract being renewed, most candidates said they would have voted “NO” with calls  for an elected superintendent.

There was a question about whether, if elected, the candidates would journey to Nashville to work on new legislation to elect the superintendent, which led some of the candidates to question how much it would take to terminate McIntyre.

Buchanan said that a payout of a million dollars would be troublesome. “We need to treat him like the employee he is. Over time we’d make him uncomfortable and he’d move on,” Buchanan added.

Shepherd said the superintendent’s contract needs to be renegotiated. Walker said that initially McIntyre and the current school board had negotiated a five-year contract, which, Walker said, was illegal in that only four-year agreements are permitted under state law.

Rountree said that by extending McIntyre’s contract, the school board committed “almost a million dollars that we don’t have.”

The candidates also talked about the current testing in classrooms under McIntyre’s administration. Bounds and Rountree both called for stopping the testing of K-3 students, which is not required under state law. Clark called for stopping Common Core in the class rooms.  Shepherd called on stopping any testing immediately that is not mandated by the state.

When asked about McIntyre’s pay if he should leave, Rountree called for a forensic audit of the school budget. Bounds agreed, as did Hill.