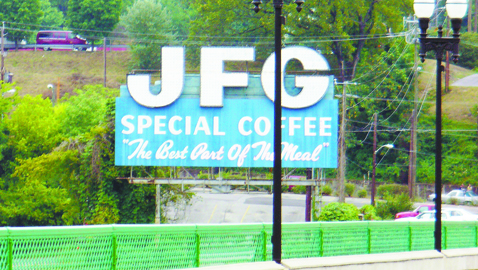 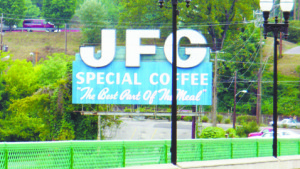 The famous JFG sign, as seen from the Gay Street Bridge in 2007. The sign will soon return and be placed at the Kerbela Temple, which is a short distance behind its previous location. Photo By Razz Sutton.

Knoxville’s 25th annual Boomsday will have a distinct South Knoxville flare this year.

As part of this year’s festivities South Knoxvillians and the entire city will celebrate the long-awaited return of the iconic JFG sign.

The JFG sign is more than 50 years old, and advertises the JFG coffee brand which began in 1882.

The sign was taken down and sent to Charlotte, NC for refurbishing and repair in 2010. Its fate remained somewhat uncertain for a period of time when the lease on its previous location (near Holston Gases, Inc.) was not renewed. However, thanks to a strategic partnership brokered by Vice Mayor Nick Pavlis between Reily Foods, Kerbela Temple,  and Visit Knoxville, the famed sign will once again light up the skyline in grand fashion.

“Its been a long, and tedious process,” Pavlis told The Focus, “but I couldn’t be more thrilled to see the sign restored to its rightful home here in South Knoxville.”

The sign will now reside at the Kerbela Temple, located at 315 Mimosa Avenue, near the Gay Street Bridge. However, its reinstatement was not accomplished without considerable resolve on  behalf of the South Knoxville community and its leaders.

In addition to finding a new location for the sign, relocating the sign required clearance from the Historic Zoning Commission, the Metropolitan Planning Commission, and city council. City council approved the measure in April of last year. The sign’s restoration and relocation was also supported and encouraged by Knox Heritage.

A homecoming such as this insists on a fair amount of pomp and circumstance, and that it will have as part of one of the largest fireworks displays in the country.

“As part of this year’s Boomsday celebration, the JFG sign will officially be re-lit in its new location, and I can’t think of a more fitting event than this one,” Pavlis added.

Knoxville’s premier Labor Day celebration will be held on September 2nd and generally draws a crowd of 400,000 or more to Knoxville’s riverfront.