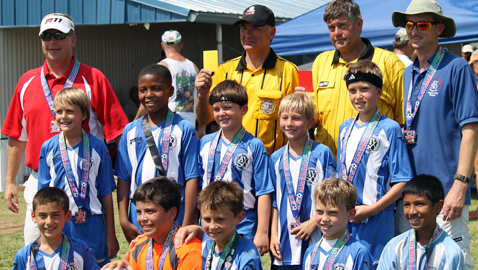 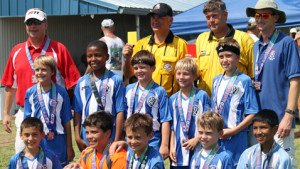 There’s no question the young boy would have had an excused absence. His dad had died just four days before the American Youth Soccer Organization’s National Games were to start in Knoxville.

But Logan Ewing, goal keeper for the Knoxville Force in the under-10 age division, chose to play. His father, Leonard Rudy Ewing, had a massive heart attack and passed away on the Sunday night prior to the tournament.

“He told his mom he still wanted to play,” said his coach, Wade Duke. “And he played amazing. He was our MVP without question.

“He played brilliantly with a heavy heart.”

Donna Ewing, when hearing of her son’s wishes to play, felt it would be “good therapy” for her 9-year-old son, said Duke.

Logan’s teammates honored him after the tourney.

“He was presented the game ball that included signatures of all the players on the team,” said Coach Duke. “This was their way of expressing how much they loved and cared for Logan, and how much they would be thinking of him.”

The ball also was signed by the team’s coaches and tournament director Dianne Stratton.

The Knoxville Force played six games in the tournament, winning one and tying one.

“Our team had only been together for two months. Two of the teams we played against were from Hawaii and San Antonio. I was very proud of our team’s play.”

The Knoxville Force, a member of Region 275, also received the Sportsmanship Award in the U-10 division.

“The boys were a class act all week,” said Duke. “They never complained even though it was real hot.”

One incident, said Duke, that brought attention to his team occurred in a game when an opposing team had multiple injuries and had to continue a player short.

“When that happened we took one of our players out of the game to make it even,” said Duke. “The referee came to me and said he really appreciated what we did.”

A lot of factors are weighed in selecting the Sportsmanship Award recipient.

“It’s how the coaches act, the parents act and the players act to the referee and other players,” said Duke. “It’s a combination of doing the right thing in every situation.”

Another Knox County team from Region 275 in the Ball Camp area, the under-16 boys team coached by Greg Hirtz, also was received the Sportsmanship Award in its division.

Five venues were used to play the games.

“I thought it was very successful,” added Stewart. “Everyone was very pleased and had a good time. The heat was the only problem, but it was hot in a lot of areas across the country.

“We had a full staff of medical people on hand and a doctor at each venue.”

Championship games were reduced from 90 minutes to 60 minutes in length because of the heat and the closing ceremonies were canceled.

The 2014 Games in Torrance, Calif., will mark the 50th anniversary of AYSO.