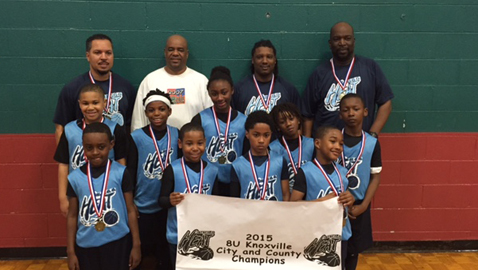 Maurice Clark had a girl on his undefeated East Knoxville Athletic Association 8-under basketball team this season who he says warrants keeping tabs on. Warlick, Tennessee’s coach, might want to make a note of that.

Iryana Muckle was the only female on the Heat, which held off Powell 25-22 to win the City-County championship March 11.

The division Clark’s team played in was actually “coed,” but all other members of his team and the opposing team were boys.

Muckle, a fourth grader at Green Magnet, turned 9 years old after Sept. 1, which allowed her to play in the 8U age division, Clark said.

Iryana scored four points in the game, but her two baskets inside to open the second half gave EKAA its biggest lead (17-8).

“This is her fifth year playing with me,” said Clark. “Iryana is tall for her age. She’s held her own against the boys all season.

“She’s special. You remember that name in years to come. She has a good chance to play Division1 ball someday, hopefully for the University of Tennessee. She loves UT.”

Clark said Muckle has already joined an AAU all-girls team to play on.

“She’ll be improving her game over the summer,” he said.

She is one of five members on this year’s Heat team who will move up to the 10-under division next season. Five members are young enough to play again in 8U, but Clark said he might bring the young players up to keep the team together.

Three players, including his son, Maurice Jr., have been together for five years. Another three have been on the team the past four seasons, and a couple others the past three years, said Clark. Only one player was on the team this season for the first time.

“We have good chemistry, and keeping the kids together helps us play better,” said Clark.

The Heat coach said “keeping composure” was a key in the win over Powell, which erased the 9-point deficit. A 10-footer by Cooper Roberts with 2:44 remaining pulled Powell into a 19-all tie.

Clark answered with four straight points for the Heat, hitting two free throws and then a shot from the top of the key.

Trailing by only one in the final minute, Powell got a defensive rebound but committed a traveling violation in back court. A short jumper by Quincy Pannell with 10 seconds to go put the Heat up by three and clinched the win.

“They did a great job of coming back,” said Clark, who said he tried to divide minutes among his players as equally as he could, instead of leaving his best players in the game.

EKAA’s press was effective down the stretch.

“Our press was awesome,” said Clark. “That’s normally when we take the game over from most teams.”

In addition to Roberts’ game-high 11 points, Powell got five points from Ethan Witaker and four from Bradyn Lewis.