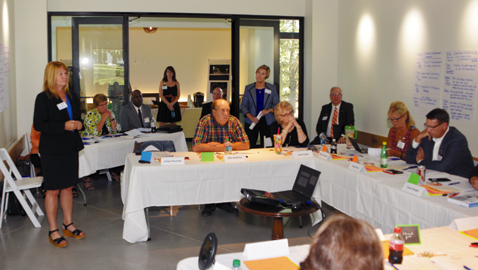 Photo by Dan Andrews.
The Knox County Board of Education had a work session/retreat on Friday, Sept. 18 at the Knoxville Botanical Gardens Welcome Center located at 2817 Boyds Bridge Pike.

An ambitious agenda for the four hour retreat included a review of District 2014-2015 accomplishments, an overview of the Studer Group “Straight A Leadership Assessment Results Report” for Knox County Schools, a session on Board Best Practices, and School Board Strengths, Weaknesses, Opportunities, and Threats (SWOT).

Board members listed many District accomplishments for the past year, including achievement of “Exemplary” status, approval of the IB program for Bearden Middle School, opening of the new CTE Magnet, a slight rise in ACT scores, coming out of a tough budget session with a small raise for teachers and two new middle schools, approval of the PECCA agreement with KCEA, more Community Schools, more public input on issues including balanced calendar and assessments, and increased financial accountability.

One of the accomplishments mentioned by Board member Lynne Fugate was the extraordinary amount of college scholarship money awarded to KCS graduates, citing in particular Bearden High School – which is interesting in lieu of the recent news that Bearden was labeled a Level 1 (“failing”) school for 2014-15. Maybe someday the BOE will address the absurdity of using “value added scores” to evaluate schools and teachers.

Nick Pavlis, Vice Mayor and Director of Government Relations for Charter’s TN/LA operations and Rick Johnson, President and CEO of the Governor’s Foundation for Health and Wellness led the discussion on Board Best Practices.

Harris’ agenda became clear as both Pavlis and Johnson addressed “micromanagement,” a term he has used recently in addressing BOE members wishing to have more oversight in non-renewal of teachers or firing of athletic coaches.

Pavlis said the first question Board Chair Doug Harris asked him to address was “How do I hold the Chief Executive accountable?” He said “I never thought I had to do that. Through four administrations (from Victor Ashe to Madeline Rogero) I never felt I had to hold them accountable…the tax payers do that, the people that they are representing…”

But there is a difference – the mayor is elected, and the Director of Schools is appointed. The tax payers and citizens have no voice other than their BOE representative to hold the superintendent accountable.

In the SWOT exercise, BOE members addressed their perceptions of the Board’s Strengths, Weaknesses, and Opportunities (there wasn’t time to address the “threats” part of the SWOT exercise).

The three top strengths included the diversity of the board (background, current career, etc.); their commitment to serving on the Board, and caring about kids (although only four people listed that as a strength).

The top three weaknesses included a lack of trust; different priorities and communication issues; and understanding of their role and working together as a team.

The over-arching opportunity identified was to work on trust, relationships (with each other and with their one employee, Dr. McIntyre) and communication. The remainder of the retreat was spent discussing how they might accomplish that.

Because of the Sunshine law, it is difficult for board members to meet and develop relationships apart from public meetings. Members agreed that developing relationships was going to have to be intentional and deliberate.

Fugate suggested scheduling a monthly lunch or dinner meal together. Karen Carson suggested board members could take turns choosing a monthly volunteer charity activity, such as Second Harvest, while Amber Rountree saw more value in working together to promote public education with Board participation in the upcoming “Run for the Schools” or “Leaders are Readers” program.

For all the talk of building trust and working together, it is still clear that this is a board divided. The will of the people was heard last year, electing three new BOE members who campaigned on a commitment to ask questions and not simply be a “rubber stamp.”

Patti Bounds, who had been quiet for most of the meeting, spoke up saying she was the “elephant in the room,” feeling that many of the comments that afternoon had been directed toward her.

She recounted the frustration she and fellow new BOE members Rountree and Terry Hill felt last year when they sunshined a social lunch meeting after a bible study only to have Dr. Alvez show up to take notes, and the relationship she, as a grandmother, has built with Rountree, a new mom. “I feel like there is a little jealousy built around that, it gets back to the “us versus them.”

And referring to the response she received from some board members after attending staff meetings or a recent leadership team retreat, she said, “My goal is to learn as much as I can about this system. Some people might call it micromanaging. That’s not how I see it… Each meeting I attended, I came away with a better idea of how Dr. McIntyre related to his employees. That is part of his evaluation that I am required to do.”

Rountree said, “the other elephant in the room is that I don’t think Dr. McIntyre has an equal working relationship with all Board members…While some may feel comfortable calling the superintendent and getting the information they need right away, others may be met with resistance.”

In the end, Harris commended Bounds, saying “You’ve done a phenomenal job getting information – I’ve learned a lot from some of the stuff you’ve asked for…” But he still had problems with Board members attending staff meetings, saying it “creates chaos.”

The board didn’t go so far as to resurrect the infamous “Superintendent Side Agreement” they tossed out a year ago, but they discussed possibly creating a new document to spell out board expectations.