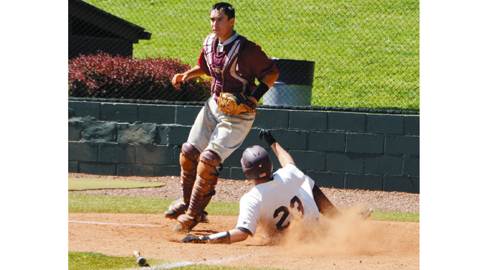 Photo by Dan Andrews.
Bearden’s Paul Underwood slides home past Oak Ridge catcher Chris Romannowski for the first run in the Bulldogs’ 10-0 victory over the Wildcats Thursday afternoon at Farragut.

“It’s always fun to play in this game,” Rice said after his Bulldogs notched a 10-0 five-inning win over Oak Ridge Thursday afternoon at Farragut’s John Heatherly Field. “It’s fun to hear the crack of the [wooden] bat. It’s awesome and Farragut does a great job and the teams that come here do it right.”

Thursday was a day to turn back the clock as both the Bulldogs and the Wildcats wore vintage uniforms and used wooden bats.

Both teams had some offensive struggles early.

“Unfortunately, there wasn’t many cracks of the bat,” Rice said.

The Bulldogs took a 1-0 lead in the top of the first without the benefit of a base hit. Bearden’s Bryson Ford walked to lead off the game. He stole second before advancing to third on a wild pitch.

He came home when Oak Ridge pitcher Ben Aird uncorked another wild pitch. Aird would go on to strike out the side. But he labored in the first as he walked three hitters and threw four wild pitches in the frame.

The Wildcats had a threat in the bottom of the inning as Jemiah Hall legged out an infield single and advanced to second on a sacrifice bunt by Logan Williams.Hall was stranded in scoring position as Bearden’s Sean Walsh retired the next two batters.

The Bulldogs added a run in the second despite being held hitless again in the frame. In that inning, Paul Underwood drew a one-out walk. He took second on Aird’s fifth wild pitch of the game. Underwood moved to third on a passed ball and scored when Kyle Porritt lifted a sacrifice fly to left field to make the score 2-0.

The Bulldogs extended their advantage to 3-0 in the third when an RBI double by Brandon Trammell plated Brock Vaughn, who drew a walk off of Williams, who took the mound in the top of the second.

The Wildcats opened the bottom of the third with three consecutive singles but Walsh averted damage thanks to some shoddy base running by Oak Ridge and a strikeout. Walsh got out of the inning when he induced a groundout by Seth Caldwell.

Bearden blew things open with four runs in the fourth. Porritt’s RBI double made it 4-0 before Brady Duncan had a three-run double to make it 7-0.

Bearden scored three more runs in the fifth on another RBI double by Porritt and a two-run double by Brock Vaughn.

“It’s a great day to be a Bulldog,” Rice said. “Sean did a great job and we took advantage of some things they gave us and then we got some big hits.”

Walsh went four innings. He gave up four hits and struck out four before Underwood threw a scoreless fifth.