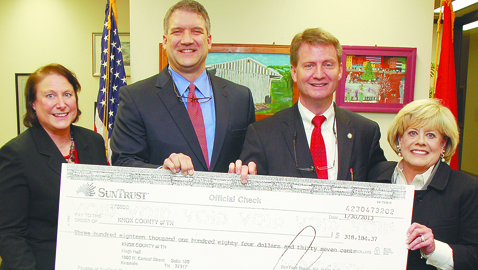 By Tasha Mahurin
mahurint@knoxfocus.com
While on the campaign trail in 2010, candidate for Knox County Mayor, Tim Burchett vowed to end the purchasing-card system for county departments under his control. Shortly after taking office, he did.
“Shortly after I took office we reduced the overall number of (purchasing) P-cards by 53 percent,” Burchett confirmed.
The decision initially began as an effort to restore transparency and curb spending- particularly in light of the confirmed abuse of the of p-card system by county employees during the Mike Ragsdale administration. In addition to implementing security measures to regulate spending and introducing a database through which county expenditures could be monitored by the public, a shift was made to an E-commerce card program.
The decision paid dividends last week when Suntrust Bank City President Grant Boyd, First Vice-President Mona Parsons and Vice-President Card Program Officer Kathy Morris presented Mayor Burchett, with a $318,000 E-commerce card rebate check.
“Even with this reduction (in P-cards) we’ve received more than a half a million dollars in rebates over the past two years and seen millions in cost-avoidance savings thanks to more efficient use of the e-commerce card program.”
The mayor also credits Knox County Purchasing Director, Hugh Holt; Knox County E-Commerce Card Administrator, Janice Orr; and Knox County Finance Director, Chris Caldwell for the program’s success.
The rebate program has been in place for some time; however, the Knox County Purchasing Department has been able to increase the rebate by streamlining purchasing procedures and consolidating purchasing programs into the E-commerce card program.
Last year, Knox County earned $318,000 in rebates from the use of its E-commerce cards. The County budgeted $200,000 for the rebate and surpassed that goal by nearly $120,000.
The additional funds will likely be used to pay down county debt.