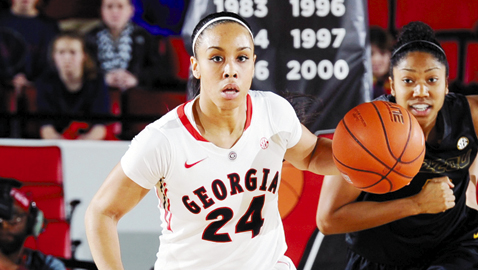 Marjorie Butler didn’t come away with a win, but she made her former high school coach proud.

The Webb School product, who is now the starting point guard for the University of Georgia, played from start to finish in the Lady Bulldogs’ 59-51 loss to Tennessee Sunday, Jan. 25, at Thompson-Boling Arena.

In her 40 minutes, Butler, a 5-8 junior, had a team-high six assists, tied for a team-high five rebounds and scored six points on 3-of-6 shooting. She also had three steals and committed only two turnovers.

“I thought Marjorie was very solid against Tennessee,” said Georgia Coach Andy Landers. “As a team, we had a little slippage with our press offense, which put her in precarious situations and often times she made the best of those.

“I thought her takes to the basket were critical and came at times when we really needed points. Throughout the season, Marjorie has improved and she continues to do so.”

The Lady Vols came into the game ranked No. 5 in the nation, while Georgia was No. 22.

“I got the chance to see Marjorie when they played the Lady Vols,” stated Webb Coach Shelley Collier via e-mail. “I was very impressed how poised she was on the court and how well she led her team. She handled the pressure and was under control for 40 minutes. Playing 40 minutes in college at that level is very tough to do.

“She led her team extremely well! I was very proud of her and very happy for her, knowing all that she has been through. I know she was disappointed that they lost.

“I got the chance to speak with her and hug her neck after the game,” added Collier. “Four of my seniors were there with me. Katie (Collier), Molly (Melton), Dasia (Maxwell) and Day (Vance), as well as my eighth grade daughter Casey, got the chance to see her, too. She was very happy that we came to see her.”

At least twice Butler gave her team the lead in the second half. Her steal and basket put Georgia ahead 31-30, erasing Tennessee’s 30-25 halftime lead. Her assist pass to Pachis Roberts, who hit a jumper from the right wing, put the Lady Bulldogs in front 45-44.

“We put them on the free throw line too many times and they shot the ball extremely well there, so I think that was really the difference in the game.”

Tennessee, in fact, made its first 20 attempts from the free throw line and finished 20 of 21 at the foul line. Georgia was 3 for 7 at the line.

“It was nice to have people there supporting me,” added Butler, “but in the back of my mind I know I’ve always got my family and friends supporting me, whether they’re there in person or there in spirit. It was more about focusing on the game and trying to get the win.”

Coach Collier noted Butler suffered a season-ending knee injury on Nov. 25, her birthday, in her senior season at Webb, and experienced additional problem with the knee when she got to Georgia.

“Her knee had not healed right from the surgery and she actually had to go through surgery again,” pointed out Collier. “She still experiences a lot of knee pain, but has learned how to manage the pain.

“On top of that, she also had a shoulder injury that she had to recover from while at Georgia. Once again, she handled the adversity to overcome the shoulder injury and has worked her way into a starting position.”

Butler suffered the dislocated shoulder in practice two days prior to the season opener of her sophomore season.

Butler has started all 21 games this season and is averaging 29.9 minutes per game, which leads the team. Her outside shooting percentage has dropped off some, but she has improved at the free throw line (79.6 percent) and bettered her assist/turnover ratio (84/51).

The daughter of Danny and Anne Butler, Marjorie was Miss Tennessee Basketball for Division II-A as a junior at Webb in 2011.