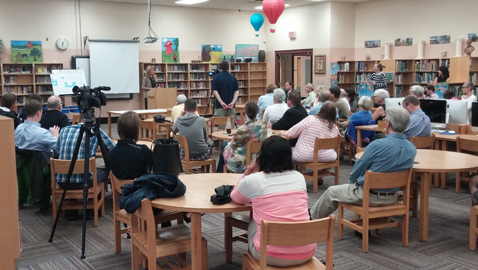 After years of sitting abandoned the fate of Old South High School looks brighter. Thursday the city held a public input session on the future of the old school and dozens of citizens, many former South High School students, attended the meeting at Dogwood Elementary and offered several suggestions.

Becky Wade, Community Development Director, hosted the meeting and detailed the sad history of the old school that has been deteriorating since 2008. The 953 E. Moody Avenue property was bought by the city for about $190,000 from an owner who bought it earlier but never did anything with the facility.

The city put about $30,000 into the school to stabilize the building but the facility still has structural problems, especially in the roof.

“We did a negotiated sell and bought it in April,” Wade said, adding, “Our plan is the city doesn’t want to continue to own it.” She said that the city will issue a request for proposal in a few months and then review offers from private businesses and would look at preserving the exterior of the building.

Several citizens made suggestions for possible future use including development by a private company for family or dorm style housing, workforce housing for younger workers, condos, a home for the homeless, or a combination retail and housing complex.

Wade said the suggestions will be included for consideration by a review committee which she said would include a citizen or city council member.

She also said the city may include a financial incentive to a buyer. She mentioned that the city doesn’t want it to become an arts center or something that would not contribute revenue to the city.

Kim Trent of Knox Heritage said an effort is underway to get Old South High School on the National Register of Historic Places. Wade said that the city is working to have the school, currently in an R-1 Residential Zone, rezoned for future use.

Asked what the city might do if a buyer failed to restore the building, Wade said there would be a clause in the agreement and the city would take it back.

She said the process of seeking a new owner for the school would be a public process and involve community input and the city council.