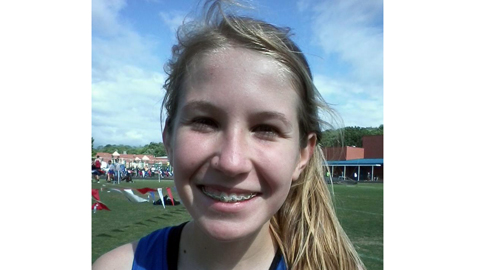 PHOTO BY STEVE WILLIAMS
Rebecca Story, CAK distance runner, will be one of many Knoxville athletes competing at the TSSAA Spring Fling in Murfreesboro this week.

Rebecca Story is not yet in high school, but she could be a high school state champion before the end of this week.

Story is an 8th grader at Christian Academy of Knoxville, and with the middle school she attends being on the same campus as CAK’s high school, she’s allowed, under Tennessee Secondary School Athletic Association rules, to compete on the Lady Warriors’ high school track team.

And compete she does.

The young and diminutive distance runner breezed to easy wins in the 1600 and 3200-meter runs and also anchored the Christian Academy girls’ 4×800 relay team to victory at the TSSAA Class A-AA East Sectional Thursday at CAK.

Rebecca knows the competition will be much stiffer at the state Thursday at Middle Tennessee State University in Murfreesboro.

“Mallory Young is really good, and a really nice person, too,” said Story, who ran against the Signal Mountain High junior in the TSSAA state cross country meet last November. Story was among the favorites in that race but came in sixth place. Young was third.

Despite her youth, Story meets her coach’s three requirements for an 8th grader to compete on the high school team.

“Rebecca has a great work ethic,” said Cosey. “You’re talking about somebody that’s getting it done in the classroom – a straight A student – and someone that has a tremendous amount of maturity. Those three factors are paramount, with academics being first.”

Story said she did a couple of triathlons – running, cycling and swimming – in the 4th grade and that led to her start in elementary school cross country in the 5th grade. She liked distance running and on into middle school. She’s still involved in swimming in the summer.

“A lot of coaches probably automatically assume that Rebecca is over-trained or doing high mileage,” said Cosey, who competed in the steeplechase in the 2000 Olympics after an outstanding track career at UT and Central High. “The reality is I’ve actually kept her mileage quite low. She’s still got some growing to do, and the last thing I want to do is hinder her long term development.

“The sky is the limit for her. She’s reaching the goals she has set each year. Before too long she’s going to have to put down on paper some goals that I don’t think she was thinking about maybe two years ago. But I think she’s having a lot of fun, and that’s what is important right now as an 8th grader.”

Story’s goals for the outdoor state meet this week?

“I’m really just going for the win. I’d rather win than get a good time, but I really want both. It’s really exciting being on the high school team. I’ve learned a lot this year from it.”

Story almost caught Hardin Valley Academy senior standout Emma Mashburn at the wire in the 1600 at this year’s KIL meet. She did complete a strong comeback to win the KIL 800.

“We’ve been working on her kick quite a bit this year,” said Cosey. “The third year, that’s when I usually start working on their finishing speed. She’s obviously coming around. She’s proven that – not just at KIL – but also at the Vol Track Classic, winning there as well. She’s got a great future.”