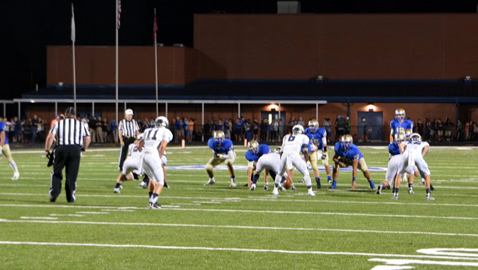 It was a game featuring teams with different offensive styles.

And in the end, it was CAK taking a few things out of the Grace Christian playbook.

The first quarter went according to script.  The Warriors tried to move the football through the air while the Rams did their best work on the ground.  However, there were no points to be found.

The Rams second possession carried over to the second quarter, and they faced a 4th and 3 from the CAK 13.  The handoff to Cameron Kuerschen went nowhere as Bo Layton and Jake Newton made the stop at the line of scrimmage.

It appeared that CAK (3-2) was going to take the lead on their ensuing possession.  They moved to the Grace Christian 37 yard line, and Warriors quarterback Cole Smith went for it all.  But the pass intended for Phillip Nichols was picked off by Rams defensive back Kobe Kelley at the one yard line.

Grace Christian (4-2) went nowhere on their first two plays and decided to try the rarely seen “quick kick,” punting on third down.  But CAK was prepared for it, and Blake Shuler smartly called a fair catch at the 18 yard line.

On the first play from scrimmage, the Warriors then opened the scoring.  Running back Cole Welch took the handoff, bounced to open space on the right side of the field and then dove to the pylon to the touchdown.

The visiting Rams responded very well on their next possession, driving down the field before facing a second down at the CAK 14. Jimmy Clevenger threw a quick pass to Kelley, who made one move, then beat the Warriors defense to the corner.  With 3:36 to go in the half, the game was tied at 7.

The points kept on coming as CAK took possession once again.  Smith found Austin Pope in the middle of the field, and the catch and run was worth 40 yards to the Grace 30. A personal foul call moved the football to the 15. Two plays later, Welch ran it into the end zone from 6 yards away.

In the third quarter CAK thought they’d have their third touchdown as Nichols, one of the best players on the field on this night, brought a punt back 57 yards for the score. However, an illegal block took the points off the scoreboard.

But the Warriors shook that off, drove 66 yards down the field and would get that touchdown as Austin Pope took the snap himself, ran over the left side, and scored from two yards away.  The ensuing two point conversion was good, and with 4:13 to go in the third quarter CAK was on top 21-7, and that would complete the scoring on the evening.

CAK will have this week off before returning to action on October 10th at Belfry (KY) High School.  Grace Christian will host Meigs County on Friday night.