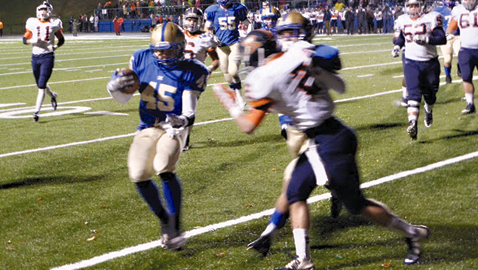 On a cold, rainy Halloween night at Christian Academy, the Warriors treated their home crowd to a 42-20 victory over the Kingston Yellow Jackets. In a rarity for the pass-oriented Warriors, CAK scored more rushing touchdowns than passing touchdowns on the night, finishing with four touchdowns on the ground. Michael Thompson and Cole Welch paced the Warrior rushing attack as Thompson carried 11 times for 57 yards and two touchdowns while Welch carried six times for 52 yards and one touchdown. Even receiver Austin Pope got into the rushing touchdown smorgasbord.

The CAK defense set the tone for the game right from the start as they recovered a Paul Bolden snap on the Yellow Jackets’ first play from scrimmage. One play later, Thompson scored his first touchdown of the game from 9 yards out as the Warriors capitalized on the Kingston turnover for the early 7-0 lead.

“That was huge on the first play,” CAK Head Coach Rusty Bradley said. “We had deferred the coin toss. I wanted to get our defense out on the field early and set the tone and they did that, and I was really pleased.”

The Warriors feasted on Kingston again like they were Halloween candy, getting a second straight turnover on a Bolden interception. CAK again capitalized as quarterback Cole Smith threw an 18-yard touchdown pass to Austin Pope for a 14-0 lead.

Just before halftime, the Warriors converted a 13-play, five minute drive with Pope’s second touchdown, a one-yard run for a 21-0 lead.

The Warriors picked up where they left off in the second half. They went on a 7-play drive that took 2 minutes and 15 seconds. Thompson ended the drive with his second touchdown run of the game, an 8-yard score. CAK led 28-0.

“The run game was really important for us tonight,” Thompson said. “All the blockers and everything, we just played our game,” he added.

Kingston finally got on the scoreboard with a 50-yard touchdown run from Rhett Jones to cut it to 28-7 with 8:48 left.

The momentum, however, was short lived. CAK took the ball from its own 19-yard line all the way down the field, scoring a touchdown on a third-and-goal. Baylor Caughorn got loose in the left corner of the end zone, and Smith rifled the ball to him for the 9-yard touchdown.

Leading 35-7, the Warriors got the ball back on another Bolden interception, his second of the game. The Warriors began the fourth quarter at their own 6-yard line after the turnover. Three straight CAK penalties temporarily derailed the drive, but the Warrior offense got back on track with a 34-yard Philip Nichols catch. Three plays later, Cole Welch ran for a 22-yard touchdown run to put CAK up 42-7.         The Warriors, so accustomed to throwing for many more touchdowns than they rush for, had four rushing touchdowns on the night to two rushing touchdowns.

“Being able to run the football and not being so predictable was huge for us,” CAK Head Coach Rusty Bradley said.

Kingston would tack on two late touchdowns. Bolden ran for a 90-yard touchdown with 6:13 left, then Maurice Lane scored on a 3-yard touchdown run with 49 seconds left to make the final score, 42-20 CAK.

CAK finished the regular season at 5-5, 2-2 in District 3AA and advances to the state playoffs. CAK will most likely have to play on the road Friday night at 7 p.m. in its first round playoff game. The playoff schedule was not available at press time. Kingston finished the season at 3-7, 0-4 in District 3AA.

“We really wanted to make a stand and go into the playoffs on a win,” Smith said, “and we no doubt came out here ready to play defense and offense.”