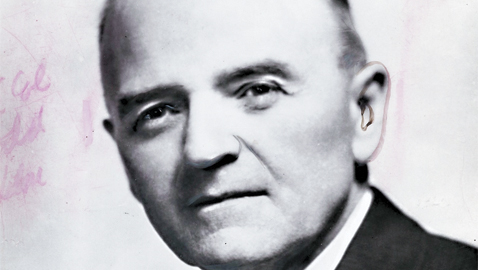 Prentice Cooper had been governor of Tennessee for six years; the first man to be elected to three two-year terms since Austin Peay.  Unlike Peay, Cooper lived through his entire tenure of office, but in 1944, he could not run again.  Governor Cooper was a relatively young man and had wanted to run for the United States Senate in 1942 against Senator Tom Stewart, but Tennessee’s senior United States senator, Kenneth D. McKellar, did not look with favor upon the idea.  Cooper resigned himself to seeking a third term and the Democratic primary had been closer than the governor might have wished.  Governor Cooper faced former congressman J. Ridley Mitchell in the primary.  Mitchell had given up his seat in Congress to run for the Senate in 1938 unsuccessfully.  Mitchell was an able politician and had made a race of it.

Senator McKellar and E. H. Crump, leader of the Shelby County political organization, had dominated Tennessee politics since 1932 and neither man proposed to surrender that control.  Both men pondered the gubernatorial race in 1944.

The first candidate to officially announce for the Democratic nomination for governor was Edward Ward Carmack, Jr., son of the late senator of the same name.  The elder Carmack had been an iconic and polarizing figure in Tennessee politics, but the son was a pale imitation of his father.  “Ned” Carmack had run for the United States Senate in 1942 against Tom Stewart and had quite nearly won.  E. H. Crump had been appalled when Senator Stewart had lost the rest of the state, but was renominated by the huge vote for him in Shelby County.

Carmack’s showing encouraged him to declare he would run for governor in 1944.

James B. Frazier, Jr., another scion of a politically successful father, had qualified to seek the Democratic nomination for governor.  Frazier’s father had been both a governor and U. S. senator from Tennessee and he was presently the U. S. Attorney for the Eastern Division of Tennessee, a federal appointment he received through Senator K. D. McKellar.

Robert L. Taylor, a Johnson City attorney and the son of Republican governor Alf A. Taylor, considered a gubernatorial bid.  Taylor was the law partner of Judge Thad Cox, who was especially close to Senator McKellar.  Both Frazier and Taylor were allied with the McKellar organization, but most of the speculation centered on Fifth District Congressman Jim McCord of Lewisburg.

McCord had long been popular in his native Marshall County and had run for Congress in 1942 when the Fifth District had been redrawn due to redistricting.  McCord was so popular, he was unopposed in the Democratic primary and general elections.

Congressman McCord at first seemed to be a rather reluctant candidate, dismissing the idea he might run for governor with the support of both Senator McKellar and E. H. Crump.  McCord was by profession a businessman, farmer, and auctioneer.  The Congressman was also an excellent speaker and in his brief term in the U. S. House of Representatives, he frequently traveled outside the state to speak to various groups.  McCord ventured to Chicago in December of 1943 to address the national convention of the Milk Producer’s Association.  The highlight of the evening was McCord auctioning off a prize Jersey bull.  Later that same month, Congressman McCord was due to speak at the University of Georgia in Athens.

McCord’s friends in Marshall County submitted nominating petitions allowing the Congressman to qualify for the Democratic gubernatorial nomination in March of 1944.  The Congressman also distanced himself from Senator McKellar by announcing he would not vote for the McKellar amendments to legislation affecting the Tennessee Valley Authority.

“Senator McKellar and I are friends of many years,” McCord said.  “I appreciate his record of distinguished service but with genuine regret I differ with him on the TVA amendments.”

By that time, McCord was the only announced candidate running for governor on the Democratic ticket, outside of the perennial candidate Dr. John R. Neal and another nuisance candidate.  E. W. Carmack had withdrawn and the candidacies of James B. Frazier, Jr. and Robert L. Taylor had never materialized when neither could secure the support of Senator McKellar and E. H. Crump.  Congressman McCord had already been endorsed by both Senator McKellar and the Memphis Boss.

Carmack had been desperately trying to get into one of the armed services since his failed Senate race in 1942.  Ned Carmack had been a constant presence in Senator McKellar’s Washington office and McKellar had done his best to help Carmack, but to no avail.  Carmack had been dropping hints he would run for governor should he be unable to get into the armed services and it was likely a tactic on his part to spur Senator McKellar to greater efforts.  McKellar was utterly exasperated with Carmack who began considering a run for a seat on the Tennessee Public Utilities Commission.

With Ned Carmack’s withdrawal from the gubernatorial race, Jim McCord was largely unopposed.

Tennessee Republicans actually had a primary contest between John Wesley Kilgo and H. C. Lowry, a Knoxville attorney.  Kilgo was also an attorney and resident of Greeneville.  Kilgo had been elected to the Tennessee General Assembly and ran an active campaign for the GOP nomination, pledging if he were the nominee, he would carry the Republican fight “into every county in the state.”

Congressman McCord had the luxury of conducting a leisurely campaign throughout the primary election.  He easily won the nomination, carrying every county in Tennessee.

John W. Kilgo won the Republican nomination and true to his word, tried to make a race of it.

Kilgo was highly critical of the Cooper administration and pledged, if elected, he would ask the General Assembly to repeal the poll tax.  Kilgo also denounced the “one-party system” in Tennessee, which he said was detrimental to the Volunteer State’s future progress.  Representative Kilgo also promised to support a retirement plan for teachers, health insurance for school children, and to build a four-lane highway from East to West Tennessee.

Jim McCord formally opened his fall campaign in Cookeville and was joined by Fourth District Congressman Albert Gore in promoting the Democratic ticket.  The platform at the Cookeville rally groaned under the weight of just about every important Democrat in the state of Tennessee.  Senator McKellar, Senator Stewart, Governor Prentice Cooper, Congressman Estes Kefauver, Congressman Wirt Courtney, Congressman Percy Priest, Congressman Cliff Davis, Congressman Jere Cooper, and Congressman Tom Murray all sat on the platform as Gore and McCord made their pitch.

Jim Nance McCord campaigned in West Tennessee with Senator Tom Stewart, speaking in Jackson.  McCord predicted both the national and state tickets would sweep Tennessee.  Stewart introduced McCord to the audience who promptly admitted, “It is now evident that the next administration will face some of the most complex problems that have ever been presented in this state’s history.”

McCord went on to assure his audience, “We face those problems with a calm confidence and we accept the challenge of every yesterday of our history, of every tomorrow of our future with an honesty of purpose that has brought us far and that will sustain us through the grueling experiences ahead.

“If I am elected governor – – – and I will be  – – – I accept the responsibility of the position along with its honors.”

McCord was excellent at using generalities to lift the spirits of his audiences, but saying little of substance.

The Republicans ran more than a nominal campaign for the first time in years.  Ohio Governor John W. Bricker, the GOP vice presidential nominee, made a stop in Nashville to speak on behalf of the national ticket, as well as John W. Kilgo.  William H. Willis, the Republican governor of Vermont, was also on hand to try and rally the GOP faithful, although the number of Republicans in Davidson County was miniscule.

Crump’s Memphis machine took nothing for granted and organized down to the precinct level.  Business, labor, and public officials came together to support the Democratic ticket and some 50 vice chairmen were named to turn out the vote.  Senator McKellar was chosen as the “honorary chairman” of the Shelby County “Roosevelt-Truman-McCord-Hammer Club”.  Mayor Walter Chandler served as chairman of the club and Congressman Clifford Davis was named secretary.  Crump was merely one of the 50 vice chairmen, but the Memphis Boss assured reporters, the campaign would reach every nook and cranny inside Shelby County.

Both gubernatorial candidates were campaigning hard by the last week of October.  McCord made stops in Knoxville, Kingston, Rockwood, Harriman Wartburg, Oneida, and Lafollette, all in one day.  Over the course of the next two days, McCord visited fourteen more cities in East Tennessee before spending an entire day in Knoxville.  McCord’s schedule was far more hectic than that of John W. Kilgo, who made visits to three cities in Middle Tennessee before returning to East Tennessee to visit Chattanooga, Dunlap and Jasper.

Kilgo made another appeal for a “two-party” state in Centerville, following a tour of Crump’s domain of Memphis.  Kilgo maintained there would be better services provided to Tennesseans if the Volunteer State would truly become a two party state.  Kilgo called for the “elimination of boss rule” and promised that he could pare the cost of government in Tennessee by at least 25% within the first six months of his administration, if elected governor.

Kilgo accepted an invitation from the Bristol league of Women Voters for a debate between the two candidates, an invitation Congressman McCord ignored.

The Republican candidate faced a small fracas when Maxey Jarman, the state campaign manager for the Republican ticket, had to deny charges he was personally supporting McCord for governor.  Kilgo graciously replied, “I entertain no doubts as to your choice in the gubernatorial race.”

Kilgo reluctantly admitted his was an uphill race and readily confessed he faced a challenge “to dissipate the idea in the minds of some that the Republican campaign for governor was to be merely a perfunctory effort.”

John W. Kilgo fired a blast at McCord, charging several of the Democratic candidate’s county campaign managers were also state employees.  Kilgo complained the practice “violate the very spirit of civil service.”  The Republican candidate stated he believed Tennessee needed a “Hatch Act of its own”.  He pledged, if elected governor, he would not “set up a spoils system in Tennessee.”

Kilgo closed his campaign with a speech in Kingsport, accompanied by First District Congressman B. Carroll Reece.  Reece introduced Kilgo, who spoke to a large crowd at the Civic Auditorium.

Congressman McCord closed his own campaign in his native Lewisburg and both awaited the election results.

McCord had been completely confident throughout the campaign and he had every reason to be.  Despite the spirited campaign conducted by John Wesley Kilgo, Jim Nance McCord won an overwhelming victory, rolling up 275,746 votes to Kilgo’s 158,742 votes.  McCord won 62.5% of the vote, with Kilgo winning almost 36% of the vote.

Jim McCord would go on to serve four years as governor of Tennessee.  John W. Kilgo would live a very long life, dying in 1980 at age ninety-three.  Kilgo would make another race in 1946, seeking to replace Carroll Reece in Congress.  Kilgo ran second and returned to his law practice.