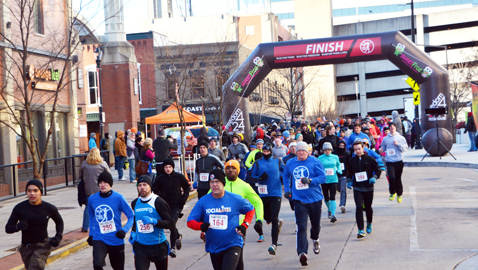 Pam Cantrell received a call from a higher power approximately two years ago and it was a call she felt compelled to answer.

So her company, Cantrell’s Heating & Air became a sponsor for the annual Run 4 Their Lives 5K run and 1-Mile Walk in 2014.

The second annual Run 4 Their Lives Knoxville event was held Saturday. The run began on Market Square and traveled through Knoxville’s Historic Fourth and Gill Neighborhood. The event raises awareness and funds to bring sexually exploited women and children into freedom. It’s part of the Freedom 4/24 Project to combat human trafficking nationwide and is part of a Firewall Ministries, the Community Coalition Against Human Trafficking and StreetGrace TN.

“This was just something that God placed on my heart out of nowhere and I talked to other people who said the same thing,” Cantrell said. “This is one of those things that nobody wants to think about or talk about.

“But it’s a big problem and it’s a $32 billion industry and not an expendable industry like drugs.”

Human trafficking is a worldwide problem in poor countries as victims are abducted or sold into slavery by parents. While human trafficking is thought to exist mainly in poor Third World countries, Cantrell said that it is also quite common in the United States and in Tennessee.

“It’s not just in the poorer countries,” Cantrell said. It’s also in the United States and it’s in our back yard here in Tennessee.

“There are documented cases of human trafficking in every county in Tennessee. After God placed this on my heart, I began attending weekly prayer meetings at various churches and I found out more and more about it.”

What Cantrell discovered was disturbing. The average victim is 12 years old. Many victims are even younger than that.

“They sell kids and the kids are abducted and told that if they don’t cooperate, that their families will be killed,” she said. “This is a hard topic to talk or know about but it needs to be fought against.”

Cantrell also noted that Saturday’s bitterly cold temperatures didn’t keep participants away from the second running of the event.

“I don’t have the numbers but I know that it was a success,” she said.

The Run 4 Their Lives began in Knoxville last year and had more than 800 participants on a cold and rainy day in 2014.

The inaugural event was also successful.

“We got 800 people at the first race and that was really big,” Cantrell recalled.