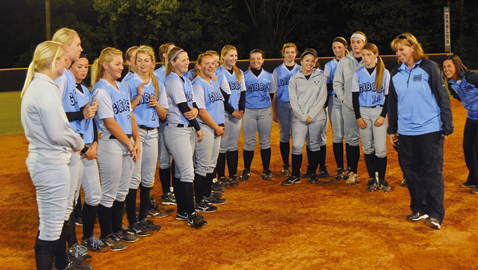 Just the latest special game for the softball powerhouse and its coach.

“I just think about all the girls who’ve come through the program, who’ve added their mark each year, have put their stamp on the program each year,” said Mitchell during the post-game celebration. “Without them there are no wins.

“We get out here and work hard everyday. It hasn’t changed from 1994 to now. The work ethic. The tradition. Trying to uphold the tradition. And the fight and the desire in the players.”

Just seconds after Veda Jones flew out to left fielder Holly Moyers to end the game, the Gibbs public address announcer asked fans to direct their attention to the infield for a special presentation. Senior players presented Coach Mitchell with a plaque commemorating the milestone victory.

Clever press box workers used the spaces for runs and inning on the scoreboard to put up 700. That made a nice backdrop, as the numbers lit up brightly after the night game. Fireworks also sounded nearby.

The Lady Eagles know how to celebrate. They’ve had a lot of practice over the years.

Mitchell has coached Gibbs to four Class AA state crowns and in 2012 was selected as Coach of the Year for the Southeast Region of the United States.

Gibbs’ softball program started in 1981. Mitchell, then Carol Zachary, started playing for the Lady Eagles in 1983 when she was an eighth grader, and pitched Gibbs to four state titles before going on to have a great collegiate career at Carson-Newman.

She took over as Gibbs’ head coach in 1994 after one season as an assistant under her high school coach, Dennis Ray.

Gibbs is playing its first season in Class AAA and the win over Clinton gave the Lady Eagles a 40-4 record. Three of their losses have come against county rival Halls.

Clinton Coach Alicia Phillips, who played at UT, has known of Mitchell for a long time.

“When I played summer ball when I was younger, I played with all the Gibbs girls,” recalled Phillips. “I went to Clinton and everybody else went to Gibbs High and played for Carol. She’s always been a great coach. They’re always fundamentally sound.

“This is definitely an awesome accomplishment. I hate it that it was against us, but she’s a great coach. She’s pretty well known in the state of Tennessee for girls softball.”

“She deserves it,” said Trent. “She’s a good coach and she really works us hard. She really motivates us to want to win. We don’t want to mess up the legacy.

“It’s just great to be a part of it, such a big time in her life. And now we’re a part of the 700 club with her. It just makes the season that much better, that much more worth it and that all the hard work has paid off.”

Trent tripled into the right field corner to drive in Faith Lowery and spark a three-run third inning that gave Gibbs a 4-1 lead over the Lady Dragons. Lexie Needham also had a RBI triple and Cheyenne Boles chipped in a RBI double in the big inning.

Sophomore catcher Sarah McFarland doubled to lead off the fourth and scored on Lowry’s sacrifice fly.

Sophomore Abby Hicks pitched the first five innings to get the win. She gave up a run in the first but then retired 13 straight batters before Rachel Farmer, also a sophomore, pitched the final two innings.