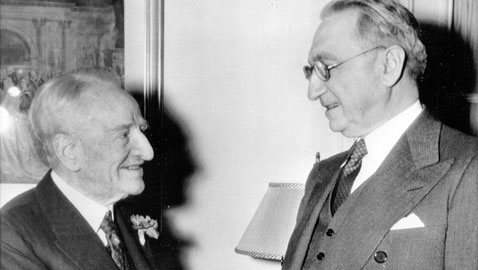 Carter Glass was born on January 4, 1858 and when the Civil War broke out, Glass’s newspaper publisher father enlisted on the side of the Confederacy, although the elder Glass had worked hard to prevent Virginia from seceding from the Union.  Robert Glass had the good fortune to live through the Civil War, but quite nearly twenty of Carter Glass’s relatives on the maternal side of his family did not.

Virginia was left prostrate after the Civil War and the formal education of Carter Glass came to an end at an early age, although he would retain a life-long interest in reading and possessed a remarkable intellectual curiosity.  Glass was already working full-time at age thirteen for his father as a printer’s assistant.  At nineteen, Carter Glass managed to find employment as a clerk for the Atlantic, Mississippi and Ohio Railroad.  Glass left the railroad when he finally had the opportunity to work as a reporter for the Lynchburg News.  By 1887, Glass was the editor of the paper.  One year later, the publisher decided to retire and gave Glass the chance to buy the newspaper.  Carter Glass managed to borrow $100 for the down payment, making him the owner and publisher of his own newspaper.

Glass made a success of his paper; in fact, he soon bought out the other local newspapers in Lynchburg, making his Lynchburg News the only newspaper in town.

Carter Glass was somewhat obsessed on the subject of finances, having seen what Virginia’s crushing debt had done to the state.  His career in elective politics started in 1899 when he was elected to the Virginia State Senate.  Glass was also a delegate to Virginia’s Constitutional Convention, where he became one of the leading voices to establish a poll tax, as well as literacy tests.

When Congressman Peter Otey died in office in May of 1902, Carter Glass was elected to fill the vacancy.  Glass was regularly reelected by his constituents and by 1913, he was Chairman of the House Banking and Currency Committee.  With Senator Robert Owen of Oklahoma, Glass introduced and passed the Glass-Owen Act, which created the Federal Reserve System for the United States.

When Secretary of the Treasury William Gibbs McAdoo resigned in 1918, President Woodrow Wilson appointed Glass as his successor.  Glass remained in Wilson’s Cabinet until 1920 when Virginia’s senior U. S. Senator Thomas Martin died.  Glass was appointed to the United States Senate and remained there for the rest of his long life.

In 1923, Glass built an imposing mansion in Lynchburg called “Montview,” where he raised prized Jersey cows.  Glass also owned another impressive home in Washington, D. C. in the fashionable DuPont Circle area of the nation’s Capitol.

With the election of Franklin Delano Roosevelt, the Democrats returned to power and Roosevelt offered Glass his old post as Secretary of the Treasury again.  Glass had his doubts about Roosevelt’s fiscal policy and turned down the offer, preferring to remain in the Senate.  FDR then offered Virginia’s other Senator Claude A. Swanson a place in his Cabinet as Secretary of the Navy, an offer which was accepted.  Swanson’s acceptance of a position in the Roosevelt Cabinet averted what was to have been an epic primary battle between Senator Swanson, a wily politician, and former Governor Harry Flood Byrd.  Swanson’s resignation allowed Byrd to win a seat in the Senate and the Byrd Organization dominated Virginia’s politics for decades.  In fact, Byrd himself only left the Senate in 1965 and was succeeded by his son, Harry F. Byrd, Jr. who remained in office until 1983.

Although Harry Byrd’s machine ruled Virginia, Carter Glass had no political problems in his native state as he had by that time become something of an icon.  Both Senators Glass and Byrd shared many of the same political views and both soon became opponents of Franklin Roosevelt’s New Deal.  When the Democrats resumed control of the Senate in 1933, seniority elevated Glass to the Chairmanship of the Senate Appropriations Committee.

Glass did manage to remain productive during the first years of the New Deal, sponsoring with Alabama Congressman Henry B. Steagall the Glass – Steagall Act in 1933.  America was still then in the icy grip of the Great Depression and thousands of banks had failed and many depositors had literally lost everything they had; the Glass – Steagall Act created the Federal Deposit Insurance Corporation, which would afford depositors some protection in the future.

The 5’4 Carter Glass remained as scrappy as ever, loudly denouncing the New Deal program in the Senate.  When FDR was reelected in 1936 in a landslide, carrying every state but Vermont and Maine, Glass, referring to the huge public expenditures by the New Deal, wryly observed, “It is well nigh impossible to beat a five billion dollar campaign fund.”

Senator Glass, a fierce proponent of states’ rights, was outraged by President Roosevelt’s plan to enlarge the U. S. Supreme Court.  Glass made an extraordinary radio address condemning FDR’s proposal.  Privately, Glass was morose about the prospects of defeating Roosevelt’s court packing plan.  “I don’t imagine for a minute it’ll do any good,” Glass said, adding, “If the President asked Congress to commit suicide tomorrow they’d do it.”

Glass had opposed the Roosevelt administration time and again, voting against the Social Security legislation, as well as the Agriculture Adjustment Act and the National Industrial Recovery Act.  Glass registered his opposition to the repeal of prohibition and the Reciprocal Trade Act.

When FDR sought an unprecedented third term in 1940, Carter Glass was bitterly opposed to the idea.  The ailing Glass actually appeared at the Democratic National Convention and placed in nomination the name of James A. Farley, FDR’s Postmaster General.  Farley, a Catholic who had dreams of succeeding FDR or perhaps becoming the vice presidential nominee on a ticket with Tennessee’s Cordell Hull, was a curious choice to receive Glass’s support. However. FDR was easily renominated.

One of the few New Deal projects Carter Glass did support was the Tennessee Valley Authority.  The ranking member of the Senate Appropriations Committee was Tennessee’s Senator Kenneth McKellar.  Glass and McKellar were good friends and as Glass’s health deteriorated, his absences from the Senate were increasingly prolonged, leaving McKellar to do much of the Appropriations Committee work.

In 1937, Glass’s wife Augusta died and a daughter of the same name followed not long thereafter.  Senator Glass did find some personal happiness when he remarried in 1940 to Mary Scott.  The eighty-two year old Virginian and his second wife were constant companions and there was some question as to precisely how much the new Mrs. Glass managed to influence the senator.  Glass had sold the mansion on DuPont Circle and he and Mrs. Glass lived in an apartment at Washington’s luxurious Mayflower Hotel.

Despite his age and serious health problems, Glass was a candidate for reelection in 1942 and Virginia sent him back to the Senate at age eighty-four.  The fact Virginia would reelect him at that time is all the more remarkable as Glass had stopped attending sessions of the Senate that same year.  The Senate allowed Carter Glass to take the oath of office at his Lynchburg, Virginia home, which he did while wearing his slippers.  He was never to appear on the Senate floor again.

Periodically there would be press releases and pronouncements from the Glass Senate office or through Mrs. Glass, but whether they were instigated at the request of Senator Glass is unknown.  Glass remained inside his Mayflower Hotel apartment and occasionally there were muted questions about his ability to continue to serve in the Senate.  Like Mrs. Woodrow Wilson following President Wilson’s stroke in 1919, Mrs. Carter Glass became the gatekeeper to her husband’s inner sanctum and few visitors were allowed to actually see the senator.

Finally a professor at a women’s college wrote a column suggesting it was time for Carter Glass to resign so that Virginia could have two working senators.  One Virginia newspaper printed the column and published an editorial on the subject stating, “It is plainly the duty of Mrs. Carter Glass to make it clear to her husband that his age and physical condition disbar him from further duty in the Senate and to prevail on him to tender his resignation…”

Other Virginia newspapers, including many that had staunchly supported Senator Glass over the years, announced they too believed the time had come for Glass to resign.  Senator Glass’s eldest son, Able Powell Glass, ran the Lynchburg paper and published the discussion about his father’s illness and the calls for resignation without making a single comment.

Glass not only refused to resign from the Senate, but also remained Chairman of the Appropriations Committee as well as President Pro Tempore.  Glass’s office finally announced he would not try to succeed himself as the Senate’s President Pro Tempore, a post which was then filled by Tennessee’s Senator K. D. McKellar.  McKellar was also Chairman of the Appropriations Committee in all but name.  Still, Mrs. Glass insisted Carter Glass would not resign.

When faced with the commentary from Virginia, Mrs. Glass snapped, “No comment!”

Allen Drury, then a young reporter for the Associated Press, wrote in his diary, “…from the guarded suite…through whose doors no outsider has passed in many months to see what lies within, has come the usual answer.  Mrs. Glass has replied for the Senator.  The suggestion will not be considered.”

Reports circulated that finally the matter of resigning from the Senate was broached with Senator Glass himself who allegedly replied with a firm, “No.”

Carter Glass remained in the United States Senate until his death on May 28, 1946 at age 88.  The Glass mansion in Lynchburg was eventually sold and is presently a museum on the grounds of the late Jerry Falwell’s Liberty University.