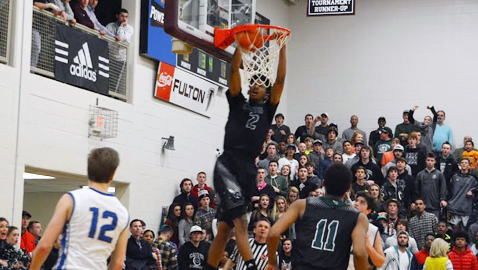 Photo by Dan Andrews.
Carter High School’s Kelvin Jackson dazzles the crowd with a slam dunk Friday. He led the Hornets to a 76-48 win over CAK in the region semifinals at Fulton.

The Hornets, who scored 100 or more points 11 times this season, slowed things down by design in their 76-48 victory over Christian Academy of Knoxville in the Region 2-AAA Tournament before a packed house at Fulton’s Jody Wright Arena.

Carter and the Warriors were locked in a tight game early and with the contest knotted 8-8, the Hornets closed the first quarter with an 11-2 run and the surge allowed them to open a 19-11 advantage by stanza’s end.

Carter (24-8) then inbounded the ball to start the second quarter and held the ball just past midcourt for more than four minutes.

“I was playing against a very good basketball team that is well-coached,” Carter coach Joby Boydstone said. “I wanted to protect that 8-point lead.

As it turned out, Boydstone’s strategy worked. Once the Hornets quit stalling, they didn’t miss a beat. They extended their lead to 34-19 by halftime and never looked back.

“This wasn’t about ego,” Boydstone said. “This was about getting a ‘W’ for these kids because they’ve worked so hard and they’ve put up with me all year.

“I’m proud of these kids. They deserve to have special things happen for them.”

Carter’s victory earned it a date with the host Falcons on Saturday (results were unavailable at press time) and a trip to Tuesday’s sectional round of the state playoffs. A victory Tuesday would clinch a State Tournament bid for the Hornets.

Carter had four players score in double figures. Kelvin Jackson led the way with a game-high 27 points. Jordan Bowden, who was saddled with early foul trouble, scored 16 of his 19 points after halftime. Austin Hayes, who buried four 3-pointers, finished with 14 points for Carter, which led 62-38 after three quarters. John Woodruff finished with 11 points.

Lucas Campbell led the Warriors, who finish the season with a 24-8 record, with 16 points and Hunter Reynolds had 14 for CAK, which won the District 4-AA Tournament Championship with a win over Catholic on Feb. 20

Fulton (25-3) notched a 71-65 comeback win over the Irish in Friday night’s other semifinal. The Falcons will also advance to Tuesday night’s Sectionals.