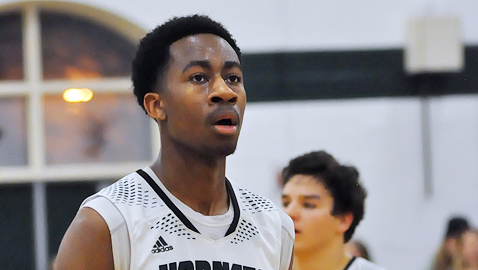 PHOTO BY MISTY LAWRENCE
Jordan Bowden, Carter standout, concentrates at the free throw line in the Class AA sectional game. Bowden scored 33 points to lead the Hornets past Greeneville and into this week’s state tournament.

The Runnin’ Hornets went one and done, losing to Greeneville 67-64.

It turned out Greeneville was Carter’s opponent in last week’s sectional game, with a berth in the 2015 state tourney on the line.

But second-year Carter coach Joby Boydstone wasn’t looking for revenge in the rematch. He was seeking something more significant.

“Going into this game, Coach said, ‘It’s not revenge, it’s a reckoning’,” recalled senior star Jordan Bowden after the game. “So we had to go in there and win, and play defense just like we play.”

Bowden admitted he wasn’t sure what his coach meant by “a reckoning.”. He just went out and played.

And play he did.

The 6-4 Bowden put on quite a show, scoring 33 points that included four dunks, to lead the Hornets past the Greene Devils 85-71 before a packed gym at Carter.

And Coach Boydstone got the results he had hoped. Validation that his team was state tourney worthy.

Carter (27-7) will shoot for state honors again this week at Middle Tennessee State University in Murfreesboro, starting with a Class AA quarterfinal game against the Haywood Tomcats (32-2) of Brownsville Thursday afternoon at 3:45 (EST).

The game was up tempo on both sides right from the start. After the Greene Devils took a 21-18 lead early in the second period, Carter had a 15-0 run and went into the dressing room at halftime on top 41-33.

Greeneville got as close as five (52-47), but Woodruff made three points the old fashion way and a deflection by Austin Hayes led to a Bowden stuff, quickly restoring a 10-point advantage.

Bowden ended the third quarter in dramatic fashion, flying to the hoop to cram in an offensive rebound, making it 59-48.

Greeneville threatened once more in the fourth, getting within seven points with 5:42 on the clock, but Bowden scored on a drive and Dutton sank both ends of a 1-and-1 to push the lead back to 11.

A 3-point shot by Hayes from the right wing and Woodruff’s football pass to Bowden plus one extended the command to 16 (75-59).

Recalling last season’s game, Bowden said Carter had the lead against Greeneville in the fourth quarter but got too “comfortable.” Then Greeneville made shots and Carter didn’t.

In that game, Carter went 0 for 11 from 3-point range and Greeneville overcame a seven-point deficit in the final 5 minutes, 25 seconds.

“When we get down there this year, if we’re up, we’ve just got to finish the game, play defense, just play like we’ve been playing,” said Bowden.

Added Woodruff: “We’ve got to play every game hard every minute. This game tonight was hard for us, even though we won by 14, and they’re going to be harder as we go on.

“We know how serious it gets at the state. We’ve got to bring our A game.”

Greeneville coach Brad Woolsey felt rebounding and Carter’s many second-chance opportunities was the difference in this year’s meeting.

“It’s tough (defending Carter),” he added. “You’ve got to pick your poison.”