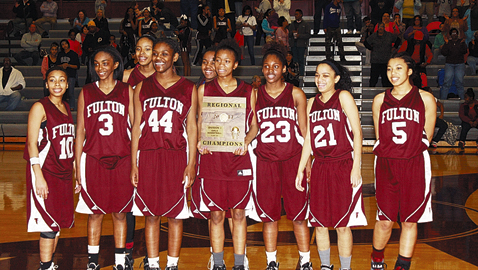 With a Top 10 state ranking, a District 3-AA title and the first region championship in school history, it’s been a royal season for the Fulton High School girls basketball team.

Why they even have a castle.

Make that senior Tyanna Castle, a clutch performer in the Lady Falcons’ 81-76 overtime win over Christian Academy of Knoxville in the Region 2-AA finals last Wednesday night at Alcoa.

Tyanna’s perfect free throw shooting twice pulled Fulton into a tie – the first time with 10.6 seconds left in regulation – and her rebound basket put the Lady Falcons ahead with 49 seconds to go in OT.

Castle capped her performance and prevented another CAK comeback by knocking down four of four foul shots in the final 27 seconds.

Tyanna admitted she was nervous when she stepped to the free throw line for the first time and the game on the line.

“I had to take a deep breath and just relax, remembering how I shoot free throws in practice,” said Castle, who finished with 18 points and was 8 for 8 at the charity stripe.

“At practice, that’s all we do – every time we do something hard – we go (shoot) free throws, because that’s how a game is. You go hard, you’re tired, and that’s when you need the free throws the most. So we practice on those a lot.”

“It was a team effort,” said McKinney, who was named tourney MVP. “Everyone had a part in this.”

Brianna Bryant (28) and Anna Hammaker (25) paced CAK. Taylor Dodson added 10. Inside starters Kaycee Heitzman and Kelsey Naler fouled out with the outcome undecided. In fact, Heitzman departed with 5:13 left in the fourth period.

Fulton (27-5) was to have hosted highly regarded Grainger in the State Sectionals this past Saturday night, while CAK (20-13) was to have traveled to Elizabethton. Winners of sectional games advance to the TSSAA State tournament, which starts Wednesday at MTSU in Murfreesboro.

“It feels like our hard work finally paid off, from everybody working hard in practice and pushing ourselves even when we are tired,” said Castle.

Fulton, with its quick man-to-man defense causing several turnovers, led 19-8 at the end of the first period. Coach John Fisher’s Lady Falcons increased the difference to 19 (32-13), but CAK scored the last six points of the first half and trailed 36-24.

The Lady Warriors kept shooting their way back into the game in the first three minutes of the second half, and back-to-back 3s by Hammaker and Heitzman had them within four (43-39).

A turnaround shot by Bryant gave the Lady Warriors their first lead (63-61) with 4:45 left in the fourth period.

Hammaker’s driving layup against McKinney put CAK ahead 69-67 with 20 seconds to go. Castle drew a foul by Naler and hit her first two clutch foul shots. In the final seconds of regulation, Hammaker drove into the lane against heavy pressure and couldn’t score.

A steal in backcourt by Fulton senior Brittani Whiteside and ensuing free throw cut the gap to 1. A rebound basket by Castle put the Lady Falcons ahead for good.

“We just didn’t start the way we need to,” said CAK Coach Steve Denny. “Credit the girls for coming back . . . (It) just didn’t go our way.”