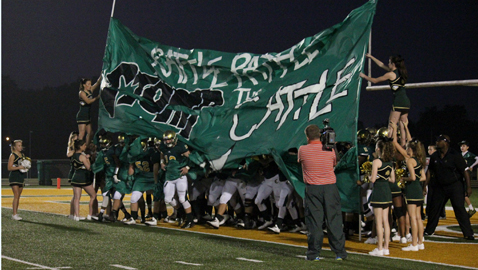 PHOTO BY RILEY CLEM
It’s a team effort as cheerleaders and football players get Catholic off to a rousing start Friday night. The banner the players begin to charge through reads, “Rattle Rattle Stomp the Cattle.” The end result was a 50-14 victory over Anderson County. With the win, the Fighting Irish remained unbeaten and avenged last season’s 60-41 loss to the Mavericks.

Talk about taking a bull by the horns.

The Irish dominated the non-district football showdown from start to finish, and from starters to reserves.

Catholic senior wide receiver Dominic Souder had a breakout performance on offense and a swarming Irish defense made its presence felt early and often.

Souder had a night to remember, with three touchdown catches and another nullified by a holding penalty. He also had a fumble recovery on defense.

“It was fun. I haven’t been used to that,” said Souder, who didn’t play on offense last season.

“Our coach (former NFL quarterback Steve Matthews) is really good at knowing what plays to run and at what time, and they were playing off of me, so it led to a couple of seam routes, a post, a little hitch. He just knows what to call at the right time.”

On the game’s third play from scrimmage, Souder took a pass from quarterback Zac Jancek in the flat and sped 62 yards down the sideline – right in front of a jubilant Catholic bench – to put the Irish on top. Senior Logan Lacey battled his way in for a 2-point conversion and it was quickly 8-0.

Anderson County lost a fumble on its first possession and then went three-and-out four straight times against the tough Irish defense.

“I think defensively, it was probably our best performance of the season,” said Matthews. “Offensively, there’s maybe still a few things we can clean up.”

Matthews said he was most impressed with his defense and its play against Anderson County’s Matt Fox, one of the state’s top ground gainers.

“We kind of expected a back-and-forth, high-scoring game, but our defense really did an outstanding job of stopping Fox,” said Matthews.

“Our three guys up front – Josh Silvey, Austin Rowan and Corey Ostrowski – really do a good job. They were getting after them early, there was a fumble and things started going our way.”

Catholic’s quick tempo attack increased the lead to 22-0 before the first quarter ended as sophomore Amari Rodgers scored twice, on a 31-yard catch-and-run and a 16-yard scamper. Alex Jones added the PAT kick each time.

Anderson County finally cashed in on an 80-yard pass play when Brandon Ford got behind the Irish secondary and hauled in Zane Smith’s long pass. Aiden Campbell’s kick made it 22-7 with 8:05 left in the half.

Catholic didn’t let the Mavs get any closer. Souder outbattled an AC defensive back for the ball and came down in the end zone just inside the sideline for his second TD grab, an 18-yarder.

Jordan Anderson’s 15-yard catch just off the ground got the Irish six more points and a 36-7 command 12.5 seconds before intermission.

Fox, who rushed for 49 yards in the first half, fumbled on his second carry at the beginning of the third quarter. Souder recovered.

Jancek threw for 279 yards and his fifth TD pass, a 34-yarder to Souder, put the mercy rule and running clock in effect with 9:58 showing in the third quarter. On the play, Souder escaped the grasp of a tackler and managed to keep his balance to score.

A Logan fumble recovery at the Catholic 31 halted an AC threat.

In the final quarter, Catholic reserve QB Cooper Edenfield broke loose up the middle and tallied on a 56-yard run. Garrett Johnson, AC’s backup quarterback, who filled in for an injured Smith in the second half, ran in from the 2 for the Mavericks’ final touchdown with only 33 seconds to go.

Fox ran for 142 yards in the second half, but much of that came against reserves. He rushed for 401 yards against the Irish last season.

“I think it was a statement win,” said Souder. “Most people were thinking AC would win. But we came out and played physical. We played assignment football. I think this game really put us on the map.”

AC Coach Davey Gillum said: “They whipped us on both sides of the ball. They’re a very good football team. It shouldn’t have been as bad as it was, but on top of them being good, we didn’t play real well.”