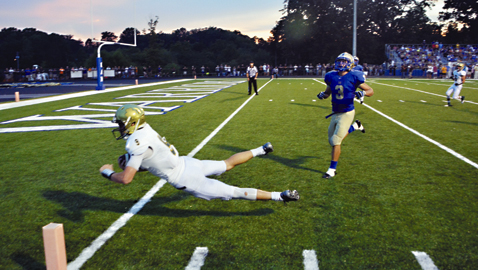 By Dan Andrews.
Catholic quarterback Zac Jancek avoids CAK defender Wyatt Eaton and plunges into the end zone. Jancek rushed for 95 yards and accounted for five touchdowns in the Irish’s 70-23 win over the Warriors in the District 4-AA opener for both teams.

A blitzkrieg happened at Christian Academy of Knoxville on Friday night. Only this time, it wasn’t the Warriors doing the blitzing on their home field, but the Catholic Fighting Irish. The Irish overcame a 17-7 early first quarter deficit, forced five turnovers, and held CAK scoreless in the second half, winning 70-23. Catholic would outscore CAK 63-6 from the middle of the second quarter till the end of the game and score 42 straight points.

Things did not get off to a smooth start for the Irish. Quarterback Zac Jancek threw an interception to the Warriors’ Blake Shuler early in the first quarter. CAK converted the turnover into a touchdown when quarterback Cole Smith found Austin Pope, who made a one-handed catch in the right corner of the end zone for a 10-0 lead.

“Coach called a fade. I acted like I was running a slant, I just went up and got it,” Pope said.

Catholic responded to the CAK touchdown. Despite fumbling a snap and losing 20 yards, the Irish converted a 4th-and-3. Three plays later, Logan Lacey scored the first Irish touchdown of the night, a 12-yard catch from Jancek, and the Irish cut the Warrior lead to 10-7.

The Warriors took back the momentum three plays later when running back Michael Thompson took a screen pass 74 yards for a touchdown, increasing CAK’s lead to 17-7 at the end of the first quarter.

Catholic responded and again scored quickly, with Jancek running 39 yards for a touchdown and cutting CAK’s lead to three with 11:29 left in the second quarter. The Fighting Irish were about to go on their offensive tear.

The Irish took the lead for good with 9:25 left in the second quarter on Chase Kuerschen’s 48-yard touchdown catch. Kuerschen took a short pass the distance to give the Irish a 21-17 lead.

Catholic’s feasting on CAK turnovers began on CAK’s ensuing possession. Thompson fumbled the ball, and the Irish recovered it. One play later, sophomore Amari Rodgers blazed past defenders for a 72-yard touchdown run, his first of three touchdowns on the night.

“They made that big hole. It was wide open,” Rodgers said of his touchdown.  “We just told each other not to quit,” Rodgers said after Catholic was down 10 points.

CAK briefly halted the Irish juggernaut with a 5-yard touchdown pass by Smith to Pope, but they missed the extra point and trailed 28-23.

Catholic shook off a block in the back that forced them into a 2nd and 18. Rodgers dazzled again, burning defenders for a 38-yard touchdown run and a 35-23 Irish lead.

The Warriors tried to get a score before halftime, but Augustus Fortune intercepted a Smith pass. Jancek would run for a 6-yard touchdown with 23 seconds left to make the score 42-23 Catholic. It was his second rushing touchdown to go with his two passing touchdowns in the first half.

“I had never rushed for that many touchdowns in my whole life,” Jancek said.

The second half was all Catholic. Rodgers picked off Smith on CAK’s first possession of the second half and returned the interception for a touchdown, his third of the game. CAK fumbled the ensuing kickoff, recording its fourth turnover. Jancek scampered for an 18-yard touchdown run, his third of the game, and Catholic had scored 14 straight points in a matter of minutes to break the game open and lead 56-23.

From there, CAK would have two straight three-and-outs on offense while Catholic’s Logan Lacey ran for a touchdown, and Matt Carson also ran for a touchdown after the Warriors’ fifth turnover. Carson’s touchdown with 2:44 left in the game made the final score 70-23 Catholic.

“This is what we’re capable of,” Matthews said. “It’s just putting drives together and not shooting ourselves in the foot.”