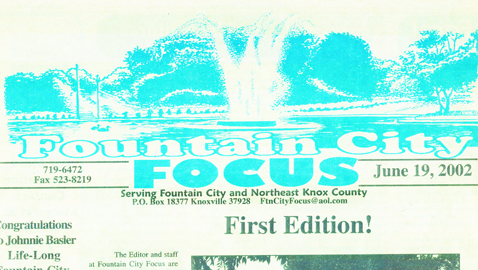 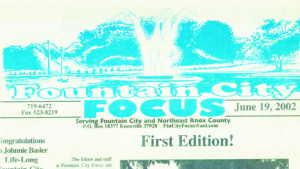 When I moved to Knoxville to start work at The Focus as a graphic designer in June 2005, The Fountain City Focus had just transitioned from a tabloid sized paper to a broadsheet larger than what you are holding now. The headlines were about the new Food City opening on North Broadway and a recap of the week’s Honor Fountain City Day. We had a whole six-page section on Real Estate and a single page for sports. We were only distributed in Northeast Knoxville and Knox County.

In the past year alone, we have launched a terrific new website, expanded our distribution, made headlines with our Focus Poll and have even been to Washington. Not bad for a community weekly in an age where the big dailies are suffering!

So much has changed in my seven years, not to mention the paper’s ten, for The Focus and none of it would have been possible if not for our loyal readers, faithful advertisers and all of my dedicated staff members, past and present. Thank you all.

I hope you enjoy this special edition and get a kick out of some of our columnists’ “throwback” headers.

How my Column came to be

As The Knoxville Focus celebrates its Tenth Anniversary, I thought I would relate just how my column came to be; I am frequently asked how my column originated.

Steve Hunley, publisher of The Knoxville Focus, and I had long been acquainted and it was not unusual for us to have wide-ranging conversations on many topics.  One evening Steve and I were talking and he recalled the legendary story about Tennessee Senator Kenneth D. McKellar visiting President Franklin D. Roosevelt to discuss a hidden appropriation, which became the genesis of Oak Ridge, “the Atomic City.”  After listening to the version Steve gave, I replied that I knew Senator McKellar’s last Administrative Assistant, W. R. Davidson and told him the version that Senator McKellar himself liked to repeat.  Upon hearing that particular version, Steve exclaimed his delight and said that he believed readers would enjoy hearing tales from the past and wondered if I would be interested in writing a weekly column.

I gave it some thought and over a few months, my present-day column evolved.  Steve gently hinted that the column would be better still were we to publish a picture with each column and how right he was!  I have long collected all sorts of memorabilia and Steve has invested considerable financial resources in finding some rare pictures to go with some of my columns.  It has been great fun to share some of that memorabilia with readers and in many instances; readers are seeing photographs that have not been viewed by human eyes for decades.

Over the past two years, there have been many changes in my columns and the number of people who read it has truly surprised me.  I enjoy receiving emails, which have come from all over the State of Tennessee and I have made some wonderful new friends because of my column.

Apparently many other publications have followed suit and readers have been the beneficiaries of some really interesting historical columns.  Relating our past has been a lot of fun for me personally and I have enjoyed every minute of writing my column.

I want to take this occasion to thank Steve Hunley for having the foresight to recognize such a column could be widely read and popular with a great many people, as well as Focus editor Marianne Dedmon for her unparalleled designed skills; most of all, I want to thank you, the readers of The Knoxville Focus for your generous comments and sharing your own stories.  I am very happy to join in the celebration of The Knoxville Focus’s Tenth Anniversary and hope the next ten years will be even better!

I hadn’t been writing that long when the desire to find a paper to publish my columns bit me like a mosquito. It was an itch I just couldn’t scratch. Like most writers, I struggled to find some publication that would give me, a novice, the chance to share my work with others, and like others, I shot off hundreds of letters to large papers and magazines, always hoping that a “yes” would come from one of them and that would set me up for fame and fortune.

Supposedly, a writer can’t begin to count on success until he or she has received enough rejection letters to paper an office. I was well on the way to redecorating my writing space when the most wonderful correspondence of my writing career arrived in the mailbox. It was from Charmin Foth, the editor of The Fountain City Focus. She’d taken the time to read the collection of columns that I’d submitted, something that doesn’t occur with most editors.

Charmin liked my writing style and topics enough that she decided to give me a chance to write one piece for each week’s edition. She quickly explained that it would be a trial run to see if the reading public liked my columns.

For the next several years, I flooded The Focus’ offices with columns, and each week, just as Charmin had promised, they appeared in the paper.  All the while, I worked on other projects and eventually landed pieces in Chicken Soup books and other magazines. Why, at one point I even picked up an assignment as a weekly columnist with the Knoxville News Sentinel’s Community section.

Still, nothing gave me as much joy as completing a personal column for The Focus and sharing it with readers. Over that time, I covered plenty of personal stories about family and friends; at other times, I voiced my righteous indignation over injustices that I saw. All the while, The Focus staff and the readers hung in there with me.

About three years ago, an opportunity to write for another paper for a salary came around, and after much soul-searching and praying, I took it. In doing so, I had to leave The Focus, and it came with much sadness and more than a few tears. It felt much like I was packing my bags and leaving home. Still, Steve Hunley told me it was okay and wished me well. He also left the door open should I ever choose to return to The Focus.

Life has a way of coming full-circle, and a few months ago, that paper and I parted ways as “cuts” in budgets led to cuts in staff. That news came in an email from the paper. After the shock and hurt wore off, I penned a letter to Focus editor Marianne Dedmon. I told her that I would like the opportunity to return to The Focus and once again be in contact with the readers who had been so loyal. She welcomed me to submit pieces but reminded me that the paper has a stable of columnists and that I would have to “take a number” to have my work published intermittently.

I’m glad to be HOME again. Sure, I enjoyed the experiences with other papers, and I learned plenty. However, being in touch with the place and folks who gave this East Tennessee native his first chance is comforting. I’m blessed with this association with the Focus and hope that it continues for years to come. Happy Tenth-Year Anniversary to The Knoxville Focus! You have the interests of your readership in mind, and for that, all of us will be loyal for years to come.