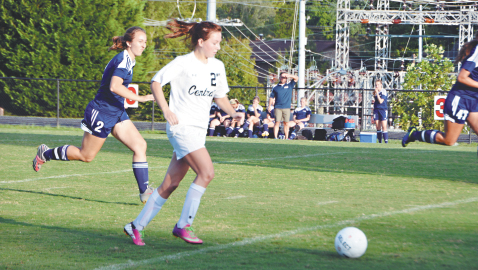 Photo by Dan Andrews.
Central High’s Bailey Maybrier races past William Blount defenders and goes on the attack in the Lady Bobcats’ 3-0 victory over the Lady Governors Tuesday night in Fountain City. Maybrier had a goal and an assist in the match at Dan Y. Boring Stadium.

Entering the 2014 season, Central High School girls soccer coach Bill Mize knew his team was facing a rebuilding campaign and injuries did not help the Lady Bobcats’ cause.

Recently, however, Central has won some games and gotten healthier. The young Lady Bobcats received a huge confidence boost when they nabbed a 3-0 victory over William Blount Tuesday night at Dan Y. Boring Stadium.

“We’ve got some girls back and we’re improving but we’ve got a long way to go,” Mize said. “We’ve had some surprises and we’re working hard to get better every week.”

The hard work paid off in a big way as the shutout win over the Lady Governors pushed the Lady Bobcats over the .500 mark for the 2014 season.

Central (6-5) caught a break in the 25th minute when William Blount scored an own goal when a Lady Governors defender put the ball in the back of her on net. The miscue came after William Blount (3-6) controlled the tempo early.

After wresting control of the match, Central went on to put up an impressive effort. The Lady Bobcats outshot the visitors 16-4 in the match and that left Lady Governors’ coach Jim Millsaps a bit frustrated.

“In all of the game we’ve lost, except for Hardin Valley, we waited until the last 20 minutes of the game to start playing,” Millsaps said. “Hardin Valley is probably the best team in [District 4-AAA]. Tonight, we [had some early success] but we got complacent.

“The girls were afraid of getting tired and everybody waited until the last 20 minutes to start playing and I’m stretched on depth.”

Central took a 2-0 lead when Bailey Maybrier scored with just over five minutes remaining until halftime.

The Lady Bobcats peppered William Blount goalkeeper Kori Risner with 11 shots in the first 40 minutes. Things could’ve been worse for the Lady Govs if not for Risner’s effort. Risner, one of 10 William Blount seniors, made nine first-half saves.

Central may have picked up a key win but Mize noted that Haley Worrick, another WBHS rookie, was a thorn in his squad’s side early.

“[Worrick] made us change what we were doing,” Mize said. “She’s a great player.”

Central closed the scoring in the 68th minute on a goal by junior Cailynn Meres. Baybrier picked up an assist on the match’s final marker. Lady Bobcats sophomore goalkeeper made four saves, including three in the opening half.