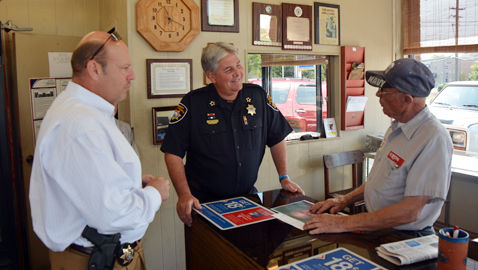 Photo by Dan Andrews.
Sheriff Jones and Deputy Chief Lee Tramel take a hands on approach involving protecting seniors year round. Jones and Tramel personally follow up with Alvin Frye in regards to an arrest made resulting from a burglary at his business.

By Dan Andrews and Mike Steely

Late one afternoon last week, the E-911 Center received a call from an elderly female asking for food. Dispatchers notified Knoxville Police Department Officers Jay Williams and Jonathan Book and advised they felt the woman was confused or distressed. Both officers responded to Harvey Street where they located the 78-year-old woman who welcomed them into her residence. The officers looked in her kitchen where the only food they were able to locate was a half-empty jar of peanut butter that she had been rationing since February 16. The woman told the officers that she waited so long to call for assistance because she did not want to be a burden to anyone and that she did not know who else to call.

The officers immediately went to a nearby grocery store and purchased the woman some groceries. The officers then went to Knoxville Area Rescue Ministries and, with their assistance, obtained a tray of hot food. The officers also made several calls in an effort to obtain future assistance for the woman.

This is an example of why it is so important to check on your neighbors, the elderly and family members, especially during severe weather events.

If you have a heart for the elderly and are looking to give back to your community then the Knox County Sheriff’s Office has an opportunity for you. It’s called SCAN, the Senior Citizens Awareness Network, and it’s a special program that uses carefully screened volunteers to help keep an eye on the county’s elderly and shut-in citizens.

The program was founded in 1997 by Deputy Chief Lee Tramel. Tramel told The Focus that he learned of such programs at a National Sheriff’s Association conference and decided to start a proactive program in Knox County for the elderly and shut-in population.

“There’s no question that SCAN has saved lives. Our volunteers went out to Karns and couldn’t find an address of an older lady. They didn’t give up and finally found her house away off the street. When they arrived they found the home on fire and pulled a person from the house that could not have gotten out without the SCAN volunteers,” Tramel said.

“We’ve got [SCAN volunteers] in marked cars and uniform but they’re not officers. The car and the uniforms give a neighborhood peace of mind,” he said.

“People see the uniformed people go up to the door. They know it’s the Sheriff’s Office and everything is OK,” Tramel said.

Sheriff J.J. Jones echoed Tramel’s remarks and spoke of the elderly, “For some of them it’s the only time they see someone.”

“There’s not a week goes by when I don’t get a letter from an elderly or a relative telling me how much they appreciate us going by,” Sheriff Jones said.

The department is looking for volunteers in April. Volunteers must be 21 years old or older and they are trained in providing home visitation, security surveys, crime prevention counseling, and community referrals. It’s a 40-hour course and volunteers must have a safe driving record and a clean criminal history.