10th ranked South-Doyle improves to 3-0 on the season 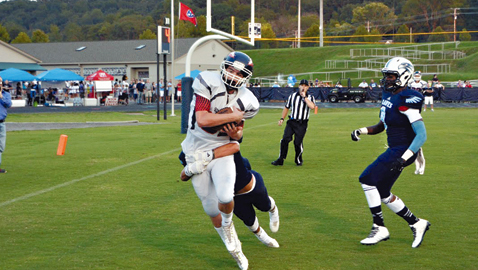 Photo by Dan Andrews,
South-Doyle’s Dylan Cameron (in white) hauls in a 16 yard touchdown pass from Brody Rollins to give the Cherokees an early 7-0 lead against Hardin Valley on Friday night. The 10th ranked Cherokees improved to 3-0 on the year with a 47-21 road win over the Hawks.

Radio Voice of South-Doyle football on AM 620 WRJZ

Respect.  That’s something that the South-Doyle Cherokee football team was looking for in a battle of 2-0 teams at Hardin Valley on Friday night.  And with a convincing 47-21 win over the class 6A Hawks, the Cherokees – ranked 10th in class 5A for the last 2 weeks – feel like they are beginning to earn some respect.

“Yeah, I think we proved that we are a pretty good football team tonight,” senior wide receiver and cornerback Shoan Lebeoux told The Focus after the game on the Cherokee Post Game Show on AM 620 WRJZ.  “We all just played like brothers out there tonight and beat a good football team in their house.”

Despite being ranked in class 5A in the first two Associated Press polls of the year, the Cherokees are one of those teams not garnering a lot of attention outside of South Knoxville and South Knoxville County just yet.  This win may help get the word out as the talented South-Doyle team overcame a significant size advantage held by Hardin Valley.

“We knew coming in that this would be the biggest and most physical team we had played yet this year,” South-Doyle head football coach and athletic director Clark Duncan said.  “I’m really proud of the way our guys worked this week, and the way they fought tonight.”

Coming off of a 3 interception game a week ago against Jefferson County, senior quarterback/safety Brody Rollins got things going again in this game with yet another pick.  His interception led to the first score of the game, a 16 yard pass from Rollins to fellow senior Dylan Cameron.  Logan Mathis’ point after gave the Cherokees a 7-0 lead at the 7:33 mark of the first period.

Hardin Valley evened the score early in the second quarter, however, as sophomore QB Gavin Greene found Isaac Aguero in the end zone on a 22 yard pass. Alan Grigsby’s kick knotted the score at 7 with 10:51 left in the half.

It didn’t take long for South-Doyle to regain the lead.  After a big kickoff return by Malik Lundy put the Cherokees in business, Lundy did the scoring honors himself on an 8 yard touchdown run up the gut.  Mathis added the extra point, and the Cherokees were up 14-7 just a minute and forty seconds after HVA had tied the game.

South Doyle then added to the lead on a Rollins run from 5 yards away, and after Mathis booted the extra point the Cherokee lead had been extended to 21-7 with just 3:35 left in the first half.

At that point it looked like the Cherokees had things in hand, but Hardin Valley had other ideas.  Greene’s second TD pass of the half, this time to Isaiah Aguero, got the Hawks to within striking distance.  After Grigsby’s point after, the lead had been cut to 21-14.

Mathis booted the second half kickoff well out of the end zone, so Hardin Valley had to start its first possession of the half at its own 20.  After allowing the Hawks to move the chains once, however, the Cherokee defense stiffened and forced a punt. Before the quarter was done, South Doyle would score twice and increase its lead to 35-14.

The first score came on Lundy’s second TD run of the game at the 6:27 mark of the third, this time from 4 yards out.  Rollins then added his own second TD run of the game – a 1-yard sneak with an assist from fullback Harley Wheeler who helped push him over the goal line, with 1:23 left in the third.  Mathis was good on both points after, and the Cherokees had a three score lead heading to the final stanza.

After a successful onside kick recovery by Hardin Valley, it looked like the Hawks might draw a bit closer, taking over at mid-field with some momentum.  The Cherokee defense turned Hardin Valley over on downs, however, and the offense would put the game away with two fourth quarter scores, both by University of Tennessee verbal commitment Joc Bruce.

The first came at the 4:59 mark as Bruce scored on a 19-yard run.  Then after another HVA turnover, Bruce put the capper on the evening with a 21-yard burst to the end zone with just 3:09 left.  Mathis was good on 1 of the 2 points after, giving the Cherokees the eventual 47-21 winning margin.

While neither team was particular efficient in converting 3rd downs – South-Doyle was 3 of 9 and HVA just 4 of 11, a key statistic in the game showed the Cherokees converting on all 4 of its attempts to move the chains on 4th down.  HVA was 0 for 1 in that category.

Individually Bruce led the Cherokees in rushing with 147 yards on 19 attempts.  Lundy carried the ball 6 times for 64 yards, while Rollins’ 10 rushing attempts netted him 48 yards.  Rollins also hit on 10 of his 11 pass attempts, good for 88 yards.

Hawk senior running back Ryan Ferguson matched Bruce’s rushing total of 147 yards, carrying the football 21 times in the game.  Senior Nathan White, who came in at the quarterback spot for HVA after the starter Greene went out with an injury, hit on 12 of his 25 passing attempts, good for 114 yards.

South-Doyle improves to 3-0 on the year, and will return to IMAC play next week as they travel to Newport to take on the Fighting Cocks of Cocke County.  The Cherokees are currently 1-0 in league play with the win last week over Jeff County.

Hardin Valley falls to 2-1 on the year, and certainly has a tough task on its hands as it returns to league play and hosts the number 1 ranked team in the state in Class 6A in Maryville.

The broadcast of the South-Doyle at Cocke County game can be heard on AM 620 beginning with the pre-game show at 7 p.m.  It can also be streamed online by going either to www.southdoylefootball.net or www.johnsonu.edu/cherokeefootball.  I’ll have the play by play call, and will be joined by color commentator Kyle Blackburn and sideline reporter Drew Wolfenbarger.