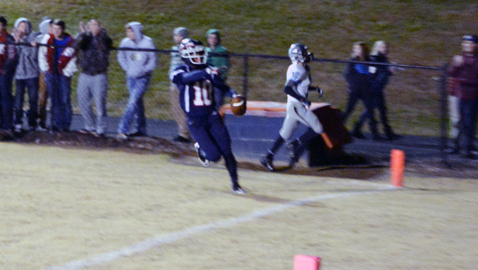 Radio Voice of South-Doyle Cherokee Football on AM 620 WRJZ

It took a while, but the 5th ranked South-Doyle Cherokee football team finally figured out a stubborn Gibbs team to advance on in the TSSAA Class 5A playoffs on Friday.  Four second half touchdowns erased a 7 point halftime deficit and proved to be the difference in the Cherokees 32-21 win.

That win certainly didn’t come as easy as one might expect a 1 seed to earn over an 8 seed, however.  Gibbs’ senior quarterback Preston Booth keyed an early lead for the Eagles, running the triple option to near perfection early on in this game.  His 1-yard touchdown run at the 3:35 mark of the first quarter gave Gibbs a 6-0 lead, and sent a message that the Eagles were serious about pulling an upset.  The extra point was blocked by Harley Wheeler, however, keeping the score at 6-0.

South-Doyle quarterback Brody Rollins came right back on South-Doyle’s next possession, however, and score on a nifty 52-yard run.  Logan Mathis’ point after gave the Cherokees a 7-6 lead.

Gibbs answered on its next possession to regain the lead.  Booth pitched the ball to fellow senior Brendon Wilson, and Wilson’s speed got him to the edge and in to the end zone from 6 yards away.  The Eagles went for two and made it work on a run by J.C. Valez, and Gibbs now had the lead at 14-7 at the 9:59 mark of the second quarter, a lead that Gibbs would take to the locker room with them at the half.

South-Doyle had been punched in the mouth during that first half, and senior linebacker Wheeler took it upon himself to try to get his team mates’ attention during the break.

“They came to hit,” Wheeler told me. “We knew they were going to come and play from watching film of their games against Oak Ridge and some other good teams. They popped us in the mouth the first half, but we came back and popped them in the mouth the second.  I just told my team that we have worked so hard from the pre-season up until now, and we weren’t going to let the season end.  I told the guys that there was no way we were going to lose this game.”

Wheeler’s Cherokee team mates apparently took his words to heart in the second half.

After holding Gibbs to a 3 and out for the first time in the game on the Eagles opening second half drive, South-Doyle would score on its first two possessions of the half, and then add two more scores in the 4th quarter to put some distance between themselves and the upstart Eagles.

The first score game on another Rollins run, this time from 33 yards out up the middle.  Mathis’ kick knotted the score at 14 with 7:45 to go in the third.

Then after another quick stop by the Cherokee defense Rollins and his offense struck quickly once again.  Rollins dropped back to pass, and found fellow senior wide receiver Shoan Labeoux behind the Gibbs secondary.  Lebeoux hauled in the pass and scored on the 52-yard long range hook up.  The point after kick was blocked, and the lead was 20-14 Cherokees.

South-Doyle added to the lead with 6:44 to go in the 4th when Joc Bruce exploded in to the end zone on a 4-yard run. The Cherokees went for 2, but came up short and the lead was now 26-14.

Pinned deep in its own territory and down two scores late in the game, Gibbs went for it on 4th down, but Booth’s pass was intercepted by senior linebacker Tomas Williams.  Williams returned the pick to the 12-yard line and on the first offensive play Malik Lundy’s burst up the gut found the end zone.  Mathis’ point after was pulled left, but the Cherokees had a three score lead at 32-14.

Gibbs tried to make it interesting when Booth scored his second touchdown of the night on a 12-yard run with 1:11 to go in the game, but after Brad Hawkins’ kick, the final points of the night had been scored.

Gibbs tried an onside kick, but the Cherokees recovered, killing the clock and sealing the 32-21 first round playoff victory.

Cherokee head coach Clark Duncan wasn’t surprised at the terrific effort his team got from the 8th seeded Gibbs squad.

“We knew they were a really good football team and that their scheme was good,” Duncan explained.  “We had a pretty good idea that they would come and grind at us and try to wear us down.  We had some trouble adjusting in the first half, but our defensive coaches made some adjustments and we came back out in the second half and got the ball back quickly and went and score twice quickly.  That was the difference in the football game.”

Rollins, who has been rock solid all season long from his quarterback position, struggled against the Eagle defense in the first half as he turned the ball over twice.  Duncan had faith that Rollins would get things worked out and come back and have a big second half, and the coach was proved correct.

“We have all of the faith in the world in Brody, and we all make mistakes at times,” Duncan said.  “But we knew he would come back and make plays for us in the second half, and that’s exactly what he did.  The bottom line was that our players made the plays when we had to have them, and because we did we are going to play next week.”

And while he was obviously disappointed, Gibbs coach Brad Conley raved about this group of Eagles.

“I am extremely proud of my team,” Conley told me.  “It’s a group that collectively is one of my favorites ever.  Their work ethic, their commitment to each other and their commitment to their school is just incredible.  They have been a joy to coach.”

Neither offense was able to put up big numbers.  Gibbs actually outgained the Cherokees, 266 yards to 252.  All of Gibbs yardage came on the ground.

Gibbs had 17 first downs, to South-Doyle’s 12, and converted on 8 of its 15 third down opportunities to just 1 of 5 for the Cherokees.

The Eagles more than doubled South-Doyle’s time of possession, keeping the football for 33 of the 48 minutes of game time.

Individually, Rollins was the ground leader for South-Doyle, carrying the football 8 times for a net 105 yards and 2 touchdowns.

Bruce had 11 rushes for 53 yards, while Lundy carried the football 7 times for a net 37.  Each scored a touchdown on the ground.

Rollins was 4 of 7 passing, good for 64 yards and a touchdown.  He was intercepted twice.  Two of his completions want to Labeoux, good for 59 yards.

Gibbs had two players exceed the 100-yard mark in rushing.  Booth kept the football 29 times out of the option offense, netting 105 yards.  Wilson’s 21 carries went for 102.

Gibbs closes out its season with a record of 5-6.

South-Doyle improves to 11-0 on the year, and will host the Cougars of Campbell County on Friday in the second round.  Campbell County won a thriller on Friday at home, scoring with 1:30 left to beat Morristown West 26-25.

The Campbell County at South-Doyle game will be broadcast live on radio station AM 620 WRJZ, with the streaming linked from www.southdoylefootball.net . I’ll have the play by play call, and will be joined by color commentator Kyle Blackburn and sideline reporter Drew Wolfenbarger. Air time is 6:30 p.m. on Friday.