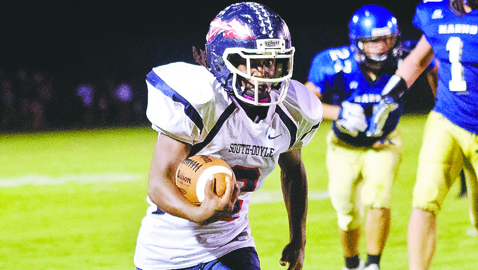 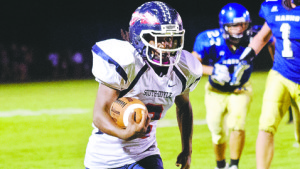 Photo by Adam Sullivan Malik Lundy had an explosive second half with multiple 40+ yard runs that set up three touchdowns. This run set up a 20-14 lead for South Doyle over Karns at the end of the third quarter.

Resilience is an asset most coaches love to have late in any football season. Bouncing back from deficits is huge to a team that has play-off intentions. Friday night at Karns High School, South Doyle head coach Clark Duncan experienced that same asset in week zero of play when his Cherokees not only bounced back, but stormed back with 29 unanswered points and a 32-14 victory. Sophomore Malik Lundy, who was silent in the first half for the Cherokees, blazed his way to 172 total yards on the ground to solidify the opening South Doyle victory. Karns went up early on a couple of touchdown connections from Matt Nauman. On the receiving end of the scores were Blake Bowman and Stedman Love. It would be the only scoring a second half Cherokee defense would allow all evening. South Doyle kicker Caleb Mitchell, who dented the score board twice, pulled the visiting Tribe to within a 14-6 contest. Whatever Duncan told his squad in the locker room at halftime must have been magical, as a complete turn around of his defensive scheme seemed to reign supreme. “We came out in the second half and put them (Karns) back in a hole. We came alive and made some huge adjustments out there. Keeping their quarterback contained was the key,” Duncan said.

South Doyle, who rode the legs of Lundy for most of the second half, was fortunate enough to implement just enough passing in the third quarter in order to offset the Karns defense. “We’ve got to be a little more balanced on offense,” Duncan continued. “We knew we were going to be a more ‘run’ oriented team this year. We have two young quarterbacks who have stepped up. That will pay off.”

Karns, who dropped last year’s contest to the Cherokees 7-0, did show some promise offensively in the first half, but a fumble and two interceptions late in the game proved to be too costly for the Beavers.

Assistant Coach Jeff Bryant of South Doyle, who assists in overseeing the offensive and defensive lines, was proud of the effort his unit made as well. “Coach (Jay) Whinery and I asked them to suck it up, give some pride, and make an effort in the second half. They responded. Karns presented some match up problems for us on defense. We knew they would. They brought a lot of guys from everywhere. I’m just glad we responded with our blocking schemes the way we told them to do,” Bryant added.

“Their quarterback (Nauman) is a phenomenal football player. He is very elusive. We practiced for him all week. Sometimes you can’t match a practice with what’s going to happen on a Friday night. I’m just glad we finally got him contained somewhat in the second half.”

Karns will go out of state this Friday when they travel to Knox Central (KY), while South Doyle will take its ‘idle week’ and recuperate from just a few minor injuries. “We are a little banged up. We will take this week to heal and get ready for our district opener against Morristown East at home. It’s good to finally get this season started,” Bryant concluded.

If history is any indication of what may happen for Karns, opponents may want to take heed. After dropping the South Doyle game last season, the Beavers went on a tear and made the play-offs for the first time in 37 years. Football is certainly back for both squads as they look forward to a promising 2012 campaign.