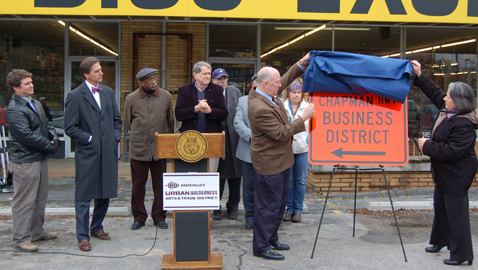 South Knoxville businesses were sent reeling after an announcement earlier this year that the reopening Henley Street Bridge would be delayed until February 2014, a full six months past its original estimated completion date.

Likewise, Vice Mayor Nick Pavlis, who represents South Knoxville on City Council, scheduled a meeting with State Senator Becky Massey and the Urban Wilderness Arts & Trade District to discuss challenges faced by the business community due to the bridge’s closure, as well as, possible solutions.

Last week Knox County Mayor Tim Burchett and Knoxville Mayor Madeline Rogero joined forces in an effort to aid the struggling business community. Mayor Rogero, along with Vice Mayor Nick Pavlis, announced a $20,000 grant from the city of Knoxville to help marketing and promotion efforts for the area.

“We want to be sure we’re helping merchants now, and also for the future,” said Pavlis, who represents South Knoxville on City Council. “By investing in marketing and promotions, we’re going to address both short-term and long-term needs for South Knoxville businesses.”

Mayor Rogero invited Knox County Mayor Tim Burchett to match the City’s grant, and he has pledged that Knox County will also contribute $20,000 to the marketing and promotions effort.

The City and County funds will be directed through the nonprofit Legacy Parks Foundation, which will serve as the fiscal agent and work with South Knoxville businesses to develop a marketing plan and identify promotional possibilities during the coming year.

Since the initial closure of the bridge two years ago, area merchants have expressed to City officials the need for assistance with marketing and better road signs to help detoured traffic reach Chapman Highway. TDOT has agreed to a City request to post the eight temporary signs, which will go up over the next week along major arteries including James White Parkway, Henley Street, Gay Street and Cumberland Avenue.

“The bridge closure has been very hard on South Knoxville merchants, particularly those closest to the river,” said Mayor Rogero. “I live in South Knoxville, and I can see the impact. As soon as we heard the extended construction schedule from the state, we started working on ways we can help promote the area and make sure people in other parts of the city know what’s here and how to get here.”

While the City works to improve signage and increase promotions, Mayor Burchett has drummed up a little promotion on his own. He, likewise, announced the implementation of SouthFest, a festival-like event that will drive people to South Knoxville in a way similar to a giant cash mob.

“There’s a perception in other parts of the county that it’s just too hard to get to South Knoxville because of the extended bridge closure,” said Mayor Burchett. “We want to bring people out south for this event so they’ll realize the detour is not hard to navigate.”

Some of the entertainment and activities at SouthFest will include live TV and radio broadcasts, live music, family-friendly activities, a car show, and circus-style entertainment from local Shriners.

SouthFest will be held on Friday, April 12 and Saturday, April 13 in South Knoxville. The event is intended to encourage people to shop, eat and have a good time at local businesses south of the river.

The City grant will be presented to City Council for approval at its next regular meeting, on March 19th.