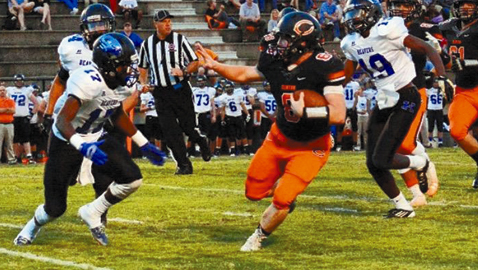 Aaron Watson, Clinton High’s male Student-Athlete of the Year, runs for yardage against Karns. Watson also was a standout in wrestling.

The leadership Aaron Watson displayed in football at Clinton High School may very well carry over to his next challenge in life.

Clinton’s male Student-Athlete of the Year, a two-time All-District 3-AAA performer and team captain as a senior, will soon be joining the Air Force.

“I’m going to try to serve a full 20 years. Seeing all the benefits and what you can do with the Air Force is just an awesome experience.”

“It was an awesome honor to get,” noted Watson, who had a 3.5 grade point average.

On the field, Watson, a running back and linebacker, totaled 1,048 all-purpose yards with eight touchdowns as a senior and had 45 tackles on defense. He earned the Dragon Award.

Watson also stood out in wrestling as Clinton started a program two years ago. Wrestling in the 182-pound weight class, he placed third in the region and qualified for the state tournament his senior year.

Watson didn’t set his sights on being a college athlete.

“I never made a highlight tape or anything,” he pointed out. “It’s nothing like anyone was pushing me away from the idea, it was just that ever since I was 7 years old, I’ve known what I wanted to do and that was serve in the Air Force just like my father.

“But don’t get me wrong – I would’ve loved to play football or wrestle in college, but I just loved leading and having a great time with my friends in high school.”

The next step in the enlistment process will be going to MEPS (military entrance processing station) and swearing in and undergoing a physical.

“As of right now, that date is July 8,” added Watson. “I’m just so thankful for everything God has blessed me with – my friends and coaches that have pushed me to be the best I can be, and my family for all the support they have given me.”