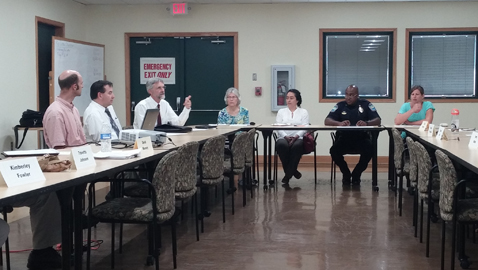 Photo by Mike Steely.
Jim Hagerman speaks to the Neighborhood Advisory Council about how to go about closing a street for a special event.

Ever thought about closing a street in your neighborhood for a street fair, craft show or other special event? At first it sounds like a great idea until you start looking into it and find that the city of Knoxville has stringent requirements to shut down a street.

Amy Midis, of Forest Heights Homeowners Association, mentioned street closings for functions in a recent meeting of the Neighborhood Advisory Council and Wednesday evening the subject was discussed at the council’s monthly meeting at the L.T. Ross building.

To address the process of having a street closed for an event several city officers spoke, including Jim Hagerman, Jeff Branham, Officer Ron Green and Elaine Frank.

Hagerman, Director of Engineering, said that city takes a traditional view of street closings which often involve closing routes because of construction work. He told the council that any request to close a street, even for a short period of time for an event, must start with an application filed with the Office of Special Events.

He said closing a cul-de-sac would be easier than closing a city street because there’re no outlets and only one barrier would be needed. Hagerman went on to detail the requirements a neighborhood would need for closing a route. Those would include having at least one to three policemen, a number of barricades depending on the number of intersecting streets, a study by engineering of traffic flow, and insurance to cover the event. Emergency vehicle access would have to be provided as well as detour signs.

Police Captain Ron Green said that a barrier must also have a police officer and said the cost is $ 30 per officer. If three or more officers are needed, a neighborhood would also need a police supervisor.

Hagerman said an event sponsor must also pay for a professionally developed traffic study, which he said could cost from $500 to $5,000, depending on the size of the event. He added that the plan could be used with a recurring event.

The form to request a street closing asks for the street name, dates, applicant’s name and address, as well as a description of the project. Permission must be given by the police department, and engineering department.

Hagerman said the policy concerning street closings is “still evolving.” He suggested that the neighborhoods also talk to their representative on city council and said “there may be an alternative” for people wanting to close a street for an event. But he stressed that any event starts with the request to the Office of Special Events.

The council asked about the “CICLOVIA” event now being planned in the city that requires street closings. Hagerman said the city is promoting the event. Ciclovia would be a major event downtown and would open the city streets to bikes, walking, skating and a fair-type celebration.

Liliana Burbano, of the Knox County Health Department, said the event is about getting people out and active. She said that Knoxville has a 67% inactivity rate. While the Ciclovia event could include activities like a street fair, Burbano said plans are still being worked out and that the event is “a pilot” to make sure it goes well. It could possibly include closing one lane of the Henley Bridge and take place on a Sunday afternoon.

The council also heard from Caroline Cooley, president of Bike Walk Knoxville, who spoke about including bikes on streets.

Hagerman was asked if a pedestrian bridge was being planned to cross Western Avenue and link Victor Ashe Park with another greenway and he said it was in the early stages of planning.

In other matters Dave Massey, the city Neighborhood Coordinator, said he is working with the planning commission on amending the proposed sign ordinance to permit neighborhood monument signs to be exempt from the new 25-foot setback from a street. He said currently there is a $50 fee and approval from the Board of Zoning Appeals to permit such signs.

The new sign ordinance is at the planning commission after passing first reading at city council and goes back to council for final approval.

Massey said that many neighborhood signs are near or on right-of-ways but believes those would be grandfathered into the new ordinances. He also said that he’s asking that banner signs promoting neighborhoods be permitted for a year or during special events. He announced that the neighborhood council will not meet in July but will resume meeting monthly in August.