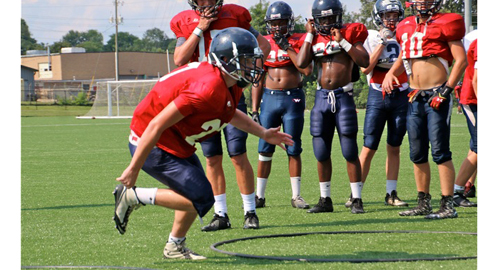 Over the years, the Knoxville high school football jamboree has been called “a glorified scrimmage” by some and a “dress rehearsal” by others.

For many years, it was played at Neyland Stadium on the University of Tennessee campus – a once in a lifetime opportunity for many high school players to experience the thrill of playing in a Division 1 college stadium.

The Knoxville Orthopedic Clinic Kick-Off Classic will be a two-night affair this year, with games being played Thursday night at Central High and Friday night at West High. Action starts each night at 7.

“We look at the jamboree as both a scrimmage and a fun event to be in,” said veteran Webb School Coach David Meske, adding it brings “excitement for the upcoming season. I think it does help with game jitters, as you are playing in front of a crowd.”

Bearden’s Morgan Shinlever said, “We treat the jamboree as a trial run for a game day. We practice before the jamboree and then move to a pre-game run-though.”

Among the benefits are getting “experience with travel and playing in front of a large crowd.”

Gibbs coach Brad Conley likes the benefits gained from the jamboree without the pressure of trying to win.

“The Jamboree is an opportunity to deal with first-game jitters without having too much on the line,” said Conley. “Generally, we want to play as many kids as possible without giving too much concern to the outcome.

“Most importantly to us coaches, we want NO injuries. For many players, this is the largest crowd they will perform in front of; it is a good experience for our players.”

Karns Coach Tobi Kilgore said, “We treat the jamboree like any other scrimmage. Our starters will start and play a set number of reps and then we will rotate through our roster. It is good practice for our kids to get comfortable playing in front of a large crowd.”

What does a team gain the most from playing in the jamboree?

“I think it helps eliminate a lot of those first-game nerves that can happen,” answered Kilgore, listing that as the “biggest positive” from the jamboree experience.

“It gives kids who have never started the opportunity to get that out of their system and be ready to go Week 1. I also think it helps prepare us for the atmosphere of a Friday night crowd and the opportunity for us to compete against a defending state champion (Webb) this year.”

Thursday at Central High: Austin-East vs. The King’s Academy, Halls vs. Anderson County, Central vs. Gibbs, Powell vs. Carter.