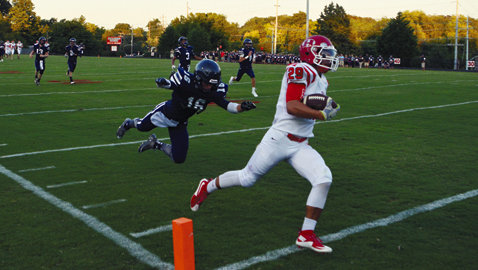 Photo by Dan Andrews.
Halls High School’s Matthew Runge-Gold (29) scampers past Anderson County’s Everett Dews in Thursday night’s portion of the K.O.C. Kickoff Classic at Central High School. Runge-Gold caught a pair of touchdown passes for the Red Devils, who played to a 14-14 tie against the Mavericks.

The TSSAA’s new Division I region alignments and playoff format certainly will give high school football a different look this season, and head coaches responding to a survey by The Knoxville Focus last week welcome much of, if not all, the changes.

“I like the new region alignment,” replied Christian Academy of Knoxville’s Rusty Bradley, whose Warriors are members of Class 3A, Region 2.

“I also like the new format because it takes out the uncertainty of the playoffs as far as who your opponent could be in the first round.”

There are eight new regions that include teams from The Focus’ coverage area.

For classifications 1A through 5A, the top four teams in the region standings at the end of the regular season qualify for the post-season playoffs. It’s that simple.

In Class 6A, which includes schools with the state’s largest enrollments, all teams will automatically advance to the playoffs. Bearden and Hardin Valley Academy are among the eight teams in Class 6A, Region 1.

“It is going to be a very challenging region to play in,” said Bearden coach Morgan Shinlever via e-mail. “Teams will have to be on their “A” game week in and week out.

“Regular season motivation is the playoff seeding for the first round. The top four teams in our region will host a first round game. Home field advantage in the playoffs goes a long way when an opponent has to travel an hour or more.

“An automatic qualifier for the playoffs can be looked at several different ways,” added Shinlever. “I believe any time you can get your kids a guaranteed extra game it benefits them on various levels – more game experience, travel in a playoff atmosphere and an extra week of player development.”

Farragut will compete in the new Class 5A, Region 3, marking the first time the Admirals haven’t been in TSSAA’s highest classification.

“Farragut is what it is because of enrollment,” said veteran coach Eddie Courtney. “We think we will be back in Class 6A in two years!

“I like a format where top four teams from a region go to playoffs and 1 plays 4 and 2 plays 3 in the first round.”

Two other Knox County teams also have lower classifications in the new two-year alignment period, with Austin-East going to Class 2A and Central to Class 4A.

“I feel good about the region alignment that we are in,” said A-E Coach Jeff Phillips. “We play 2A ball and I knew going in that it would mean longer away games as there aren’t any schools from Knoxville in our region besides Grace.

“The change to the top four teams doesn’t really matter to me,” Phillips added. “I feel like you still have to win games to be in the playoffs. I guess it makes it easier for the fans to know if your team is in.”

The new Concord Christian program is in Class 1A, Region 1.

No changes were made in Division II. The King’s Academy and The Webb School remain in the Class A East/Middle region.

Maryville also won the Class 6A state title, edging Ravenwood 35-34, while Alcoa bowed to Christ Presbyterian Academy 7-0 in the Class 3A title game.

FOR STARTERS: Hardin Valley Academy will host West in this season’s first game Thursday night. It will be televised on MyVLT.