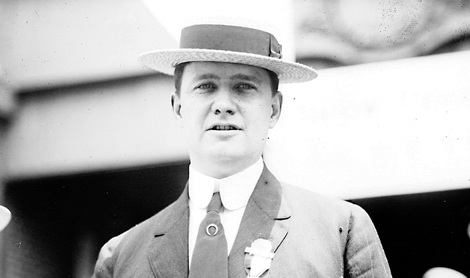 Senator Luke Lea had lost his reelection bid in November of 1915, running third behind Congressman Kenneth D. McKellar and former governor Malcolm Patterson.  Lea’s defeat occurred for a variety of reasons, not the least of which was his affiliation with the “fusionist” movement in Tennessee.  Having benefited from his alliance with “Independent” Democrats and Republicans, Luke Lea was despised by many regular Democrats.  Despite his strong support for Tom C. Rye’s election as governor in 1914, Lea had not erased the perception amongst most Democrats that he was, at heart, a fusionist or rank opportunist.  Lea had also been unable to refrain from interfering in political matters in Tennessee during his time in the United States Senate, nor had he provided especially effective constituent service, something for which K. D. McKellar would become legendary.  McKellar would go on to become Tennessee’s longest serving United States senator, a record he still holds to this day.

Senator Lea was bitterly disappointed by the failure of Governor Tom C. Rye to endorse his reelection bid, although it was hardly a reasonable expectation.  Rye clearly understood Lea was a controversial figure inside Tennessee’s Democratic Party and the governor didn’t want to offend the supporters of the other candidates for the United States Senate.

Lea’s biographer and daughter, Mary Louise Tidwell, cites opposition from the L & N Railroad has contributing materially to the senator’s defeat.  Mrs. Tidwell pointed out in the biography of her father that allegedly the railroad poured money into the McKellar campaign in Knox County.

Senator Lea watched as McKellar again stunned most observers by winning the run-off election, beating Malcolm Patterson by more than twenty thousand votes.  McKellar handily defeated former governor Ben W. Hooper in the general election, although Hooper made a good showing.  It would be the last time a Republican would seriously contest a seat in the U. S. Senate in a general election until Howard Baker and Dan Kuykendall ran in 1964.

Although defeated, Luke Lea had sixteen months left to serve in the United States Senate.  Lea returned to Washington, D. C. for the session of Congress.  Lea served out the remainder of his term, but the health of his wife was quite precarious.  Mrs. Lea had been gravely ill during much of her husband’s senatorial campaign and in September of 1916 she was described by her daughter as being “desperately ill.”  Mary Louise Lea actually suffered a series of heart attacks, although she survived and seemed to improve slowly.

After leaving the United States Senate, Luke Lea, already a successful businessman and publisher, worried about the country becoming involved in the World War raging in Europe.  Lea thought it increasingly likely America would be drawn into the conflict and the former senator concluded he would raise a volunteer regiment to fight should the United States enter the war.  Governor Tom C. Rye gave Lea a commission as a lieutenant colonel and was later made a full colonel, a title he kept for the remainder of his life.

Lea succeeding in forming an artillery company and the crossing of the Atlantic to Great Britain was a trip the former senator never forgot.  There was always a threat to the convoy of attack by German submarines and the captain of the ship ferrying Lea and his men across the Atlantic told him on at least one occasion, a ship had been fired upon.  Rough weather made the voyage miserable and Lea was much relieved when he and his troops landed near Liverpool.  Lea and his soldiers left the ship and were reviewed by the Duke of Connaught before boarding yet another ship to cross the English Channel.  It was not a comfortable crossing, as the ship was designed to hold less than two hundred passengers and there were at least one thousand troops on board.

Colonel Lea and his men were stationed at a camp in Brittany and commenced training.  Lea kept in touch with his business affairs and managed to keep an eye on Tennessee politics, as well as penning regular letters to his ill wife.  Lea and his men eventually went to defend Verdun, a powerful French fortress under attack by the Germans.  A line of some two thousand artillery guns opened fire simultaneously, inflicting heavy casualties to Kaiser Wilhelm’s armies.

Luke Lea’s participation in the World War has largely been forgotten, save for one episode that became famous: Lea’s attempt to seize Kaiser Wilhelm.  With the close of the war and Germany’s defeat, Kaiser Wilhelm, Emperor of the German Empire and King of Prussia, was forced to abdicate.  The former Kaiser sought asylum in Holland, which was granted by the Queen of the Netherlands.  Wilhelm and his entourage were guests in the home of Count Godard Bentinck.  According to Lea’s biographer, the former senator blamed the deposed Kaiser for the war and was determined to see Wilhelm punished.

Lea developed a clandestine plan to capture the former German monarch while on leave and did not inform the servicemen with him of the true nature of their excursion until the last possible moment.  Lea gave each man the option of remaining behind, but each man decided to follow his lead.  Despite being on leave. Colonel Lea was dressed in his uniform and when he and his men reached the gates of County Bentinck’s castle, the sentry on duty inexplicably opened the gates at Lea’s demand and took them inside, where they were ushered in the library.

Lea was greeted by the son of Count Bentinck who, although exquisitely polite and coldly formal, demanded to know why the Tennessean was there.  After introducing himself and the other officers accompanying him, Lea did not reveal the true purpose of his visit, but rather merely asked to see the Kaiser.

Lea claimed he heard a conversation, in German, between the Count’s son and someone he addressed as “Your Majesty.”  The younger Bentinck returned to the library and told Colonel Lea that the Kaiser could not possibly grant an audience without knowing the purpose of their visit.  It was then another young man arrived, who introduced himself as the Burgomaster of Amerongen Castle.  He, too, demanded to know the purpose of the Americans’ visit.

Luke Lea began to reply in German, when the Burgomaster interrupted in what the Colonel later described as “beautiful, fluent Bostonian English”.  Despite speaking in his own native tongue, Colonel Lea still refused to reveal his true purpose.

The Kaiser’s Dutch hosts finally demanded to know if Lea and his soldiers were there as the official representatives of the American government.  Lea could not make that claim.  After being served water and cigars by the butler, Lea and his men left, only to discover their cars were surrounded by armed sentries and townspeople.  No effort was made by anyone to detain them and they left Amerogen Castle peacefully.

Lea was quite nearly court martialed over the affair and the Americans were further embarrassed by the fact one of the soldiers had taken as a “souvenir” an ashtray bearing the monogram of the German Kaiser.  General John J. Pershing, head of the American Expeditionary Force in Europe, described Luke Lea’s foray to capture the Kaiser as “amazingly indiscreet”.  According to Lea’s biographer, off the record, General Pershing was quoted as saying he would have given a year’s pay to have accompanied Lea.

Luke Lea was on board a ship, returning to the United States when he received a telegram that his wife had died.  Upon reaching American shores, Lea was met by his father-in-law, Percy Warner, and his son and namesake, Luke Lea, Jr.   To add to his sorrow, Lea learned that his wife had been beside herself with happiness to hear that her husband was making his way home.  Mary Louise Lea had then become quite ill and asked her son to telephone the doctor, but she had passed before the doctor could arrive.

Lea’s homecoming to Nashville was a happier affair and the Colonel led his men on parade and were officially welcomed back by Governor A. H. Roberts.  A banquet of roasted turkey was provided by the American Red Cross at the Nashville Hippodrome.

Luke Lea resumed his business affairs and ownership of the Tennessean.  There was speculation he would run for office again and many thought he would be a strong candidate following his service in World War I.

Lea had other things on his mind.  Devastated over the loss of his wife, he found solace in the company of his late wife’s youngest sister, Percie, named for her father, Percy Warner.  “Miss Percie” and the former senator became engaged and were married on May 1, 1920.

Lea purchased a new house for his bride, although he began to experience some financial difficulties following the war.  According to his daughter and biographer, Lea found himself “usually overextended”.  The former senator attempted to reduce his indebtedness and Mrs. Tidwell acknowledged there was friction between Lea and his mother, who had loaned her son considerable sums.  Lea decided to purchase a bigger house for his family when Miss Percie announced she was expecting.  Mary Louise Lea, named for Lea’s first wife and her mother’s sister, was born on February 21, 1923.

Although there was occasional talk and speculation the former senator would be a candidate yet again for some high office, Luke Lea was preoccupied with his business affairs.  That is not to say that Lea had lost interest in politics; quite to the contrary.  In fact, Luke Lea’s interest in politics was as great as ever.  In time, he would become one of the most influential men in Tennessee politics.