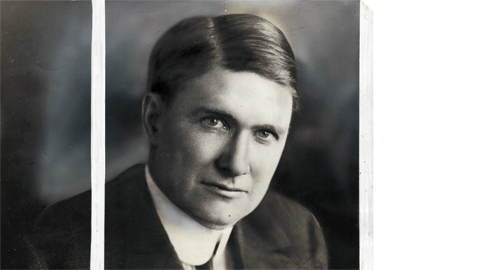 Photo from the author’s personal collection.
Portrait of Senator Luke Lea of Tennessee.

The election of Woodrow Wilson as president of the United States in 1912 pleased Luke Lea and he was an ardent supporter of the new chief executive. Senator Lea proved to be quite progressive, supporting an eight-hour workday for employees, allowing women the right to vote, and made legislative war upon big corporate monopolies and trusts. Lea did manage to upset some members of Tennessee’s General Assembly when he started an investigation into possible corruption in the distribution of free passes from railroads to politicians. While the investigation never really was completed, the pressure was enough to cause the railroads to stop the practice of giving the passes to friends and legislators.

With the adoption of the Seventeenth Amendment to the Constitution of the United States, U. S. senators would be elected by popular vote. Lea had been elected in 1911 by the Tennessee General Assembly, but would face the people of Tennessee in 1916. Senator Lea had become something of a polarizing figure in Tennessee politics. Associated with the fusionist movement in Tennessee, Luke Lea was cordially disliked by a great many Tennessee Democrats. Lea was also intensely disliked by E. B. Stahlman, publisher of the Nashville Banner. Lea’s ownership of the Nashville Tennessean gave him a mouthpiece for his own views and it was rare when the two men agreed on anything. The competition between the two newspapers became increasingly personal and Stahlman’s Banner pounded hell out of Luke Lea constantly.

The first crack in the fusionist façade appeared in 1914. Republican Governor Ben W. Hooper was seeking a third two-year term. Hooper had reason to believe he could win yet another term as he had defeated two of the most popular and prominent Democrats in the state, former governors Robert L. Taylor and Benton McMillin. Lea, likely with an eye toward his own reelection campaign in 1916, decided to back Tom C. Rye for the governorship. Rye, unlike Bob Taylor and Benton McMillin, was largely unknown throughout the state, save for a sliver of West Tennessee where he had served as Attorney General of the Thirteenth Judicial District. Yet being an unknown and a fresh face helped Rye in his campaign for the governorship. Rye carried no political baggage and Tennessee Democrats had finally resolved the prohibition issue, which helped to take the high ground away from Ben Hooper.

Senator Lea strongly backed Rye’s candidacy and dispatched his secretary or Chief of Staff to Nashville. John Draper Erwin, Lea’s secretary, would later become a newspaperman himself and was a future Ambassador to Honduras. Erwin reported almost daily to Senator Lea on Rye’s progress and the senator sent back detailed instructions and suggestions. Rye was nominated and Senator Lea continued to do all he could to help. Lea personally paid for the expense to bring William Jennings Bryan to Tennessee and the “Great Commoner,” enormously popular in the Volunteer State, traveled by special train. That same train was paid for by none other than Luke Lea. Although detained in Washington by Congressional business and unable to join Bryan on the campaign trail, Senator Lea kept a close eye on Bryan’s progress. The Nebraskan was greeted by enthusiastic crowds numbering in the thousands everywhere he went. Thousands were turned away from Ryman Auditorium when William Jennings Bryan spoke in Nashville.

Governor Hooper, realizing the extent of Lea’s aid to his opponent, spent less time excoriating Tom C. Rye than he did Luke Lea. E. B. Stahlman and his Nashville Banner continued to belittle Lea, oftentimes in the most blunt and coarse language possible. In Stahlman’s opinion, Luke Lea was, quite simply, a liar, opportunist and traitor to the Democratic Party.

Rye defeated Governor Hooper and the Democrats gained control of both houses of the Tennessee General Assembly. Senator Lea was delighted with the victory of his protégé and felt sure it would aid his reelection in 1916 substantially. Still, Tennessee’s Democratic Party was divided, inasmuch as regular Democrats continued to smolder over Lea’s alliance with the fusionist movement. Many powerful Democrats loathed Luke Lea, not the least of which was Fourth District Congressman Cordell Hull. Several members of the Tennessee’s Congressional delegation were considering bods to oppose Lea in the Democratic primary. Hull himself pondered running against Lea. Congressman Thetus W. Sims of West Tennessee was making inquiries about a Senate race as was Congressman Kenneth D. McKellar of Memphis. Congressman John Moon of Chattanooga liked Luke Lea not at all and neither did Congressman Finis Garrett of Dresden. The majority of Democrats in the Tennessee Congressional delegation had little good to say about Lea. Senator Lea, according to his biographer and daughter, Mary Louise Tidwell, dismissed the Congressmen as “the Allies” and prepared his reelection campaign.

Lea was also disliked by his colleague in the United States Senate, John Knight Shields. Senator Shields’ dislike of Luke Lea would have serious political repercussions during the primary contest.

Tidwell credits Congressman Cordell Hull with engineering the plan to hold the Democratic primary for the United States Senate seat in 1915, a year in advance of the regular general election. Control of the election machinery in Tennessee fell to Lea’s enemies and the primary was set for November 20, 1915, with provision for a run off election in December of the same year.

After having bitterly opposed the notion of an early primary unsuccessfully, the embattled senator announced he would indeed be a candidate to succeed himself and assured his fellow Democrats the Tennessean would loyally support the eventual nominee. Congressman McKellar announced his own senatorial campaign August 16, but there was still yet another candidate to enter the Democratic primary.

Former governor Malcolm Patterson, forced from office following his pardon of Colonel Duncan B. Cooper in 1908, decided the time was ripe for him to make a political comeback. Patterson declared his candidacy for the United States Senate in September of 1915. Luke Lea and Malcolm Patterson had been political adversaries for years; Lea’s rise in Tennessee politics paralleled the descent of Patterson’s own career. Neither liked the other and both Patterson and Senator Lea concentrated their fire upon one another, leaving K. D. McKellar to quietly cross the State of Tennessee and present himself as the one candidate who could truly unite the Democratic Party. The Republicans intended to field a strong candidate and it soon became apparent former governor Ben W. Hooper would be the GOP nominee. Having successfully been elected governor twice due to a fractured Democratic Party, many Tennessee Democrats realized he would be a formidable candidate. Both Malcolm Patterson and Luke Lea were polarizing figures and heartily disliked by thousands of members of their own party. The idea of nominating either Luke Lea or Malcolm Patterson sent shivers down the spines of many Democrats who believed Hooper would defeat either man. That same logic made the claim by Congressman McKellar that he would be the strongest nominee in the fall election of 1916 all the more compelling.

Lea, a resident of Middle Tennessee, decided to open his own campaign in Weakley County in West Tennessee, home to both Malcolm Patterson and K. D. McKellar. Both Patterson and McKellar were from Shelby County and Lea hoped to make a decent showing in an area where he anticipated he would be weak. Lea also was well aware of his polarizing personality and stated in his speech he genuinely hoped his opponents would campaign on issues, not personalities.

Senator Lea tried hard to maintain the high road, likely not because of his personal regard for his opponents, but due to his knowledge that dividing the Democratic Party would imperil any chance he had of winning the general election against Ben W. Hooper.

Former governor Malcolm Patterson had no such scruples and he maintained he had been personally betrayed by Luke Lea. Senator Lea replied he had never betrayed any friend, but had ceased to support men who had betrayed their own principles. The rhetoric in both Luke Lea’s campaign and that of Malcolm Patterson continued to escalate, while Congressman McKellar stressed that he was the “harmony” candidate. McKellar did charge that Lea was offering federal patronage and appointments as inducements for support from powerful Democrats. Lea retorted that he would drop out of the Senate race if any individual would come forth and verify McKellar’s charges.

As with any incumbent, Lea’s record in the United States Senate became fodder for his opponents. Both Congressman McKellar and former governor Patterson hit Lea for his frequent absences from the Senate. Ignoring Congressman McKellar, Patterson boldly challenged Senator Lea to meet him in debate. Lea accepted and their joint appearances drew enormous crowds who listened as the two men tore each other apart. While Senator Lea and Malcolm Patterson feasted upon one another’s political flesh, Congressman McKellar continued traveling across the state, making new friends and supporters. The heated rhetoric between Luke Lea and Malcolm Patterson could not have done more to bolster McKellar’s contention he was indeed the harmony candidate and the only Democrat who could unite the party against the Republicans.

Senator Lea was dismayed and deeply disappointed by Governor Tom C. Rye, whom he had helped substantially during the 1914 campaign. Lea had anticipated electing a governor friendly to him would aid his own reelection campaign, but Rye remained silent throughout the senatorial primary. There would be no endorsement from Governor Rye.

Lea made a strenuous canvas all across Tennessee and according to Mrs. Tidwell, by the close of the primary campaign, the senator had made more than one hundred and thirty speeches and appeared in eighty of Tennessee’s ninety-five counties.

As the primary grew more heated, Senator John Knight Shields quietly sent word to his own appointees and patronage employees in Tennessee he preferred Congressman McKellar. Shields lived in East Tennessee and McKellar received considerable support from Democrats in an area that was largely dominated by Republicans.

E. B. Stahlman, Lea’s caustic publishing rival, took his parting shot at the senator in an editorial published the day before the primary election. Stahlman said his newspaper was “opposed to Luke Lea because neither his character nor his intellect qualify him for the post of United States Senator.” Stahlman said Lea could not be trusted by anyone and concluded that the senator’s record “has been a blank”.

Luke Lea had been eliminated in the Democratic primary contest to retain his seat in the United States Senate. Congressman McKellar and former governor Malcolm Patterson would go on to contest the only run-off election for statewide office in Tennessee’s history.

It was a stinging defeat for Luke Lea.