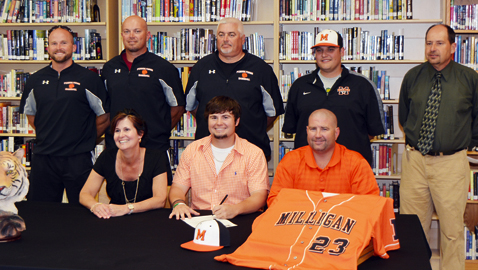 His first name fits him well.

A hard-hitting first baseman and crafty left-handed pitcher, Colt Buchanan has been a horse for Pigeon Forge, again one of the top high school baseball teams in the state.

He also loves the outdoors, fishing and hunting.

Colt, short for Colton, will continue his baseball career at Milligan and have the opportunity to be a two-way player like he has been in high school. The four-year starter for Pigeon Forge signed scholarship papers with the Appalachian Athletic Conference school Wednesday, April 24.

“Milligan has a beautiful campus,” said Buchanan, who also bats from the left side. “Everybody up there was really nice. It felt like home.”

The 5-foot-11-inch, 195-pounder, who hits in the No. 4 spot in the Tigers’ batting order, chose Milligan over Emory & Henry (Va.) College. King College in Bristol also showed interest.

“No. 1, Colt is a great kid and comes from a great family,” said Chris Gordon, Milligan’s pitching coach and recruiting coordinator, after Buchanan became the Buffaloes’ 11th signee of the year. “And his high school coach, Mike Guinn, consistently produces players with a good base knowledge of the game and players who have been winners.”

Guinn, whose current squad is 28-2 heading into tonight’s 7 o’clock regular season finale at Sevier County, said Buchanan is “one of our top pitchers this year and has been outstanding. He has command of three pitches – fastball, change-up and curve. He also is excellent defensively at first base and a solid hitter with gap power to all fields.

“He’s the yes sir, no sir type, a hard-working young man who has gotten better each year.”

Said Milligan’s Coach Gordon: “Colt is great around the bag and a great contact hitter. I see him hitting home runs and even more doubles. He’s a Lyle Overbay type player.”

“We’re going to allow Colt to do both (play first base and pitch),” added Gordon. “We’ll definitely give him the opportunity. His immediate impact will be at first base.”

Buchanan admitted, “I’m probably stronger as a first baseman, but I love pitching, too.”

Like many boys growing up, he’s had “a lifelong dream to play major league baseball.”

“Always the New York Yankees and (first baseman) Jason Giambi (who now plays for the Cleveland Indians),” he answered.

Buchanan plans to major in aquatic biology, which will lead someday to a job of “going out in the lakes and rivers, testing pH levels, studying and tagging fish and their migratory patterns.

“I’ve been fishing since I was 3 years old, and within the last year I’ve gotten into hunting water fowl, ducks and geese.”

“The goal of our entire team is getting to the state and winning,” he said.

The Tigers reached the state semifinals last season. In fact, Buchanan came in to pitch in the season-ending 2-1 loss to Goodpasture, one of the pitching highlights of his prep career despite the loss. He also has hurled two no-hitters in previous seasons for the Tigers.

In 31 innings pitched this season, Buchanan has a 5-1 record, 1.11 ERA, 37 strikeouts and allowed only three bases on balls.

Offensively, Buchanan is probably best known for his knack of getting on base. In 63 at-bats, he is hitting .381, with one home run, two doubles, one triple, 18 RBI and a slugging percentage of .476.

Pigeon Forge will be trying to make it back to the state tournament for the third time in six seasons under Coach Guinn when the District 3-AA tourney gets underway Friday, May 3, with games at Gibbs and Pigeon Forge.

“We have good senior leaders,” said Guinn, “and Colt is definitely one of them.”

Buchannan’s future NAIA team also will be in post-season play this week, as Milligan competes in the AAC tourney at Hunter Wright Stadium in Kingsport.