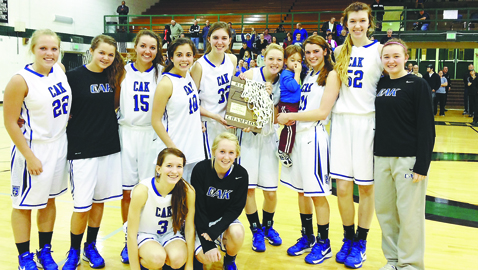 Christian Academy of Knoxville’s young girls basketball team battled from behind for the second game in a row to capture the Region 2-AA championship last Wednesday night at Carter High School.

The Lady Warriors found themselves down 7-0 before they could get a shot off against Alcoa’s full-court pressure defense. But this hole wasn’t anything compared to what CAK dug out of in the semifinals when it was down by 19 at halftime against Fulton.

Christian Academy caught up with Alcoa in the first period and eventually pulled away from the Lady Tornadoes late in the third period en route to a 62-44 victory.

The biggest news of the night, however, may have come after the game and before the Lady Warriors had left the gym, as Coach Steve Denny and his team found out they would be hosting top-ranked Grainger County in the March 2 state sectionals. The previously unbeaten Lady Grizzlies had been upset at Elizabethton 70-55 in the Region 1-AA finals.

“Both Alcoa and us have played tough schedules this season and hopefully that will have prepared us enough to both win on Saturday,” said Coach Denny, reacting to the turn of events in Region 1.

Sectional winners advance to the TSSAA state tournament in Murfreesboro this week.

Four years ago, Christian Academy, in Denny’s first season as head coach, made it to the state sectionals for the first time but lost to Greeneville 46-42 in overtime. The 2009-10 CAK team won a school record 26 games and the school’s first region crown.

CAK was ousted in the opening round of the District 4-AA tourney last season but beat top-seeded Alcoa 50-41 in this year’s district finals.

The Lady Tornadoes looked as though they had revenge on their minds, particularly at the start of the region rematch.

“I felt we regained our composure after they threw everything at us,” said Denny. “We handled it. We started playing solid and steady on offense and defense.

“We were a little too excited going in. We weren’t doing little things – passing and catching the ball.”

Alcoa got 15 points from Katie Stubblefield, 11 from Hannah Tate and nine from Tiffanie Moore.

A key juncture of the contest occurred late in the first half with CAK leading 23-22. A personal foul, followed by a technical foul, was called on Alcoa’s Moore after she battled Kelsey Naler for a rebound on Alcoa’s offensive end of the floor. Naler sank both ends of a 1-and-1 and then the two technical free throws, which gave CAK a five-point halftime lead.

Alcoa Coach Tonia Johnson had her team put on the full-court heat again at the start of the second half and the Lady Tornadoes pulled within two points (33-31). But Christian Academy scored 12 unanswered points over the final 4 minutes and 17 seconds of the third period for a 45-31 cushion. A 3-pointer from the right corner by Hammaker was huge.

Alcoa never got closer than 11 in the final period.

“We’re excited with the young talent we have,” said Denny, who starts three sophomores, one freshman and one junior. “We want to continue to build the program. It’s fun to know we’ve got about everybody coming back.”