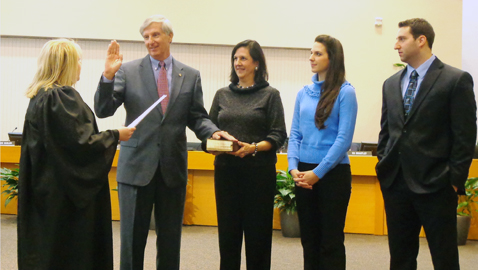 In what was expected to be a close vote, the Knox County Commission voted 8-2 to change its meeting times  from 2 p.m. to 5 p.m.

The argument for holding Commission Regular Meetings later in the day is that more of the public would be able to attend commission meetings.

Commissioners Mike Brown and Brad Anders voted to keep the current schedule at last Monday’s meeting.  Commissioner Brown questioned the cost of holding the meeting after 5 p.m., estimating about $10,000 per year in salaries for security officers and overtime for city employees.

Under the newly adopted hours, the zoning hearings would begin at 7 p.m. “or immediately following the Legislative Session.”

Commissioner Sam McKenzie, who championed the idea, said that many people who work during the day would attend the later meeting. He said that the commission often delays some agenda items until later in the meeting so the public can attend.

“It is going to give them (the public) the opportunity to participate,” said Commissioner Randy Smith.

Commissioner Jeff Ownby said he was “fine” with the current 2 p.m. meeting hour but added that the constituents he spoke with wanted the later meeting time. He said people wanted to attend after they get off work.

“They want to be part of us and don’t have time (to do so) unless it’s after work” Commissioner Charles Busler said.

Brown said the vote on the Rules Committee to change the meeting times was not unanimous and that, “We can be as transparent at 2 o’clock as we are at 5 o’clock.”

In other business, the commission debated a resolution to hire a lobbyist in Nashville to “monitor” legislation there. Busler said that the commission should use the Tennessee County Commissioners Association more than it does and take part in three committees in that organization.

“Why we’re not utilizing that, I don’t know,” he said.

Commissioner Ed Brantley pointed out that the city has a lobbyist and that the TCCA represents all the counties in the state and “their base is rural.”

The agenda item, originally introduced by Commissioner Amy Broyles who was absent at last Monday’s regular session, was postponed until February.

The second and final reading to revamp the wordage authorizing the Internal Auditor to begin conducting an unexpected audit.  As written it permits the auditor to ask the audit committee chairperson of the audit and inform the commission chairman.

Commissioner Dave Wright said the Internal Auditor wanted to conduct an inquiry the action had to wait on approval from the audit committee. He said the “element of surprise” is important.

Commissioner Randy Smith had some hesitation in giving the power of an audit to “someone who is not an elected official.”

Wright also mentioned the beginnings of a look at fire protection in the county and reported on a “meet and greet” of the Fire Coverage Committee. He said the committee needs to set some goals and to add some of the local utility companies to the committee.

Brantley spoke of the new fire station planned for the Choto/Northshore area and said attention needs to be focused on the most populated areas of the county. Currently there is no county-wide fire department