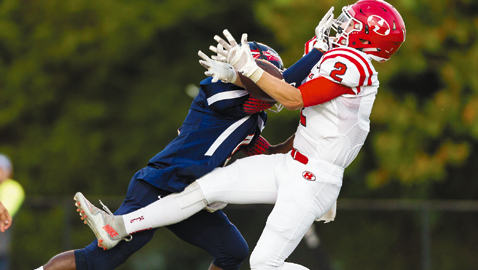 PHOTo BY TIM GANGLOFF — 2015 — hatpix.com
Despite being closely defended, Halls wide receiver Caden Harbin (2) makes a catch over the middle that gained 36 yards in the Red Devils’ opening drive Friday night at South-Doyle. Harbin had two TD catches in the Red Devils’ 30-7 victory.

Halls High’s football team enjoyed success in all three phases of the game – offense, defense and special teams – in notching its second win in a row.

“It was the most complete game we’ve had all year,” said Caden Harbin, junior wide receiver and defensive back, after the visiting Red Devils rolled past winless South-Doyle 30-7 Friday night at Billy K. Nicely Memorial Stadium.

During the course of the game, Halls coach J.D. Overton saw his offense score early and late on long touchdown drives. In between, his defensive unit intercepted two passes that led to TDs. Special teams contributed a field goal and excellent kickoff coverage.

The win improved Halls to 1-1 in Region 2-5A and 2-3 overall. The Red Devils have a week off before rival Gibbs makes the short trip over from Corryton on Oct. 2.

The young and rebuilding Cherokees, who finished 12-1 in reaching the state quarterfinals in 2014, are 0-5. They’ll play at Carter this Friday.

“Halls made a lot less mistakes than we did,” said South-Doyle senior captain Jimmy Fowler. “It’s small, very fundamental mistakes we messed up on. We had the heart, we had the effort, it’s just really small things that we’ve got to work on.”

Harbin caught touchdown passes of 26 and 6 yards from senior quarterback Andrew Davis in the second quarter as Halls took a 17-7 halftime lead. He also capped Halls’ scoring with a 2-yard touchdown run in the fourth quarter.

Briggs Marcantel’s 25-yard field goal gave the Red Devils a 3-0 lead in the opening quarter. Matthews Runge-Gold pulled in Davis’ third TD pass in the third quarter and weaved his way into the end zone from 13 yards out.

South-Doyle was limited to 23 offensive plays in the first half but did put together an impressive 80-yard scoring drive in the second quarter to pull within 10-7.

The Cherokees were gaining yards in chunks. On successive plays, sophomore Ahmadd Hardin ran for 15, Caleb Wender for 21 on a QB keeper, Jake Harper for 14, freshman Ton’Quez Ball for nine and Hardin or 13 more before scoring from the 2.

South-Doyle briefly looked as though it was going to make a game out of it.

However, after the Cherokees forced a punt and got the ball back, Halls sophomore Hunter Huff made one of the most important plays of the game for the Red Devils when he intercepted a pass and returned it 25 yards to the S-D 10-yard line with 3:16 to go before halftime.

Things did not get any better for South-Doyle after intermission. In fact, the Cherokees ran only 20 offensive plays in the second half. On their first play from scrimmage, Braden Anderson threw his second interception, with JT Freels getting the pick at the Halls 40.

Cook ran through a huge hole on the left side of the line and gained 36 yards to the Cherokees 15. Two plays later, Davis connected with Runge-Gold for six. That made it 24-7 with 9:51 showing in the third quarter.

Runge-Gold then turned in a big play on the defensive side of the ball from his safety position, recovering a fumble by Jake Harper after he caught a 7-yard pass from Anderson. Fowler, however, thwarted this scoring threat when he sacked Davis for a 16-yard loss.

Still leading by 17 points, Halls defenders pinned back their ears and started applying heavy pressure. A fumble in the South-Doyle backfield resulted in a 24-yard loss.

Cook was a workhorse, carrying the ball five straight plays to begin a time-consuming, 14-play, 41-yard march for Halls. Runge-Gold took a screen pass and gained 14 yards to the 4. Harbin tallied with 5:16 left.

The Cherokees didn’t quit. Senior John Doster made a great catch on a pass from Anderson that gained 29 yards to the Halls 8. But S-D could not get any closer as Brandon Manis had a 6-yard tackle for loss.

“I felt like we came out and our O-line blocked real good for us,” said Cook, who carried 18 times for 95 yards and had a 12-yard reception.

Cook also recovered a pooch kickoff at the South-Doyle 24 early in the second quarter, but Dylan Cameron intercepted a pass in the end zone to foil that Halls scoring bid.