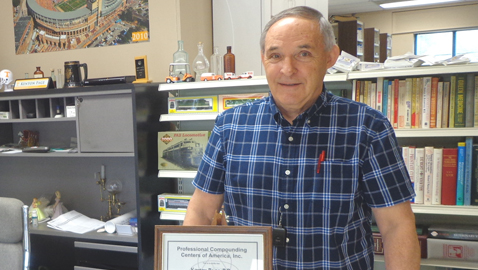 Since 1968 Kenton Page has been a familiar face in pharmacy in Fountain City. About three years ago, Page moved The Medicine Shoppe to its current location and just recently changed the name of his pharmacy to Fountain City Pharmacy. Previously, he worked for several years at Stevens Drug Store and then opened Page Apothecary.

Page specializes in compounding pharmaceuticals and is often sought out because of this specialty.

Page explained that a lot of medicines contain added ingredients that some people have reactions to and that compounding the prescription ensures that these ingredients do not go into the medicine. He told a story of man who lived in Halls and was a regular customer until the man started using one of the national chains for his prescription.

“He showed up and said ’I’m back,’” Page said. The man was having a reaction to the drugs he had been filling at the other store and was back for the care that Page provided.

“I don’t cater to the painkiller crowd,” he said.

What’s surprising is that the Fountain City Pharmacy gets a lot of referrals from other pharmacies that don’t compound drugs. He also does compounding for veterinarians.

“I don’t try to compete with those other stores. We’re just trying to fill in the gaps,” he explained.

He specializes in elderly and infant medications, hormone replacement, specialty meds and pet medications. Page goes outside the normal scope of a normal pharmacy.

Compounding is the art and science of mixing ingredients to suit prescribed dosage, strength, and flavor. A compounding pharmacist works with the doctor and the patient to find the right mix of medication. Page also talks with customers about the effect of medicines and any reaction a prescription could have, which ones don’t go well with other prescriptions, and even when and how to take a medicine. Compounding for children is especially important because many children don’t like the taste of certain medicines or have reactions to other ingredients.

Many of his customers have been using Page for many years and, whether new or not, they will always find Page behind the counter.

“They always see the same face here when they walk in,” he said.

The pharmacy is just off Broadway on Rennoc Road and is on the internet at www.fountaincitypharmacy.com. The pharmacy is open 9 a.m. until 6 p.m. Monday through Friday.

“I generally tell people the store is located across the street facing Mynatt Funeral Home or that I’m on the second floor above the Verizon store,” he said.