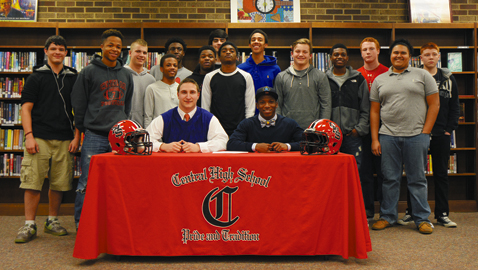 Photo by Dan Andrews.
Pictured above with team mates, Central High seniors Johnathon Holcombe, left, and Jajuan Stinson, right, were two of the seventy student-athletes who signed letters of intent on National Signing Day. Holcombe signed his National Letter of Intent to play football for Carson-Newman while Stinson signed to continue his football career at East Tennessee State. For their stories and those of other signees, look to Section C in this and future editions of The Focus.

Football and soccer players made up a large majority of the student-athletes who inked letters of intent on National Signing Day (Feb. 5) at high schools in The Knoxville Focus’ coverage area last week.

Of the 70 signees that were reported by athletic directors, 33 were football players and 21 were soccer players.

“We had 10 athletes sign letters of intent this (Wednesday) morning in the presence of their peers, family, coaches, teachers and several media representatives,” reported West Athletic Director Steve Killian via e-mail. “This ceremony brings such a positive image to our school, which is certainly deserved.”

Of West’s 10 signees, six were football players from the school’s Class 5A state runner-up team, including linebacker Cody Underwood, who will be a preferred walk-on at Tennessee.

Fulton, which repeated as Class 4A state champion with a perfect 15-0 record, had five of its football players to sign scholarship papers, including Xavier Hawkins, who will be going the farthest away to college at Oregon State.

Hagen Owenby of Powell, who also is bouncing back from knee surgery, will be a two sport athlete (football and baseball) at East Tennessee State University.

Todd Kelly Jr. of Webb School was the first University of Tennessee commitment to fax in his paperwork. Davidson College (N.C.) is getting the services of Webb classmate Anna Catharine Feaster, a three-time TSSAA Division II Class A state singles tennis champion.

Tanisha Walker of The King’s Academy has signed to play basketball at Coastal Carolina.