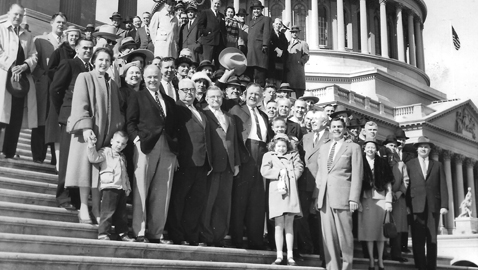 Photo from the author’s personal collection.
Congressman Robert A. “Fats” Everett celebrates his election to Congress on the steps of the Capitol with friends and family. Everett is in the center, waving his hat.

Long forgotten by most, the late Congressman Robert Ashton “Fats” Everett was one of the more colorful from the political pages of Tennessee’s history.  Everett was by any measure a political professional well before he ever was elected to Congress.

Tall and weighing in at over three-hundred pounds, most everyone called the genial Bob Everett “Fats.”  Former Congressman John Tanner recalls Everett’s father, “Mr. Charlie,” as saying about his son, “Why, Fats don’t mind hard work.  He’ll lie down right beside it and go to sleep!”  One young man who got his political start driving Everett around his district was a young Ned McWherter.

Born on a farm near Union City, Tennessee on February 24, 1915, Bob Everett attended public schools before heading to Murray State College.  Everett graduated from college in 1936 and that same year made his official political debut, winning election to the Obion County Court, the forerunner of the County Commission.  Everett was only twenty-one years old at the time.  Four years later, Everett was elected Clerk of the Circuit Court.

Like many other young men of the time, “Fats” Everett’s career was interrupted by World War II.  Everett served in the U. S. Army for three years, from 1942 until 1945, when he was discharged.  Bob Everett did not immediately return to Obion County after the war, but found a job in the nation’s Capitol.  Everett became the Secretary, or Chief of Staff, to Senator Tom Stewart of Tennessee.

Stewart, Tennessee’s junior senator, was an amiable and unassuming man, who worked hard to do things for Tennessee and Tennesseans.  Senator Stewart was largely overshadowed by Tennessee’s more colorful and powerful senior senator, Kenneth D. McKellar.  Fortunately, the two got along rather well and Stewart seemed not to mind deferring to the influential McKellar.

“Fats” Everett enjoyed Washington, D. C., which had to be quite a change from Obion County.  Everett enjoyed taking a drink and liked the social life of the Capitol, although he remained a life-long bachelor.

An announcement in December of 1947 turned Tennessee politics upside down.  E. H. Crump, leader of the Shelby County political machine, had been mortified when Tom Stewart had run for reelection in 1942 and actually needed the votes from Shelby County to win renomination in the Democratic primary.  Some of those closest to Crump plied the Memphis Boss with a running commentary on Senator Stewart’s supposed deficiencies.  Crump issued a statement in December of 1947 that he would not support Stewart for another term in 1948.  Instead, Crump would back an obscure judge from Cookeville, John A. Mitchell, whom he had never even met.  The Memphis Boss thought his pronouncement would be the last word on the subject, but a stubborn Senator Stewart declared he was running again, with or without Crump’s support.

Senator K. D. McKellar, who liked Stewart very much personally, was anguished by Crump’s decision and tried to change the Memphis Boss’s mind.  Very reluctantly, McKellar agreed to back Judge Mitchell and sadly noted since that time, his colleague had little to do with him.

McKellar and Crump had dominated Tennessee politics almost completely since 1932 and Crump’s capricious decision to dump Senator Stewart proved to be the worst single mistake of his long political career.  It opened the door for Chattanooga Congressman Estes Kefauver to win the 1948 Democratic primary.  Senator McKellar had flatly told Crump he didn’t believe Mitchell could win the election and he proved to be right.  Had Crump listened and supported Senator Stewart again, there is every reason to believe he would have been reelected.  As it was, Crump’s candidate ran a poor third and Congressman Kefauver won the nomination with a plurality of the vote.

Senator Stewart carried Obion County by a better than two-to-one majority, a sign of “Fats” Everett’s political potency in his home area.  With the defeat of Senator Stewart, “Fats” was out of a job, but not for long.

Gordon Browning, a former governor, was challenging incumbent Jim Nance McCord for the Democratic nomination in 1948.  Browning had left office in 1939 largely discredited, after having suffered a devastating defeat in one of the hardest fought political contests in Tennessee history.  Browning had returned to Tennessee after having served in World War II and Governor McCord’s popularity had plummeted due to his support for the sales tax, which had been implemented to give Tennessee school children free textbooks.  Tennesseans disliked the sales tax more than they appreciated the free textbooks for their children.

Browning won a decisive victory over Jim McCord, despite the governor having the strong backing of both Senator McKellar and E. H. Crump.  As Browning put together his administration, he asked “Fats” Everett to become his chief administrative aide.  “Fats” was off to Nashville and served under Browning for four years.

Governor Browning had thought of running for the United States Senate in 1952; Browning had longed to go to the Senate, which had been his ultimate political goal throughout his long career in Tennessee politics.  Senator McKellar, eighty-three years old and ailing, chose to seek reelection to a then unprecedented seventh term.  Browning was irked when Congressman Albert Gore opted to challenge McKellar, but the governor still did not think well of a campaign against the formidable McKellar and decided to seek reelection instead.

Browning encountered tough opposition in the person of Frank Clement, a thirty-two year old who possessed a charismatic personality and remarkable speaking ability.  By the conclusion of the 1952 Democratic primary, “Fats” Everett was out of a job again.

Demonstrating an ability to land on his feet, “Fats” was hired as the first Executive Secretary of the Tennessee County Services Association.  The TCSA was the lobbying arm of the county governments in Tennessee and hiring “Fats” Everett was a masterful move.  The amiable Everett, despite his outsized appearance, carried a virtual political encyclopedia inside his head.  Everett knew just about everybody worth knowing in the state and in his capacity as an assistant to Senator Stewart and Governor Browning had done a passel of favors for folks all across the state.

Everett remained as Executive Secretary of the Tennessee Counties Services Association until 1956 when he decided to become a candidate for Congress.  Everett’s opponent in the Democratic primary was Congressman Jere Cooper, then the sitting Chairman of the powerful Ways and Means Committee.  Cooper had been in Congress since 1929 and was well liked inside his district.

“Fats” Everett’s campaign for Congress in 1956 demonstrated both his shrewdness as a politician and his popular appeal.  Congressman Cooper only barely beat back the challenge from Everett.

As it turned out, Bob Everett’s return to Washington, D. C. was merely delayed.  Jere Cooper died of a heart attack on December 18, 1957.  A special election was called and “Fats” Everett, after having run such a strong race against a popular and powerful incumbent, was well positioned to win the Democratic primary.  Everett drew two opponents, yet won the primary contest with a majority of the vote.  Everett took his seat in Congress on February 1, 1958.

“Fats” Everett would remain in Congress for the rest of his life.

Representing a largely rural district, Congressman Everett was a more traditional, conservative Southern Democrat.  Everett excelled at constituent service and took care of his people quite well.  Touring the district in a baggy suit to fit his large frame comfortably and oftentimes wearing a string tie, Bob Everett was highly popular.

Despite not having the seniority of many other Southern Democrats, “Fats” Everett understood both politics and the institution.  Everett quickly gained more influence than others might have under the circumstances.  When Congressman Everett became irritated with a game warden in his district, a Johnson administration official hurriedly wrote the Interior Department to remind them of the “indispensability of Everett to this Administration in Congress.”

Part of Everett’s charm was his self-deprecating humor.  The Congressman frequently said he weighed “one pound less than a ton”.  Muckraking columnist Drew Pearson related that Everett tried to have “Robert A. ‘Fats’ Everett” put on the name plate of his suite of offices, but there wasn’t enough room and he had to be content with “Robert A. Everett”.  One constituent complained and wrote the Congressman to say, “Dear Fats: I’ve never changed the name of a mule, and I’m not going to start calling you by another name either since you’ve moved to Washington.”

Politically, “Fats” Everett missed few tricks.  He moved around his district frequently and remained highly popular.  Congressman Everett faced no opposition inside the Democratic primary in his 1960 reelection campaign.  Everett did draw an opponent in the 1962, but crushed his challenger, winning 41,158 votes to a paltry 3,293 votes.  Everett faced slightly more serious opposition in the 1966 Democratic primary from a candidate named for his late predecessor, but won once again handsomely.

When President Lyndon B. Johnson came to Tennessee to campaign in Nashville in 1964, Congressman Everett was on the platform, along with most every other important Democrat in the state.  Republican strength in Tennessee was beginning to surge and Democrats were united that year.  LBJ, a meticulous organizer, even had all the former living governors of Tennessee at the War Memorial Building that year.  Prentice Cooper, Gordon Browning, and Jim McCord were all in attendance, vestiges of a time that had long gone by.

Young Ned McWherter learned much from “Fats” Everett and even as a youngster, he was admitted into the Congressman’s circle of political and personal friends.  There are those who were close to the late governor who believed McWherter actually patterned his own political career after that of “Fats” Everett.  The Congressman kept his campaign headquarters at the David Crockett Hotel in Union City.  There young Ned McWherter would join Everett and his friends to socialize and plan out their politicking.  The hotel was owned by the parents of Bette Jean Beck, who was McWherter’s wife.  McWherter himself later said he licked stamps and drove Everett around the district during campaigns.  Everett, at 6’4 and three hundred pounds or more, was a colorful role model.

Congressman Everett had once again had no opposition in the Democratic primary in 1968.  It was a year of bitter political strife and Richard Nixon, George Wallace, and Hubert Humphrey all competed for the presidency.  Wallace received a surprisingly large vote inside Everett’s Congressional district.  Despite having navigated the political pitfalls in his own district, “Fats” Everett was ailing.  Only fifty-three years old, Everett was admitted to a Nashville hospital and died from pneumonia on January 26, 1969.

Being a bachelor, “Fats” Everett left no widow or children.  Many others served in Congress much longer than the twelve years Everett served in Congress, but few attained the kind of influence he did so quickly.  Less interested in foreign affairs than doing favors for his constituents and taking care of his people, “Fats” Everett was both well-liked and respected by his home folks.

Those same folks erected a statue that stands outside the Obion County Courthouse.  “Fats” is shown in full regalia, hat and bow tie and all.  The statue bears an inscription of a quote from Congressman Everett that Ned McWherter often repeated himself: “If a man don’t want to work, he hadn’t ought to hire out.”