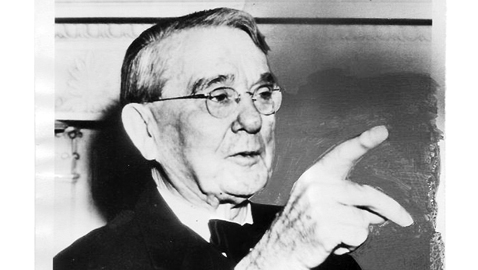 Tennessee’s senior United States senator, Kenneth D. McKellar, was well known for having a volatile temper and had won a well-deserved reputation as a feudist.  It was not uncommon for the peppery senator to become involved in a physical altercation, even as he approached his eightieth birthday.

The winter of 1948 should have been a happy time for Senator McKellar; the Republicans had won control of both Houses of Congress in 1946 on the slogan “Had Enough?”  A Tennessean, Congressman B. Carroll Reece, had become Chairman of the National Republican Committee and the GOP victory had been sweeping in nature.  Loss of control of the United States Senate deprived McKellar of his Chairmanship of the powerful Appropriations Committee, as well as his position as President Pro Tempore.

Tennessee politics had been turned on its ear that same year.  President Harry S. Truman had not been especially popular in the Volunteer State and few believed Truman could win the election.  Not only did Truman face a serious Republican opponent, New York Governor Thomas E. Dewey, but challenges from the left and right of his own party.  Former Vice President Henry Wallace was the nominee of the Progressive Party, while South Carolina Governor Strom Thurmond ran as the candidate of the States’ Rights Democrats, or “Dixiecrats.”

McKellar’s warm personal friend and political ally, E. H. Crump, leader of the Shelby County political machine, horrified by Truman’s civil rights platform, bolted to support Thurmond.  Together, McKellar and Crump had dominated Tennessee politics for quite nearly two decades and the Memphis Boss had shattered their invincibility by refusing to support McKellar’s junior colleague, Senator Tom Stewart, for reelection in 1948.  Crump’s insistence upon backing an obscure judge from Cookeville, John A. Mitchell, had led to the election of Chattanooga Congressman Estes Kefauver.  Incumbent Governor Jim Nance McCord had lost his bid to be renominated in the Democratic primary, losing to Gordon Browning, whom both McKellar and Crump loathed.

The losses suffered by the McKellar – Crump alliance had been victories for Silliman Evans, publisher of the Nashville Tennessean.  Evans had been the chief backer of both Congressman Estes Kefauver and former governor Gordon Browning during the Democratic primaries.

Against his better judgment, McKellar had gone along with his political partner and supported Judge Mitchell’s candidacy for the U. S. Senate.  McKellar did not think Mitchell could win, an assessment the shrewd Crump came to realize himself as the three-way race came down to the finish line.  McKellar broke with Crump to endorse the Democratic ticket, refusing to support the Dixiecrats.

Not only did President Truman beat Tom Dewey, but the Republicans suffered a devastating defeat, losing both the Senate and the House of Representatives.  Joe Martin would be replaced as Speaker of the House by Sam Rayburn of Texas and McKellar would seek to be reelected as President Pro Tempore of the Senate.  Better still, McKellar would once again be Chairman of the Senate Appropriations Committee.

A life-long bachelor, Senator McKellar had long ago sold his home on Peabody Avenue and took up residence at the Gayoso Hotel while in Memphis.  When in Washington, the senator lived at the elegant Mayflower Hotel.  It was in a corridor of the Mayflower Hotel on an otherwise peaceful Sunday evening that McKellar encountered the publisher of the Nashville Tennessean, Silliman Evans.

Evans had strongly backed Estes Kefauver in his campaign to unseat Senator Tom Stewart and had long bedeviled Senator McKellar and Ed Crump.  Needless, to say, Senator McKellar did not like the portly and diminutive publisher at all.

A version of the altercation between Evans and McKellar had been published in the Tennessean and the senator found himself quizzed by Washington newspapermen.  McKellar reluctantly admitted he had struck Evans.

In the version printed by the Tennessean, Silliman Evans had said, “I simply folded my hands behind my back and I did not return the blow as I had no desire to strike the senator in view of his age.”

Evans had little more to say on the topic.

McKellar confessed to inquisitive Washington reporters he knew the Tennessean had published an account of the brawl, but said he had not seen it.  McKellar said he had been coming out of his suite on the sixth floor of the Mayflower Hotel when he saw three men approaching.  Senator McKellar admitted he did not recognize any of the men and paid little attention to them.  McKellar had just reached the elevator when one of the men hurried up to him and grabbed the senator’s right hand, placing his other hand on McKellar’s left shoulder.

“Senator McKellar, Senator McKellar!” Evans had yelled.  “Although we don’t like each other, there’s no reason why we shouldn’t shake hands when we meet.”

McKellar admitted he was “startled” and still did not recognize Silliman Evans who had likely had a bit to drink.

“Who are you?” Senator McKellar demanded.  “What is your name?”

Evans was clearly surprised the old senator did not recognize him.

McKellar still had no idea who was accosting him and repeated his question.

“Who are you?” he thundered.

Evans replied, “Senator, there’s a difference of opinion about whether they are lies.”

McKellar responded by punching Silliman Evans in the face.

McKellar recounted Evans fell back and was carried off by his companions; Evans said he merely took the blow, hands held behind his back.  W. R. Davidson, McKellar’s last Administrative Assistant, told me personally years ago that McKellar had hit Evans, who went sprawling over a standing ashtray in the hotel corridor.

Senator McKellar told Washington reporters, “He didn’t strike back.  But he didn’t appear to resent what I had done.  I lost my temper and for that, I am sorry.  It was an undignified act for a senator.”

Yet McKellar’s repentance was hardly total, as he went on to say, “I regret that it happened but if the circumstances were repeated, I don’t see how I could do otherwise again.”

The incident between Senator McKellar and Silliman Evans was highlighted a few years later by national columnist Drew Pearson, who liked baiting the Tennessean.  McKellar had once damned Pearson in a highly entertaining speech on the Senate floor, calling Pearson every kind of liar known to man.

In his syndicated “Washington Merry-Go-Round” column of October 27, 1951, Pearson gleefully related, “In past encounters, McKellar has tried to bean one victim with a gavel, boot another in the pants, flail another with a roll of newspapers – – – and once he landed a surprise left hook.”

Pearson then went on to report McKellar had tried to use his walking stick to bash Displaced Persons Commissioner Harry Rosenfeld in the head.  Rosenfeld’s offense, according to Pearson, was having “made the mistake of interrupting a McKellar harangue.”

After recounting McKellar only narrowly missing Rosenfeld’s head with his cane, Pearson repeated the old story of the senator having drawn a “clasp knife” and intending to attack a colleague, Dr. Royal Copeland of New York.

Pearson then merrily listed each episode as a “round” in McKellar’s career as a feudist.

The columnist related McKellar had once assaulted reporter Dayton Moore with a roll of newspapers, as apparently the senator had disliked a question Moore asked.

Pearson listed the altercation with Silliman Evans and reminded his readers of McKellar attacking Jack Anderson, then a Pearson associate, for having asked the senator’s age.

Drew Pearson closed his column by saying, “It’s getting so that both congressmen and newsmen find it safer to steer clear of the Senator from Tennessee.”

McKellar, ever truthful, admitted he had thrown Jack Anderson out of his office, a story Anderson later recounted in a book he wrote.  Even McKellar’s colleagues from Tennessee were not safe.  On at least one occasion, McKellar chased Senator Estes Kefauver out of his Washington office.

The McKellar – Evans altercation was merely an escalation of their ongoing feud.  McKellar had also denounced Silliman Evans on the floor of the Senate.  McKellar had been outraged by Evans having testified before Congress and assailing the Crump machine.  Evans claimed that because of the poll tax, it was almost impossible to elect a candidate opposed to the Crump organization.

Senator McKellar cried that the charges made by Silliman Evans were “willfully, deliberately malicious and wickedly untrue.”  McKellar retorted the Memphis machine did not rely upon the poll tax for its existence and prosperity.  The publisher’s charges were, McKellar sniffed, “a base and ignorantly spoken calumny.”

McKellar defended his friend, saying the “splendid” Crump organization “brooks no cheating or dishonesty.”  Senator McKellar went on to say the organization was successful due to Crump himself, ascribing the machine’s influence because of Crump’s “masterly leadership, courage, fair and square dealing and winning personality.”

In 1945, McKellar proposed a Senate investigation into the sale of the Tennessean to Silliman Evans.  McKellar’s probe allied him with his old foe, Colonel Luke Lea, who McKellar had defeated in 1916.  Colonel Lea desperately sought to get his Tennessean back, but after having gone to prison, his financial straights were somewhat dire and he never did manage to wrest his newspaper from Silliman Evans.  Lea was ailing and soon died, but the Colonel’s son and namesake became a warm supporter of the senator.

Evans returned the favor in 1946, going all out to support Edward Ward “Ned” Carmack, son of the late Tennessee senator, against McKellar in the Democratic primary.  Carmack was somewhat unstable, but had quite nearly defeated Senator Tom Stewart in 1942.  Had it not been for Stewart’s huge majority in Shelby County, he would have lost to Carmack.  McKellar was ailing that year and didn’t bother to come home a single time to campaign; the senator’s reelection campaign was run in absentia and he crushed Carmack.

Silliman Evans went to the hospital later that week after his unpleasant encounter with Senator McKellar, where physicians said he had suffered a “cardiac event.” K. D. McKellar was reelected by Senate Democrats as President Pro Tempore of the United States Senate and was restored to the Chairmanship of the Appropriations Committee.

McKellar remained in the U. S. Senate for the next four years, serving a total of thirty-six years in the Senate.  He remains to this day Tennessee’s longest serving United States senator.