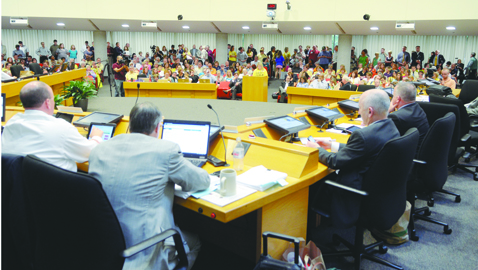 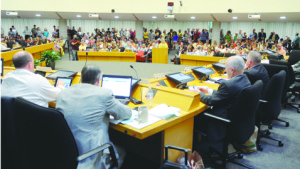 The long debate over Superintendent James McIntyre’s request for 35 million new dollars, requiring a 35-cent increase in the property tax, expired at the recent meeting of the Knox County Commission.  McIntyre’s supposedly visionary budget died a relatively peaceful death as not a single member of the County Commission dared to move to increase taxes.  The Large Assembly Room of the City & County Building was packed to the rafters and Commissioners patiently listened as a wide variety of citizens came to the podium to state their own views on the school budget and a proposed tax increase for education.  As is usually the case, some citizens were more eloquent than others and some were admittedly less helpful to their own point of view when they strayed into plots and conspiracy theories.  One fellow did manage to break the tension with a brief harmonica recital.  Several of the speakers seemed to be school system employees; while others were average citizens who maintained they were having difficulty making ends meet in the current economy.

The vote by the County Commission was anticlimactic after a long and aggressive campaign waged by Dr. McIntyre and his supporters on behalf of his budget request and the taxes to support it.  The Superintendent had an impressive array of resources at his command, with over $40,000 worth of television commercials flooding the airwaves, the constant flow of stories from The Knoxville News-Sentinel and a stream of editorials from the same.  McIntyre received extensive airtime on the Hallerin Hill radio show, as well as most every other media outlet in Knoxville and Knox County.

The Superintendent was supported by the Chamber of Commerce, the League of Women Voters, and a host of tax increase campaign financiers. As the Commission vote drew closer, Dr. McIntyre and his allies believed they held the advantage in getting the tax increase passed by the Commissioners.

Mayor Tim Burchett warned both the Superintendent and the Commissioners that he would veto any attempt to increase taxes, meaning pro-tax Commissioners would need a super majority to override a mayoral veto.  A few of the Commissioners, including Mike Hammond, immediately began pondering increasing the local sales tax, already one of the highest in the nation, or perhaps a combination of increasing both the property and sales taxes to give McIntyre and the school system what they wanted in the way of funding.

Knoxville Focus publisher Steve Hunley, curious about public reaction, launched a series of polls asking Knoxville and Knox County voters their opinions about the proposed taxes, personalities, and issues.  The Focus polls soon attracted the attention of other media outlets and eventually WATE-TV hired the same polling firm used by Knoxville Mayor Madeline Rogero in her successful election campaign last year.  The WATE-TV poll showed virtually the same findings as those done for the Focus; an overwhelming majority of Knox Countians were opposed to any kind of tax increase.  Not a single district inside either the City of Knoxville or Knox County favored McIntyre’s budget if it required a tax increase.  Evidently another poll was released showing Dr. McIntyre’s favorability rating  had plummeted, with only 38% of respondents holding a favorable opinion of the Superintendent’s performance.  It has long been supposed by many that McIntyre was one of the more popular public officials in Knox County, but the long tax battle clearly damaged his personal popularity.

Some Commissioners had almost gleefully stated at the beginning of the tax war their telephone calls and emails were strongly in favor of McIntyre’s budget and the tax increase.  Some of the Commissioners, as well as the Superintendent’s supporters, were growing increasingly uneasy by the weekly polling data being published by The Focus.  There were a few comments crowing about the “spontaneous” outpouring of support for McIntyre and funding the school system from individuals and various groups, but the real spontaneous eruption of support came following Mayor Tim Burchett telephoning thousands of households with a pre-recorded message, urging folks to contact their respective Commissioners asking them not to increase taxes.

Telephone calls flooded the Commission office, keeping the telephone lines busy for hours on end; Commissioners began being inundated with telephone calls and the mail inside their email boxes changed decidedly against McIntyre’s budget and the proposed tax increase.

A few Commissioners, caught by surprise, loudly complained about Burchett having directly appealed to the people.  Commissioner Amy Broyles babbled angrily that Burchett’s actions might be illegal, a delusion quickly squelched by Law Director Joe Jarret, who assured her the Mayor’s actions were well within both propriety and the law.

County Commission Chairman Mike Hammond moved into the self-appointed role of dealmaker and tried hard to broker an acceptable compromise as opposition to the tax increase began to build.  Hammond joined with Thomas Deakins, Chairman of the Knox County Board of Education, to give birth to a conglomeration which increased both the property and sales taxes to provide the school system 31 cents instead of the requested 35 cents, amounting to millions of new tax dollars.  The Focus published the results of a poll asking more than 500 voters about Commissioner Hammond’s chances for reelection and the results were unmistakably clear.  More than 75% of respondents indicated they would not vote to reelect Hammond.  The statistics were enough to scare just about any politician back to reality.

The Commission Chair had been quietly toying with a primary challenge to Burchett and with the financial elite angry with the Mayor, Hammond may well have thought if he was perceived as having saved the day for the school system, it would give him a boost in any bid to oust Burchett.  If so, it seems a fair bet he is badly mistaken as it seems highly likely he could not be reelected to his at-large seat on the Commission and there is even more reason to believe he would be crushed by Burchett in a mayoral primary.

McIntyre and his allies finally realized they were in trouble and enlisted the aid of several local millionaires who quickly ponied up over $40,000 for television commercials promoting the Superintendent’s budget.  The commercials likely not only didn’t help, but also actually advertised the proposed tax increase to thousands of people who hadn’t known a thing about it previously.

Individual Commissioners started to flip flop like trout out of water.  Commissioners Mike Brown, Richard Briggs, and Brad Anders were notable for being on virtually every side, sometimes twice daily.

Those supporters of McIntyre’s budget attending the Commission meeting quickly became mourners, as the tax increase died peacefully in its sleep.  Commissioners did cobble together an additional $7 million, in addition to the $13 million for schools already in Mayor Burchett’s budget for the school system.  In truth, the Commissioners gave the schools only an extra $1.5 million, as the extra $7 million was comprised of $1 million in expected State funds from the BEP; $1.5 million from the school’s own rainy day fund; and $3 million already appropriated by Burchett for a literacy program.  The final $1.5 million was raided from the county’s general fund balance.

In an interesting sidelight, the only former professional educators on the Board of Education and the Knox County Commission, Mike McMillan and Tony Norman, respectively, voted against McIntyre’s budget and proposed tax increase.  Norman issued a blistering indictment of the school system, referring to it as “the society for the preservation of cronyism and nepotism.”

Superintendent McIntyre put on his best happy face and declared it a great day for children and education in Knox County.  McIntyre’s allies did their best to pretend to be happy, hoping everyone would forget the original request had been for 35 million new dollars in tax revenue for a total of $48 million.  It was a brave attempt to put a happy face on what amounted to a devastating defeat.  As there was no tax increase at all, it could only be interpreted as a victory for Mayor Tim Burchett.

The “compromise” put together by County Commissioner Mike Hammond immediately became suspect as the school system announced it intended to start spending the money just as soon as possible.  The school administration announced it was hiring 66 new employees, although it remains to be seen if the funds appropriated by the County Commission are recurring.  A recurring expenditure is supposed to have a continuing revenue source to fund it and despite several Commissioners saying their “intent” was indeed for the increase to be a recurring expense, they failed to attach the $7 million to a continuing source of revenue.

Despite attempts by local media to paint the budget battle as a victory for McIntyre and Mike Hammond, the truth is both emerged from the fracas bloodied.  As Stated before, one poll shows the Superintendent’s approval rating below 40%, while another indicates Hammond could not get reelected to his Commission seat.

Local businessman and philanthropist Randy Boyd had appeared before the Commission and urged them to set aside politics and vote for the huge tax increase, although he candidly admitted those Commissioners who did so would likely “die on the battlefield.” Despite the Commissioners choosing to live to fight another day, there were certainly bodies littering the battlefield and ultimately there is every reason to believe one of the casualties is Jim McIntyre.

The Superintendent was busy making a round of public appearances the day after the vote by the County Commission, anxious to put the best face on things.  McIntyre was busily painting the cheeks of a corpse he hoped no one would ask to hop up and dance.  In an appearance on the Hallerin Hill radio show, McIntyre even boasted about developing a better working relationship with the Knox County Commission, an attitude urged on the Superintendent and members of the Board of Education months earlier by School Board member Mike McMillan.  Not so long ago, Board of Education members had been frequently belligerent when discussing the Commission, although in the wake of the recent vote, they have been oddly muted and meek.

The sad reality is the “compromise” by Commissioner Mike Hammond could almost surely have been worked out by the Superintendent, Mayor Burchett, Chairman Hammond and Thomas Deakins, Chairman of the Board of Education without resorting to a lengthy and divisive budget brawl.  It would have spared the community hard feelings that will certainly linger into the next election cycle, as well as potentially compromise the Superintendent’s effectiveness for the remainder of his reign.  It was McIntyre who chose to fight rather than negotiate and in any fight there is almost always a clear winner and a clear loser.  In this instance, it is hard to debate the big loser was Jim McIntyre.

If the Superintendent and the Board of Education think the County Commission will be more likely to raise taxes next year, just before the 2014 primaries, they will likely set off yet another loud protest from citizens and set a tone for the coming elections.  A cardinal rule of politics is politicians never raise taxes just before an election.

Mike Hammond summed up things nicely when he said, “We have heard from our people.”  It made a real difference.